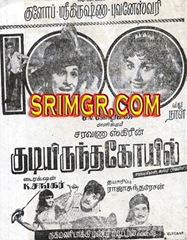 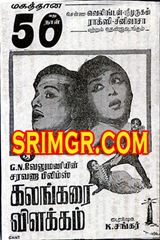 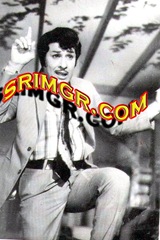 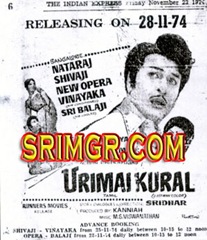 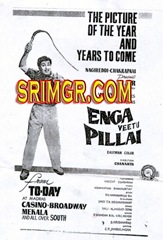 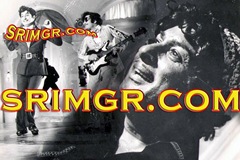 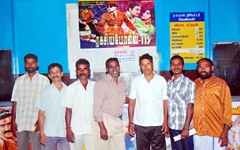 The image is by MGR Fan from Coimbatore V.P.Haridass. We srimgr.com team conveys regards for sending this image to share in our beloved Leader Puratchi Thalaivar MGR Blog. 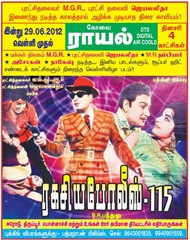 Above image is the ad given in Maalai malar Coimbatore edition. Re-release of Ragasiya Police 115 news was also forwarded to me by MGR Devotee Yukesh Babu.

MGR movie Kumarikottam was re-released in Broadway, Chennai. MGR Devotee Sathya had been to the movie and has forwarded some of the images and videos to share in our MGR Blog. 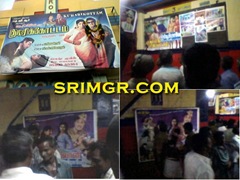 Below is the video captured by MGR Devotee Sathya to share in our MGR Blog. 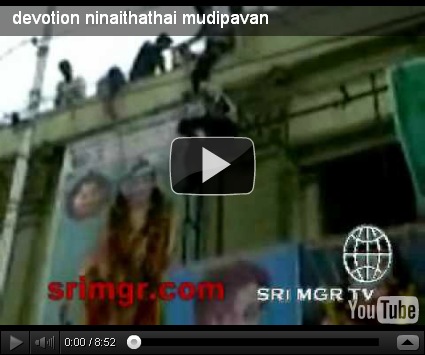 Images and other videos of Ninaithathai Mudipavan and re-release of Kumarikottam in Broadway will be posted soon.

I happened to see Sollungae Anna Sollungae in Adhitya hosted by Imman. It is a comedy program in this a general knowledge question is shoot out to public and how well they answer, and sometimes the compere twist the question to make it more comical.

Yesterday the question was, Who is eligible to receive Bharat Rathna and name four persons who received the award? 11 persons were asked the question and as usual most of them answered wrongly but 6 persons said MGR other 3 recipients name were wrong.

The answer was given by young and old, South Indian and North Indian, man and women. The name MGR is easily related to the highest Indian Civilian Award, though the award was given to MGR posthumously people still remember the award and MGR.

Indian Government conferred Bharath Rathna award to MGR for his public affairs. The award was given posthumously.

Some in internet have projected that the award was given to him for his film career and some feel that the award was given to garner votes for Congress. Some have went to such an extent that they deleted the Certificate of Bharath Rathna which is published in Wikipedia, citing that it has been deleted for the following reason: Media without a source! Such is their hatred, MGR is a Bharath Rathna i.e. Jewel of India even they like it or not. They can only delete the image but not the image, MGR has left with us.

For them I also say that the award is given to MGR’s contribution to Tamil Nadu people, he served well than other politicians. 24 years after the award he is still regarded as God of the Poor and downtrodden, the best Chief Minister of Tamil Nadu. 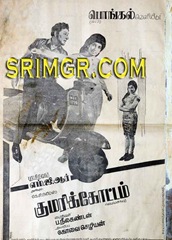 Sri MGR Year 95, 23rd June, Saturday
A rare image of Periyar and MGR forwarded by Dhalapathi Raj, this same image was scanned and posted in Facebook by him.
Puratchi Thalaivar MGR visited Thanthai Periyar when he was admitted in C.M.C. Hospital during 1969. This above image was taken from Viduthalai and the same image was scanned and sent to me from a book to share in our MGR Blog.
We srimgr.com team thanks Mr.Dhalapathi Raj for giving a chance to upload this rare image. 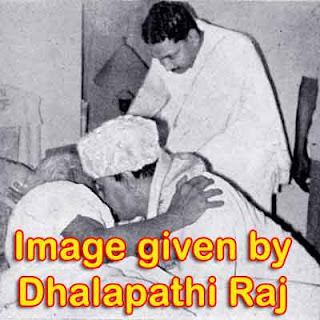 MGR movie Ninaithathai Mudipavan was re-released previous week in Mahalakshmi theater. The video below was captured by me for the Friday matinee show.

The video clip is the meeting of two MGR characters Sundaram and Ranjith. All the persons will be in different costumes and Sundaram is mistaken as Ranjith. And when real Ranjith comes up for the function he has another plan.

The character Ranjith is a diamond smuggler he uses his look like Sundaram against Police. Here in the video clip, look how Ranjith character played by MGR, dominates Sundaram right from the start through his body language, dialogues and camera angle. People enjoyed the dashing entry performance of MGR as Ranjith, unique to drama introduction.

After this movie release many MGR Fans christened their new born male child as Ranjith. 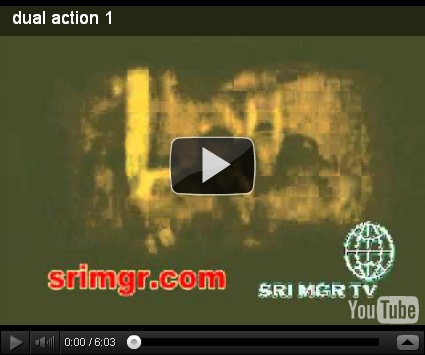 The above video with animation of Larry is about the antics of MGR for this particular scene. 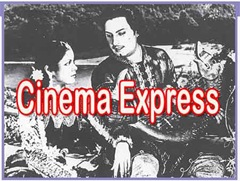 Two page review was published and below is the review that have appeared in Cinema Express. 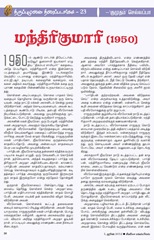 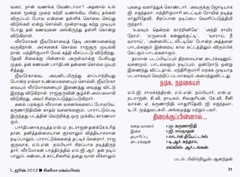 Though MGR acted in the leading role but more importance was given to Villain character. Even the Director Ellis Duncan kept a long shot to show MGR’s expression in the Durbar scene. This shows how much the Director tried his best to hide MGR’s talent. But MGR’s swashbuckling kept him ahead of others.

MGR dual action movie Ninaithathai Mudipavan was re-released this week in Mahalakshmi theater. The video embed here is from the Friday matinee show that I have captured.

The below video is the song scene “Poomazhai Thuvi” smaller version. 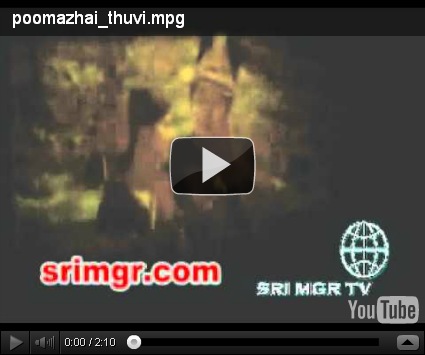 The Sunday evening show was housefull, the images and videos captured by MGR Devotee Sathya will be uploaded soon. The collection till Sunday night show is Rs.40000 plus. Some one asking for proof for housefull show and collection contact the Otteri Nadigar Thilagam fans who will tell you the same, that will be more authentic.

The above video has 30 second animation followed by the song.

Veteran actor Radhakrishnan popularly known as Kakka Radhakrishnan passed away on 14th June, aged 86. He was survived by his wives, five daughters and three sons.

Kakka Radhakrishnan hailed from NSK Drama troupe with remarkable antics and comedy timing have acted with our beloved Leader Puratchi Thalaivar MGR in Devar films Thaiku Pin Tharam. He was given a comedy role in that movie and MGR allowed his comedy scene during his silambam fight. That much importance was given to Kakka Radhakrishnan.

We srimgr.com team prays for his soul to rest in peace. 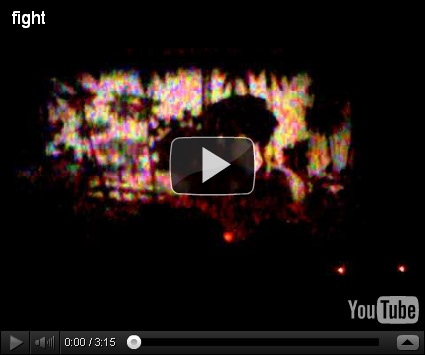 MGR dual action movie Ninaithathai Mudipavan was re-released in Mahalakshmi theater this week. I went to the matinee show yesterday and captured some videos. Here is the one video captured during the first scene of the movie. 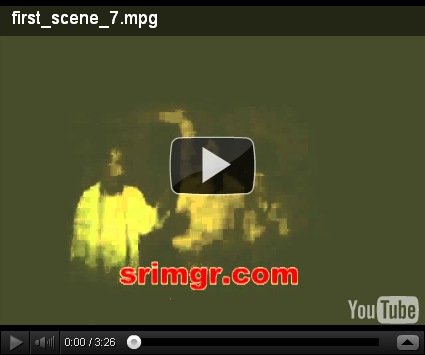 The print was good but not excellent I have uploaded 70 MB version of the first scene.

The scene is intro of Sister character Saradha, after the rejection and humiliation you can see how MGR reacts in that two seconds, no close up shot to show his facial expression and two steps by MGR to comfort her with words and finally a brother hug. Also watch how MGR fans react to that scene.

The titles appear over Two Leaves symbol the first MGR movie to show the ADMK victory symbol. The movie was released on 9.5.1975 all over South. 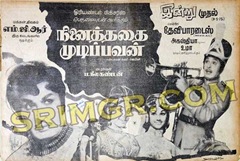 Sri MGR Year 95, 15th June, Friday
MGR Devotee Tirupur Ravichandran has forwarded some tit bits (1 to 4) about our beloved Leader Puratchi Thalaivar MGR.
1. Previous week Southern movies Baghdad Thirudan was re-released in Coimbatore Royal and did good business. The overall collection for one week is Rs.81,000/-
2. Today KTV telecasted Enga Veetu Pillai in High Definition and the print was so sharp.
3. Today Daily Thanthi carried an ad about the coming of Oli Vilakku to silver screen. The ad is given below. 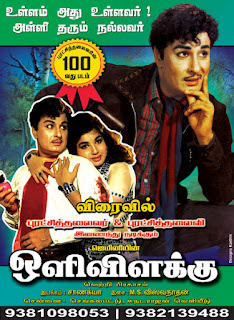 4. Times of India dated 10.6.2012; in Section: Times City; Page: 4 has published an article about the rivalry of Puratchi Thalaivar MGR and Nadigar Thilagam Fans. The important participants are S.S.Perumal from Kalaiventhan MGR Bakthargal Trust and Murali from Nadigar Thilagam Fan group.
The link is
http://epaper.timesofindia.com/Repository/ml.asp?Ref=VE9JQ0gvMjAxMi8wNi8xMCNBcjAwNDAx&Mode=HTML&Locale=english-skin-custom
5. Oriental Pictures Ninaithathai Mudipavan was re-released in Mahalakshmi theater this week. I went for the matinee show and the print was good. The videos and images will be uploaded in the next post. I saw nearly 450 members for the matinee show the ticket price is Rs.13 and Rs.15. 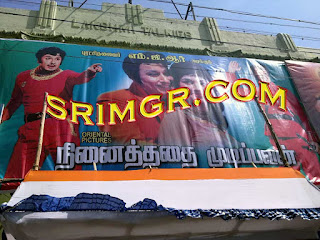 No garlands! (time - 2.30 pm.) Some of MGR Fans were fixing MGR Fans club banners when I entered the theater.
Posted by Roop

MGR movie Baghdad Thirudan was re-released in Coimbatore Royal. Olikirathu Urimaikural Photographer has forwarded some of the images he had captured during the evening show.

Sri MGR Year 95, 8th June, Friday
A Nadigar Thilagam fan has commented in our site, thinking degrading our beloved Leader Puratchi Thalaivar MGR as 420 and the Chief Minister of Tamil Nadu who was preferred now and in 1989 elections, is the right way as an answer to Karnan success.

We srimgr.com team strongly condemn the person, a separate post has been published for his act. Below is the link, click the link and give your valuable comments.

The news and image was forwarded by MGR Devotee Tirupur Ravichandran to share in our MGR Blog. 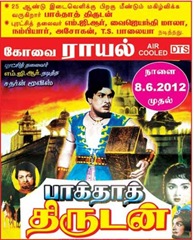 The highlight of the movie is the disguise MGR used as an old man, using a false nose and fat body make up which was uncommon at that time.

Same movie was released recently in Dindukal and the same was posted click the link below.

Previously Enga Veetu Pillai, released in Royal Theater Coimbatore and which one said that the movie has no re sale value nowadays due to the story line and MGR costumes, the distributor has struck the gold mine and the collection is Rs.80000 for one week.

Re – Release Alibaba Part I

Modern Theaters first colour movie Alibabavum Narpathu Thirudargalum was re released in Mahalakshmi theater this week. For the first time the movie was released on 14.1.1956 all over South. 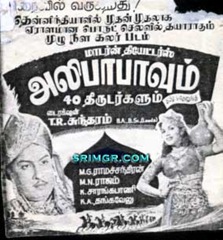 As usually MGR Devotee Sathya forwarded the images and videos to share in our MGR Blog.

Below are some images.

A thin red line is added to differentiate the two images.

A section of the crowd and a close up of Alibabavum Narpathu Thirudargalum Theater Banner.

Here is the video showing the devotion of MGR devotees with an animation of Larry King show. 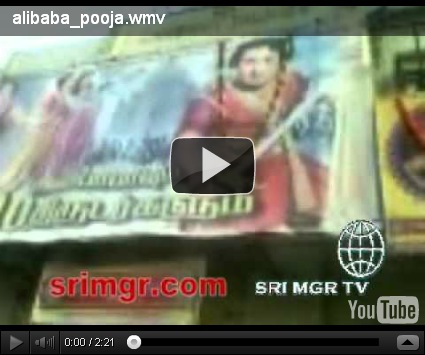 As said earlier MGR Devotee Sathya has given me the images and videos of Kalangarai Vilakkam movie, which was released in Mahalakshmi theater previous week.

The print was not that good you can verify it in the below video. 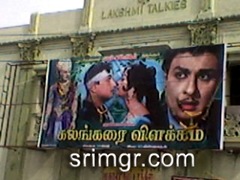 The above image was taken on Monday 3 pm. The garlands are dried by the intense heat. 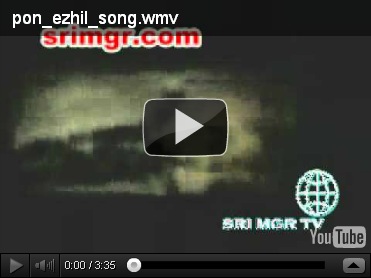 Pardon for the picture quality. Other videos will be posted soon.