In the earlier post we had given a detailed account on how our beloved Leader MGR faced the challenge of implementing the Nutritious meal scheme and how he succeeded, this episode will give you the exhaustive information about the first election victory.

Sorry for the inconvenience.
The Post I have published here is been published as a Book. Publication date of the book will be conveyed soon.
Thanks for visiting my site. 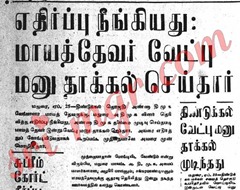 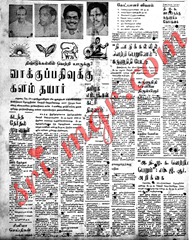 Like in MGR movie Nallavan Vazhvan, (when the result was announced without knowing who had won, M.R.Radha and his men start to celebrate) the members of Syndicate Congress in Madurai by 11 am, announced that they are leading by 9,000 votes and started to celebrate by bursting crackers. When the announcement came their celebration stopped below is the newspaper cut. 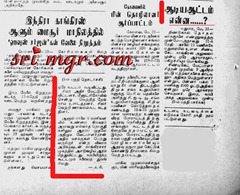 Aftermath of ADMK first victory will be dealt in separate post.
Posted by MGR Roop

Our beloved Leader Puratchi Thalaivar MGR followed the footsteps of his mentor Peraringnar Anna who had faith in ‘one caste and one God’. Likewise MGR believed in his mother. He said that his mother is his God.

Incident one: Nadodi Mannan the first directorial venture and production for MGR and for Emgeeyar Pictures was launched in Vauhini studios in Raghu kalam. His well-wishers asked him to select an auspicious time for the start of the shooting which Puratchi Thalaivar MGR retorted, my mother will sustain me for my success, I will not care for other thing. The movie turned out to the highest grosser of the year 1958.

Incident Two : For filing of nomination for the Madurai West constituency in 1980 general election, against his well wishers MGR filed in Raghu kalam. As we all know that the 1980 election is a critical part in MGR life. As his rule was dismissed on February 1980 and election was announced to be conducted on June 1980. As he believed in his mother, she guarded him and made him victorious, MGR regained his position as the Chief Minister of Tamil Nadu.

MGR followed what he preached in his movies. There are numerous instances from his movies which showed his preachings against superstition. I will give two instances, one the scene in Olivilakku, MGR and Sowcar Janaki conversation, when MGR gives the idol of Murugan to her for worship. And another instance  MGR asking his boss Asokan (he was poverty stricken at that time) to head the open ceremony of his new business, for which is co workers try to say that Asokan is not lucky, MGR answers to them and also to Asokan regarding unluckiness.

Below is the article written by R.Govindaraj as said by his father and one of MGR’s bodyguard K.P.Ramakrishnan, which was published in Malai Murasu, Chennai edition dated 23rd December 2010.

We have already published an article on MGR’s patriotism said by MGR’s bodyguard K.P.Ramakrishnan, written by R.Govindaraj. This is the continuation to that post, the article which was published in Dinamalar, Vellore Edition dated 26.1.2014.

Those days MGR was stamped as member of Dravidian party. The DMK party one great agenda is to split Tamil Nadu from India and to create a separate nation. And all of us know the fact that the agenda was later dropped by the DMK Party chief Peraringnar Anna.

Our beloved Leader Puratchi Thalaivar MGR was first person to respond for the speech given by the then Prime Minister of India Pandit Jawaharlal Nehru in radio, who asked to donate generously for the Indo China war. MGR announced that he will give 75,000 rupees and as an advance he gave 25,000 for the war effort. MGR gave that cheque to the then Chief Minister of the Tamil Nadu state Kamaraj, who acknowledged MGR’s generous donation and heartily praised MGR.

Second generous donation given by MGR for the war fund is for the Indo Pakistan war that happened in 1965. He donated 10,000 rupees to the Chief Minister of Karnataka, who had organized a ceremony for the war fund in Sivaji Nagar, Lal Bahadur Stadium.

MGR’s helping hand not only extended for war fund, but his hands also extended for help even for natural calamities, he generously donated sums of money. One such is the three southern states Tamil Nadu, Kerala and Karnataka suffered intense flooding in 1961, MGR gave his three days Madras collection of Sabash Maapillai movie to the three states. The amount collected is Rs.17,500. The amount was split and given, Rs.10,000 to Tamil Nadu, Rs.5,000 to Kerala and Rs.2,500 for Karnataka.

When MGR went for the shooting of Adimai Penn in the year 1968 in Rajasthan state of Jaipur he came to know the drought and donated Rs.50,000 to the Chief Minister of the state. 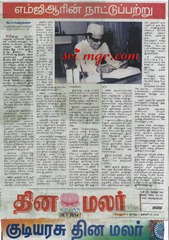 For more information click the above image to read. 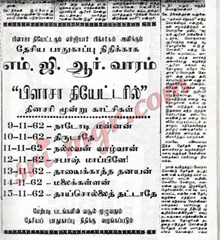 K.P.Ramakrishnan narrates the interesting incident involved by Nari Kuravar community visiting MGR’s home in Ramavaram gardens and how MGR showed his affection towards them.

The scanned image of the Devi magazine was shared to our MGR blog by R.Govindaraj. 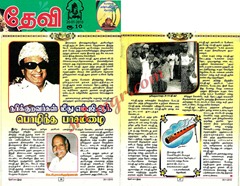 Many MGR fans and devotees choose their cell/mobile number ending with 4777. Someone having a car will pay to get their car registered as 4777, some even wanted to get that number for their bank account. 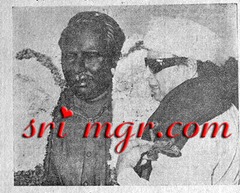 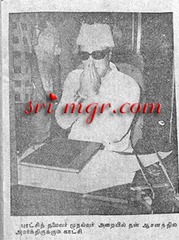 So then why 4777 is a divine number for MGR devotees and fans?

Puratchi Thalaivar MGR entered the Assembly proceedings on 4th July 1977 and all the elected legislative members took oath in Tamil Nadu Assembly on that day.

Twenty years back I got a bus ticket ending with 4777 but I did not preserved it. Then whenever I get the ticket I use to check the ending number. Couple of months back when I logged on to our MGR blog I was the xxxx4778th person to view the page. Just one number less than 4777. Recently when I logged on to srimgr.com the page view counter showed xxxx4775, after some seconds I re logged on to and I was on the xxxx4777th page viewer. Below is the screen shot.

Click to enlarge the image. Felt something divine for me on seeing the number. Anyone having such an experience of getting the number 4777 please share with us by sending an email to replytomgr@live.in including the scanned image.

Sri MGR Year 98, 2nd September, Wednesday
This is the new series that I am going to write about MGR, the challenges he had faced during his career as the Chief Minister of Tamil Nadu.

Recently MGR’s bodyguard K.P.Ramakrishnan article about the Nutritious programme beginning was sent by his son R.Govindaraj. Below is the article. Detailed information of the Nutritious meal program is Post is published as a Book. Publication date of the book will be conveyed soon. 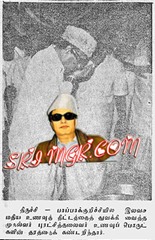 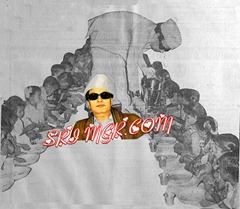