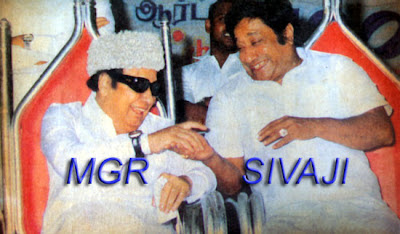 I was reading thread dedicated to Nadigar Thilagam (Sivaji Ganesan) the MGR's arch rival in Film (only) and one person named Rakeshkumar with his website (http://rakeshkumar7.tripod.com) gave an entire page about all important actors of World Cinema including Sivaji Ganesan, I was disappointed at first why not MGR, he is not worth to be included. I wrote to him, he gave the reply – the reply which showed his Love to MGR. the mail follows:
(Email)

As you may have noticed, my website is mostly about Hollywood and I try to write as much as I can on Tamizh film industry.

I am crazy about Sivaji. Period. I used to be an MGR fan (from before his death), but I ceased to be interested in him as an artiste. Nowadays, I am more interested in him as a person. He is a mysterious figure. I don't think anyone really knows who he is. Only he does. And I try to read about him. But unfortunately, all I read is what we all know....how a good samaritan he is, how he helped others, etc.

I want more information. And I don't know. I think of myself as a student of a subject called MGR. A great, mysterious subject that takes volumes of encyclopedia to describe.

Of course, when time comes I'd like to write about MGR in my site. As far as actors are concerned, there are four major stars who have impacted the industry - MGR, Sivaji, Kamal and Rajini. I will certainly be writing about them one of these days. But as you may have noticed, my site has not been updated for a long time. When I am active again, I shall write about him.

(The thread about MGR)

Wherever you are, today is the day, ninety years ago (or is it?) you were born. You were sent here on a mission. A mission that you, only you, know what. We know some, we have seen some, we have read some, we have listened to some.

But there is more...only you know that. You were loved, you were respected, and you were despised. More loved than despised. Those despised you had issues, that's all. But they will agree the power you vield over millions of hearts. The power of love.

How many just wasted their life away when they learned that you are no more. Why? What have you done to them? Those flickering images on screen. The seat of power that you sat on. That smile. That graceful wave of hand. The assurance of goodwill. The assurance that all will be alright, for you are here.

And then, you were gone. Blank. Tamil Nadu, Tamil film industry has not been the same again, good or bad. My father is a poor man. He had nothing to hand to us brothers, but the love for cinema. We inherited that plus a little bit of the greatest treasure of his called, "MGR Fanatiscm".

In my teens, I was so absorbed by your films and songs. I am now a bigger fan of your 'brother' Nadigar Tilagam. But the funny thing is, now, after fifteen years, I have difficulty recalling lyrics of NT's songs, but at the snap of the finger, I can recall the lyrics of all my favourite songs of yours.

Why? Then, I was crazy of you. Now, I am intrigued by you. I grab my hand on any literature about you. I learned so much about you. But the more I learn, the more I realise that I don't know who you are.

You are, to us, what you want us to know. You kept the rest of you to yourself. And what we know is the image of one of the greatest person ever to live in this planet. That is all we know. And that is all we need to know.

Sometimes back, I swore never to write in this thread of yours...thanks to some unnecessary arguments. But I take that back. I take it back, because you wouldn't like it. You would want me to learn from others in this thread, and share my own love for the world you created for us with the rest. I shall. I abide by your often spoken rule on 'sharing'.

So, my dear Puratchi Thalaivar. Many happy returns of the day. You are not here, but you are there, somewhere, watching us kids with that enigmatic smile of yours.

Your once fan, and now, student,

Tamil Years Day I got some spare time to work with remixes. So I decided to go through some MGR songs and one son "Nan Yar" from Kudieruntha Koil was very close to Michael Jackson's "Bad" song. MGR giving serious or angry look is very rare; he always gives a cool smile even in fighting scenes.

In this song he has serious look which suited the Bad song. I tried my level best to bring the Intro, prelude and end into one but unfortunately there was missing in continuity. Please pardon me this is my first big song. And I pray to MGR who is a good editor to forgive me what I had done to one of nice song. 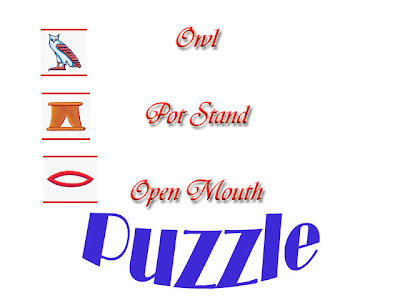 The picture above represents three symbols which we all see in our daily life. The first symbol is Owl, the second symbol is Pot Stand and third one is Open mouth. Can you tell me what this is? And also what these symbols represent and were it came from.
Posted by Roop No comments:

Yet another Remix a long one!

I have an ambition to produce a movie starring MGR with help of Computers. Way back in 1999 the Hindu gave an article of Pentafour a software company planned to develop a Computer Generated MGR and Raj Kapoor. They went into an extent of MGR's teeth nature. But so far there is no news about the movie.

With a PC config of 2.6 GHz it is not possible for me to create a high end film, but I can satisfy myself with remixing the song. If you watched this blog regularly there are some remixes. This one remix I used a little bit of editing knowledge to sync the lip movement of the children in the song with Michael Jackson's "They don’t really care about us".

It took me 3 hours to edit this 48 seconds video clip which I cannot go beyond this level due to space constraints and upload problem. And as usual please forgive me for the film clip quality.

Another Remix Song of MGR

As I got some spare time, I did a remix with my favourite film "Ulagam Sutrum Valiban" with Michael Jackson song, though the Video clip was 28 seconds and some title effects and sound effects it came to 3 MB file size, as I am having dial up it will take 45 minutes to upload the video, so I minimized the frame size and the usual WMV format to dial up, this came to 900 KB which was easier to upload. Sorry for the poor quality of the movie clip. Enjoy and comment. (Your comments make me to work hard)

I went through Google analytics and found that most of my Blog viewers i.e. 96 % are using broad band so they won't find any difficulty in downloading and watching the movie clip.