Few years back I read an article in Kumudam Magazine which exhibited Peoples mental attitude and their behaviour in public places. Kumudam publishers placed a small temporary shop selling Bananas and no one to attend; just a board stating the price and a Large Photo of Father of the Nation (Mahatma Gandhi). Kumudam staffs watched over, did all the people correctly paid? Or did they cheat as there is no person to look after?

But to their astonishment all the purchasers honestly paid for the banana and put the money in the cash box. Kumudam published this scenario in their weekly magazine. That the Photo of Mahatma Gandhi is the sole reason for the sincerity

I witnessed the same kind of scenario, a person scurrying along a main road with a cigarette in his hand, all of a sudden he stood still, his hands went back, head drooped like as he did a mistake before a Master, and walked slowly away – on that place is pasted Cinema Poster of MGR starrer film!

Another one happened a few months back, a person whose head cleanly shaved and carrying a yellow bag (goes without saying a Villager) was nearing a Jeep a MGR sticker on the Windshield and ADMK flag on the Hood. He did a salute and kissed the flag as a revered object. Their goodness of Character left by Mahatma and MGR creates the propensity of Goodness in human.
Posted by Roop 2 comments: 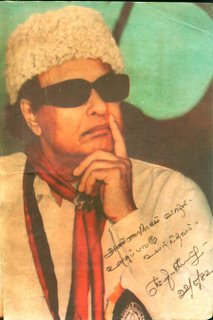 Every celebrity casts autographs to their fans scribbling words like "with love", "yours" etc., did these words come from the heart or did they tell any thing to us and that the words will cherish in our lives.

(Thanks for the translation work of Viju)

Greatest are those who work hard.

The autograph gives us the insight how he loved his Mentor "Anna Durai" shortly and lovingly called "Anna" (also termed as Elder Brother in Tamil) and the message "Greatest are those who work hard" (a Hard worker).

Those who have the knowledge about Hand writing analysis look carefully the letters, the spacing, and the upward trend in signing. Did you notice any negative sign in his Signature?

His nature of likeness to be with others are very well revealed in spacing of the letters, and even placement of words to his neatness of work or personality. And then the numeral 2 written in two different ways simple 2 and embellished 2. Maybe it tells about his enigmatic nature.

Even his signature tells his character and makes us to follow what he said. 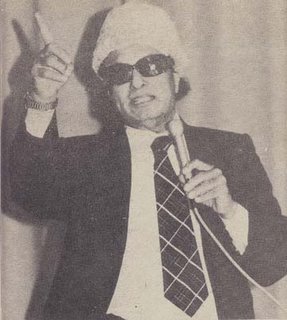 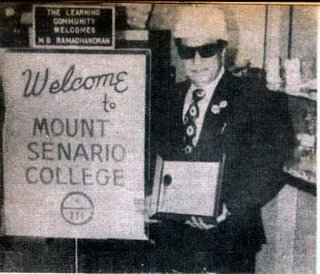 MGR I SAW HIM

The Year was 1975, I had an assignment from Film World, (now Mumbai), and to interview MGR. Till then I had not met the great star in person. So I was in a fix.

I had been seeing almost all his starrers as also reading a lot of pro and anti writings on him. Unwittingly influenced by political speeches, I never developed a desire to cultivate friendship with him. However, for the Film World interview I had to establish a contact. And I did meet him. That was my turning point, a correction of a deceptive conviction, a metamorphosis of the MGR image that loomed in my mind till then!

I met him in his Arcot Mudaliar Road residence (Now MGR memorial) there was a large crowd comprising party workers, favour seekers, fans and film personnel. I lost hopes that I could meet him at all, because I did have absolutely no influence there. That feeling was further fanned by my inherent prejudice!

Hardly had I waited for ten minutes. Muthu (now the Care taker of MGR memorial) his valet came to me. "Thalaivar (Leader) calls you in". I was ushered into the august presence of MGR, sitting behind his desk, cap-less, make-up-less, clad in a sleeveless banian and lunghi. He looked as handsome as in his moves! That was my first shock!

He enquired about my calling, welfare, family and only then permitted me to begin the interview. (Note MGR's nature when interacting) We talked for an hour. All my questions, some political and hence irritable, he answered patiently.

I came out, a totally changed man. My ambiguous and ill-founded impression about the great star, nay the great human vanished. In its place, I installed the 'MGR' as I really saw him. Then only I understood why millions in the country owe everything to him. He deserves it! Thereafter I had the good fortune to be with him for shooting at (Capital of Karnataka) and Ooty (hill resort) I was an eye witness to the perennial fountain of generosity that MGR is.

"I came into the world as a have-not. Let me depart also so" He said. Had he wished, he could have owned half of city (Now Chennai) with his fabulous earnings! But his munificence always overtook his income! Well, Sir, now the whole state is in your balanced hands!

MGR has given new interpretation to the word PHILANTHROPY. No dictionary can improve upon it, ever!

The interview of 1975 was titled "MGR – next Chief Minister of Tamil Nadu" It was no clairvoyance on my part. Any one who knows this great leader even casually would have attested my view. The State of reached a stage when it had to be reclaimed by a strong and soft hand. Only MGR possesses that! And, we, the people of Tamil Nadu today experience the niceties!

This is an extract of the Journalist experience when MGR came to Power in 1977.