In the year 1971 MGR movies such as Kumarikottam, Rickshawkaran, Neerum Nerupum and Oru Thai Makkal (5 years under production) were released. In the same year Tamil Nadu saw the General Election DMK with MGR won the Election. And in movie career MGR won the best Actor Award (Bharath Award) for acting in the movie Rickshawkaran.

29th May 1971 – 29th May 2011 40th Anniversary for the movie Rickshawkaran a special post by MGR Devotee S.Vinod from Bangalore.

Early morning MGR’s Grandson MGCB Pradeep informed me about an article that has been published in Deccan Chronicle about MGR’s temple. And subsequently MGR Devotee Sailesh Basu also forwarded the article to be shared with our MGR Devotees and MGR Fans in this Blog.

Below is the article published in Deccan Chronicle.

May 28: Perhaps in tune with the changing times, L. Kalaivanan, an ardent fan of actor and former chief minister M.G.Ramachandran (MGR), has built a temple for yesteryear actor at Tiruninravur, near here. Though he has no political affiliation, he has sold his property and almost mortgaged his wife’s jewels to build this temple for which the kumbhabhishekam(consecration) is expected to take place in August.

A newspaper sub-agent, Kalaivanan, 52, used to profess his love for the matinee idol by distributing key chains and stickers with MGR photo to all his followers. But with his wife Shanthi’s encouragement, he decided to construct the ‘Arulmigu MGR Aalayam’ on 1,800 sq ft of his personal land at Nathamedu village, in Tiruninravur. The project has so far cost him Rs 16 lakhs, of which Rs 1 lakh was received as donation from MGR fans. While painting work remains to be completed, Kalaivanan said, the two idols, one in white marble measuring six feet and another in black granite, measuring 0.5 ft, that he has ordered for Rs 1.9 lakhs from Rajasthan, will arrive on June 20.

“The small idol will be offered abishekam every day, whereas the bigger one, dressed in dhoti, shirt, cap, spectacle and watch, will be in standing position blessing people all the time,” he added.

However, Nathamedu panchayat president M. Viswanathan, also an MGR fan, told this newspaper that people concerned with the construction of the temple have not approached the panchayat for approval. “If they follow procedures in building a temple that will have patronage from the locals, then we have no objections,” he added.

MGR Devotee from Bangalore S.Vinod has forwarded the scanned copy of Kalki magazine to share in our blog. 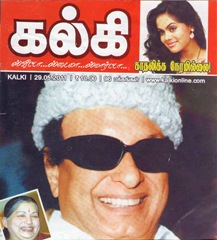 It is about MGR’s vote bank which aided the victory for ADMK. The cover has the enchanting smile of our beloved Leader Puratchi Thalaivar MGR. 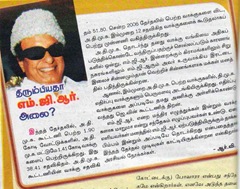 As mentioned in the article there are some people who still think there is no Vote Bank for MGR. This article rightly points out that mistake.

Olikirathu Urimaikural has published an Election special Book about MGR’s Victory from 1977 to 1984 General Elections.

And update on this month Urimaikural Magazine May 2011. 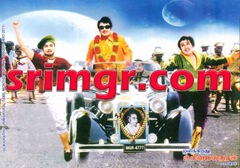 When It’s MGR, Hyperbole Is An Understatement

MGR Devotee S.Vinod called me this morning and informed that there is an article published in Indian Express written by Shampa Dhar-Kamath about our Beloved Leader Puratchi Thalaivar MGR. I am presenting the article as it is appeared in the Newspaper Indian Express.

He was in the midst of an important phone call. It was a Sunday, and he’d been chilling at home with his family when the office called. The wife asked the kids to put the TV on mute and picked up a book. There was obviously a crisis at work, and the man was barking instructions down the line to whoever had called. This went on for about 15 minutes.

Then, suddenly, the wife heard his voice change. “I’ll have to call you back; something urgent has come up,” the man almost-shouted into the phone and quickly put it down. She looked at him in alarm. Was he feeling ill? He’d had a heart attack the previous year, and she was always worried about him.

But no, he looked all right. Nor did he head for the bedroom or the bathroom. Instead, he rushed to the TV and turned up the volume. Legendary Tamil song Naan Anai Ittal blared out, and MGR — in full make-up and red and white shoes — burst into the room dancing, wielding a long whip. The man had been watching Tamil news when the office called. Clearly, the news had ended, and an entertainment programme had come on.

The father matched MGR move for move. He snapped his make-belief whip in the air, jumped up and down sofas and tables, pulled his wife out of her chair and danced her around the room. His Delhi-born children stared, open mouthed. They’d heard their father talk about someone called MGR and knew he was a famous Tamilian actor but that was the extent of their knowledge.

They didn’t know that their father, like most people born in Tamil Nadu in the 1950s and 60s, had grown up on a staple of MGR films. That he’d spent his youth romancing and fighting and dancing to the superstar’s songs. That, in 1967, he’d gone with his parents to join the crowds outside the hospital where MGR lay with a bullet lodged in his throat. And that, 20 years later, he’d wept as he watched his hero making his last journey around then-Madras. Not that he was the only one.

Twenty-four years after the death of Maruthur Gopalan Ramachandran aka MGR aka Puratchi Thalaivar (Revolutionary Leader), the charismatic actor and chief minister of Tamil Nadu, the mythology refuses to melt away. Re-runs of the old movies run to crammed houses, and new movies like Aayirathil Oruvan pay homage to his songs. People still show up at his memorial at Marina Beach every January (when he was born) and December (his death anniversary).

Just like it was with his films, hyperbole is an understatement when it comes to the Thalaivar, described once as “someone with the movie magic of John Wayne, the political success of Ronald Reagan and the messiah appeal of Martin Luther King Jr.”

If there’s any relief for the movie-going public of Tamil Nadu at all, it’s the fact that god’s given them Rajinikanth. But that’s another story. For our man in Delhi, meanwhile, the Tamil songs continued. Athai magal came on, and he twisted and lurched with MGR. His god could be in heaven, but all was right with his world.

This week three MGR movies were released in Chennai. The movies are Nadodi Mannan, Kudumba Thalaivan and Kumarikottam. 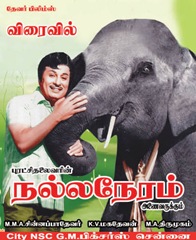 All these images are taken from today's Daily thanthi Digital Edition.

The people of Tamil Nadu are rejoicing the Victory of ADMK. My friends those who are MGR Devotees and MGR Fans were contacting me before and after the Elections. Even Mr.David from France contacted me (early morning time in France) before election and wanted to know the trend that is happening in Tamil Nadu.

MGR Devotee from Bangalore S.Vinod has forwarded a special post on the Victory of MGR’s party ADMK in the recent elections. 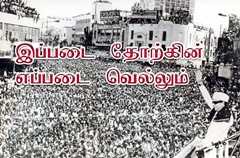 MGR in his biography “Nan en piranthen” written about seeing Mahatma Gandhi in person, how we felt when we saw MGR in person is the same MGR experienced when he saw Mahatma Gandhi.

Further chapters MGR mentions about the rift between Gandhiji and Subhash Chandra Bose during 1939 when Netaji was elected as Congress President by defeating Dr. Pattabhi Sitaramayya.

Today is International Workers Day or Labour Day. In MGR movies many songs were composed on labour and working class. Even MGR signs his autograph as உழைப்பவரே உயர்ந்தவர். 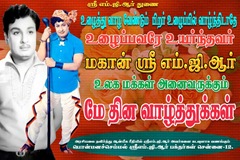 The above image is by MGR Devotee Venkat he has forwarded the image to share it in our blog for the International Workers Day.

May Day wishes to all our Blog Reader by srimgr.com team.