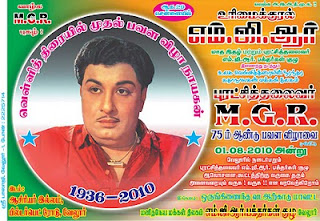 United North Arcot District Manitheneya Makkal Thilagam MGR Bakthargal Kuzhu has invited all MGR Devotees and MGR Fans to partcipate in the Fans meet for the Platinum Jubilee Celebration. MGR Fan MR Raamamoorthi of Vellore has forwarded the above image for the upload in our blog.
srimgr.com team wishes them success for the Meeting that to be held in Asiriyar Illam Vellore on Sunday 1st August.
Posted by Roop

Email ThisBlogThis!Share to TwitterShare to FacebookShare to Pinterest
Labels: vellore 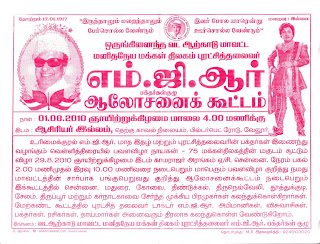 Platinum Jubilee Celebration for MGR Fans meet for Vellore District will be held on 1.8.2010 at 4 pm in Asiriyar Illam, South Police Station, Vellore, Mr.Ramamurthy is conducting the MGR Fans meet in Vellore, Important MGR Fans and MGR Devotees from the Districts of Chennai, Madurai, Coimbatore, Dindukal, Thirunelveli, Tutucorin, Salem, Tirupur and Bangalore will be participating in the meeting. Mr.Ramamurthy requests all MGR Fans and MGR Devotees to attend the MGR Fans Meet and make it a grand success.

MGR Fans meet for the Platinum Jubilee Celebration was held in Salem and Thirunelveli. 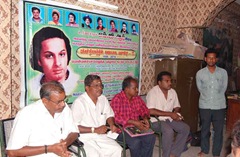 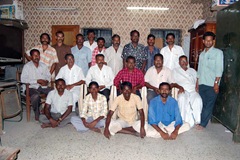 MGR Fans association from Thirunelveli, Tutucorin and Kanyakumari took place in Chandra Vilas Meeting Hall, Salaikumarasamy Koil, Thirunelveli on 11.7.2010, the meeting was presided by N.Arumugam, the Chief Guest was Vellore Ramamurthy, S.M.S. Jalli, S.Anand, Pa.Ilammathi (he was the President of MGR Fans Association for Nellai District from 1972 and now in ADMK party) 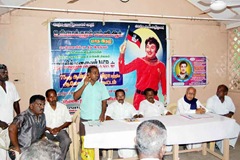 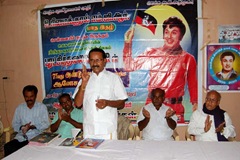 Nearly 100 MGR Fans attended the meeting and they pointed out various opinions and suggestion for the Platinum Jubilee Function. 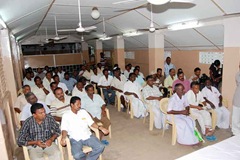 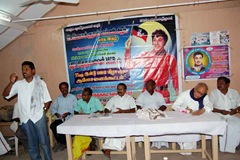 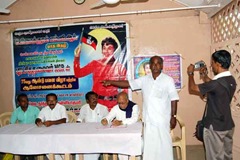 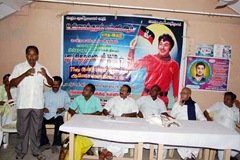 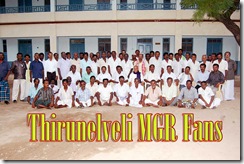 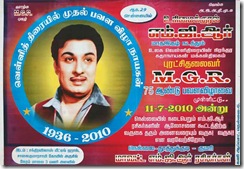 The entire city was adored with Colour poster which is uploaded in our blog for you.

Most of the MGR Fans can be seen in this image. The images and news are forwarded by B.S.Raju, Editor Urimaikural.

Updated post link given below
MGR Devotee Sailesh Basu has forwarded the below article to me. 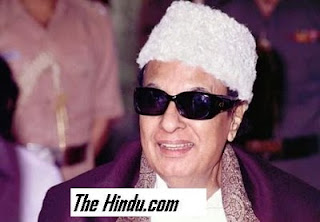 The article is from thehindu.com

The district that had produced some of the greatest artists and musicians of the country is honouring its yet another great son, the well known silver screen icon 'Makkal Thilakam’ and the late Chief Minister of Tamil Nadu M.G. Ramachandran by constructing a memorial for him in his ancestral village of Vadavannur in Chittur taluk, 15 km from Palakkad.
The memorial – a Community Hall – constructed by the Vadavannur Grama Panchayat will be inaugurated by Union Minister of State for Home Mullappally Ramachandran on Monday.
The ancestral house of MGR ’s mother Sathyabhama is nearby and a distant relative of him is living there now.
Though MGR was born in Sri Lanka, his father Maruthur Gopala Menon belonging to the nearby Nalleppilly village returned to Vadavannur after his retirement as the Magistrate of Kandy in Sri Lanka and stayed for some time in their ancestral house.
After his death MGR ’s mother left with her another son M.G. Chakrapani to live with her elder brother at Kumbakonam in Thanjavur district.
While living there both the brothers entered the film world.
M.G.R had married from Kuzhalmannam in Palakkad. His first wife was Ammukutty alias Sadanandavathy, daughter of Kadukunni Nair and Mokambika Amma.
After her death only MGR married actress Janaki. In fact some of the relatives of Janaki had married from Vadavannur.
Though the family left Vadavannur MGR had visited his ancestral house on a number of times even after becoming Chief Minister of Tamil Nadu, the local people said.
The Grama Panchayat President of Vadavannur K.S. Sheeja said that the Panchayat has constructed the memorial which will be used has a conference hall and Kalyana Mandapam. An amount of Rs.52 lakh was spent from the M.L.A’s local area development fund of K. Achuthan.
The Kalyana Mandapam will be rented to poor families on a lower rate as MGR had helped many poor families in conducting marriages.
It is in the memory of that great noble heart, the memorial hall will be leased out for marriages also, the president said.
Click here for the punch dialogs in Pallandu Vazhga movie. 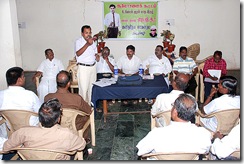 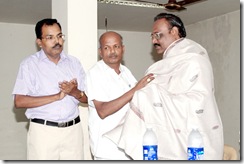 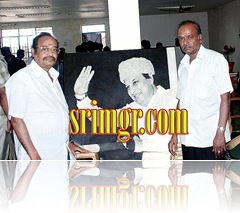 A beautiful laminated Makkal Thilagam photo presented to the FANS. Seen in the above image are the Office bearers of Coimbatore Makkal Thilagam MGR Manithaneya Maa Mandram Kannaiyan and Annamalai Rangaraj.
The Rare photo of Makkal Thilagam MGR was taken during when MGR visited Coimbatore by R.P.S.Palanisamy. The big size photo was displayed in the Meeting hall. All MGR Fans were captivated by the enchanting smile of Puratchi Thalaivar MGR, and every individual took photos standing near the big size MGR image (seen above). The photo was well preserved even today. We have to thank Mr.R.P.S.Palanisamy for his tiring work.
During the function educational fund was provided to MGR Fan Parameswaran’s children.
Some of the MGR Fans and Devotees who participated in the Meet are:
Kathirvel, Dass, A.S.Kannan, Siva, Mohandass, V.Krishnamurthy, M.S.Sekar, Irugur S.Raju, Rathinapuri V.Krishnamurthy,  from Coimbatore, Vellore Ramamurthy, V.Senthilkumar, Thirumuruganpondi Meenakshisundaram, M.Karthikeyan, Periyar Colony S.Semalayappan, Tirupur Anbuselvan, Avinashi Balu, Rajadasan, Theni, S.Ravi, Bangalore, Malaravan, Dindigul, Karuppusamy & Ramakrishnan, Deenathayalan Palani, Madurai Tamilnesan, Kumaran, Lavanya Venkatesh, Madurai,  Kannaiyan, Rangaraj Coimbatore, Samuvel, Bhaskar Sathyamangalam Murugan, Gobichettipalayam Annamalai, Periyayeepalayam, & all others from above districts participated in the meeting.
After the end of the meeting lunch was arranged to all the MGR fans.  Finally, Mr.Semalayappan thanked all the members who attended the meeting. All the arrangements were made by S.Ravichandran & Semalayappan. 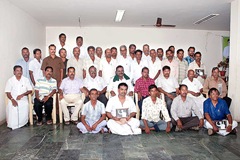 Due unavoidable circumstances MGCB Pradeep was unable to attend the meeting. He conveyed wishes for the success of the MGR Fans meet in Tirupur.
Tirupur Ravichandran forwarded these images and matter through mail, we have to thank him because by his help (nearly 95%) the post was completed today.
For Bangalore Fans Meet Click here…

Chennai MGR Fans 2nd Round meet for the Platinum Jubilee celebration was held in MGR Square on 27.6.2010, 11 am, Sunday. 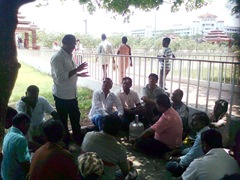 The meeting concluded by 2.40 pm the group photo was taken by Elangovan and it will published after I get hold that copy. 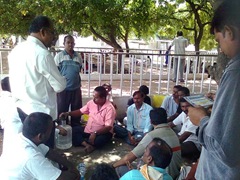 The persons who participated in the meeting are: