A special post by MGR Fan S.Vinod from Bangalore.

ALL THE ABOVE SAID ACTORS WAS FAMOUS IN THEIR RESPECTIVE LANGUAGES.
NO DOUBT THESE ACTORS CREATED DIFFERENT ROLES AND GAVE SUCCESS MOVIES TO THE FANS.

BUT ALL THE HINDI STARS NO WHERE CONNECTED WITH THE COMMON MAN PROBLEMS. THEY EARNED MONEY NOT THE HEART OF POOR.

INFACT ABOVE SAID ACTORS EXCEPT MGR AND SIVAJI NO ONE HAVING MASS AND GRADUALLY THEY WERE DISAPPEARED FROM THE POPULARITY.

OUR MGR IN ALL THE FILMS STILL REMEMBERED BY THE OLD AND NEW GENERATION AND CREATED SEVERAL RECORDS BECAUSE MGR IS NOT AN ACTOR ABOVE ALL THE GREAT MAN OF THE NOBLE. MAN OF DIGNITY. MAN OF KIND HEART. DONOR OF MILLIONS OF HIS EARNED MONEY TO THE POOR PEOPLE.

VERY INTERESTING OF THE NEW MGR FANS WHO WAS BORN AFTER MGR"S DEATH. MOST OF THE MGR FANS NOT EVEN SEEN HIM AT ALL.

NO OTHER ACTOR IN THE WORLD HAVING THIS KIND OF CHARACTER.
WE ARE PROUD TO BE A MGR FAN.

WITHOUT MGR SONGS - NO CHANNELS

WITHOUT MGR CINEMA - NO CHANNELS

WITHOUT MGR NO POLITICS IN TAMILNADU.

Every MGR Fan has a individual story with MGR. My client Mr.Bose, who retired as Superintendent from Chennai Port Trust has his own experience with MGR. 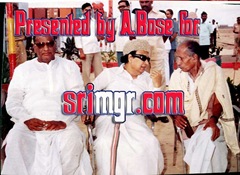 Two times he had the opportunity, first time he saw MGR was in Broadway Chennai, MGR was collecting funds from the people  for rebuilding houses which were gutted due to fire.

Mr.Bose was having only 1 rupee in his pocket he took it and handed over to MGR, with smile MGR was touching only the coin but not Bose’s hand. So he grabbed MGR’s hand for a moment, MGR eyes gestured him  to leave his hand. He was in heaven after seeing MGR. He was carried away by the colour and charisma of MGR. 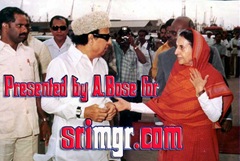 The second time when Mr.Bose saw MGR was in 1983 during the inaugural ceremony of Container berth in Madras Port Trust during the reign of Prime Minister Indira Gandhi.

MGR came first to the function followed by the Prime Minister of India, Indira Gandhi. Mr.Bose was near the Ministers of Tamil Nadu Nedunchezhian (not in the photo). 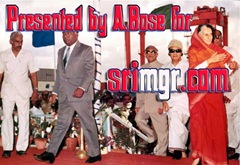 From the images we can name some of the persons along with MGR, Khurana Governor of Tamil Nadu, R.Venkatraman (President of India) he was Cabinet  Minister in Indira Gandhi rule. 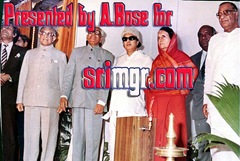 Mr.Bose had preserved these photos all these years. We have to thank Mr.Bose when I asked him to hand over the photos to me to share with MGR Fans in our Blog without any hesitation he handed over the photos.

This news was forwarded by MGR Fan Murugan Dharmalingam, published in Times of India, Chennai Edition.

In Chittoor district, it is MGR and Jaya all the way

Nagari/Hyderabad: Move over Chiranjeevi, Balakrishna, Pavan Kalyan and for that matter, the latest hot-shot political heartthrob Junior NTR who, any way, is recuperating in a hospital. For, Nagari, Satyavedu and Chittoor voters still vouch for Kollywood, more so for M G Ramachandran and fiery Jayalalithaa.

Playing to the gallery are political parties which are dishing out popular numbers of MGR-Jaya and showing their films at election meetings and roadshows. A Vijayendiran, a farm worker from Nagari, sums up the mood. “I have grown up watching ‘Makkal Tilakam’ MGR’s films and listening to his songs. MGR was an inspiration to all the political parties then and it holds good even today,” he says.

Trade analysts say it’s no surprise that MGR-Jaya ’s films wow the electorate in the tailend Chittoor district, which has a close connection with Tamil Nadu and its culture. “The first man to conspicuously blend cinema and politics was MGR. He opened a new world for people caught in frustrating drudgery of impoverished lives,” a senior film critic told The Times Of India. Little wonder that all the parties, irrespective of political affiliations, are running the movies of MGR-Jaya — the lead pair of yesteryear in Kollywood — in the three key assembly segments which have a sizable Tamil population (over 60%).

“Some of the voters even ask us to play very old songs and movies of MGR which are not available,” a TDP leader from Satyavedu said. Presently, parties are playing MGR-Jaya starrers like ‘Ayirathil Oruvan,’ “Chandrodayam”, “Naadodi Mannan”, “Engaveettu Pillai,” etc. Superstar Rajnikant and Vijayakanth’s movies are also much in demand during this election season, a source said.

Analysts said the demand for MGR’s films was much to do with his ability to break caste hierarchy, vault over literacy barrier and be with the common man in his cinema as well as political career. “Substance and issues can be easily replaced by cine glamour. But stars like MGR and NTR had chosen to trade their mass appeal for the good of society,” an analyst averred.

Email ThisBlogThis!Share to TwitterShare to FacebookShare to Pinterest
Labels: 300

The book has 35 pictures 2 colour images, includes records and information's. I have selected some 9 images most of them off the camera some of the images are  not in the movie.

Most of MGR Fans had the opportunity to see the above image, this image was taken during the first scene, click to see the whole image who was with MGR. 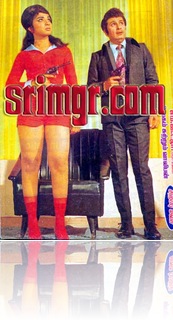 MGR and Latha looks up to see R.S.Manohar this shot was not included in the final cut. 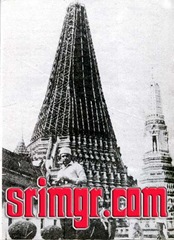 This image is from a location in Thailand. 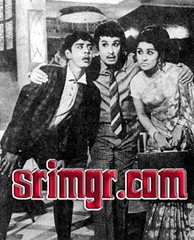 This shot was deleted from the movie Ulagam Sutrum Vaaliban due to the length. Look at MGR’s pant it is loosely fit. In the whole movie MGR’s pants are tight fit. What could be the scene? looking at the face of Nagesh and Chandrakala it looks like comedy scene. 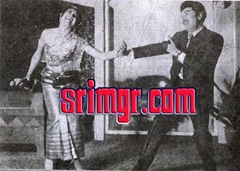 This is for the photo shoot for the scene in Dusithani Hotel. 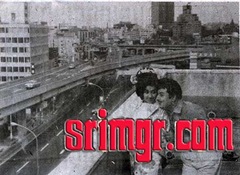 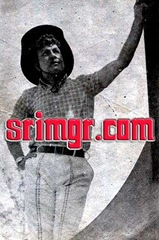 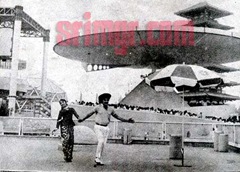 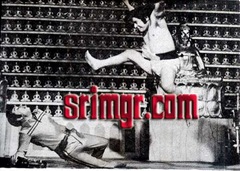 Taken during the fight scene these are from still cameras.

I thank  MGR Fan Venkatesan who forwarded the book to share in our Blog.

Oriental Pictures Ninaithathai Mudipavan was re-released by AVM Productions in Natraj this week. As this is election time in India MGR Fans were talking about the coalition between the parties. 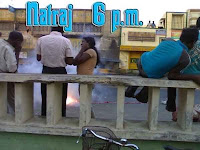 The theater was almost full, 3 main MGR images were garlanded followed by firing crackers in the street. 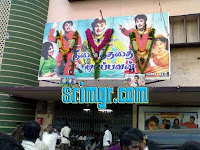 Balcony ticket was only available after 6.15 pm. 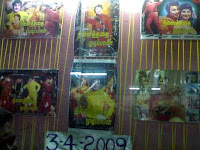 The songs in this film was nicely tuned, MGR fans asked once more for கண்ணை நம்பாதே and ஒருவர் மீது. First song repeated for three times and second one for two times.
Posted by Roop No comments:

A day with Chief Minister MGR

Second part continues as MGR reaches Mambalam Office there he takes care of an old lady problem (That day MGR becomes their family God). Then he meets Actor Vijayakumar who came to invite MGR for the house warming party. MGR's personal secretary Lakshmi Narayanan hands out the important notes for the problem involving University Professors. When MGR assumed office in June 1977, the opposition party indirectly started various movements against MGR Government nearly 117 strikes in just 6 months, but the strike and other activities did not succeeded for what it was started, in my future post I will give you the speech made by MGR about this strikes done by various Government associations with backing of DMK.

By 10 am MGR gets ready to reach St.George Fort to do his duty as the 9th Chief Minister of Tamil Nadu. There he meets the representatives of University Professors Union and after the meeting he gives interview to press association. This page is very important how MGR looks into the matter, how well he answers and how he feels about the people of Tamil Nadu.

I have only the two parts of 3 part series of A Day with Chief Minister MGR. If any body by chance had other pages please forward to blog.