Madurai is historically a famous city and to MGR Madurai people are the first to introduce MGR Fans club in the year 1950, which later spread to all of India and the World.

MGR was very sentimental about Madurai. His first 25 weeks film was Madurai Veeran and his last acted movie was Madurai Meeta Sundarapandian. Many of the titles also came from Madurai some are KALIYUGA PARI and KALAI SUDAR. MGR contested from Madurai West constituency in 1980 and won by substantial vote difference. Madurai was said to be MGR's Fort as far as the film and political life are concerned. 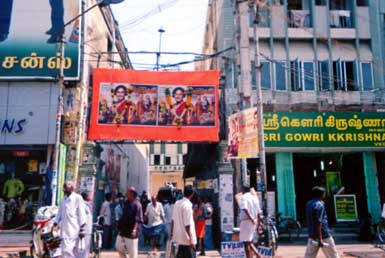 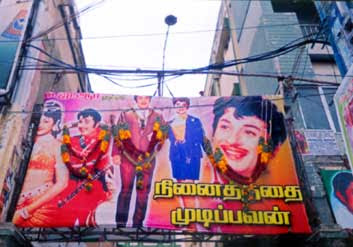 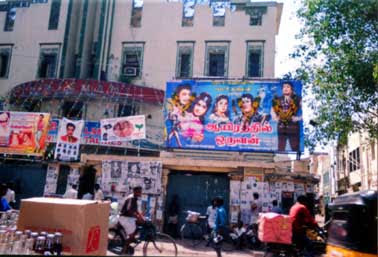 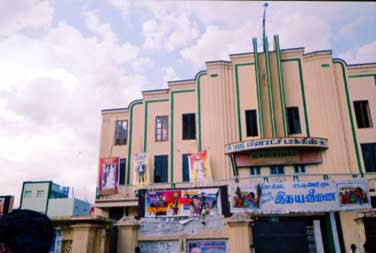 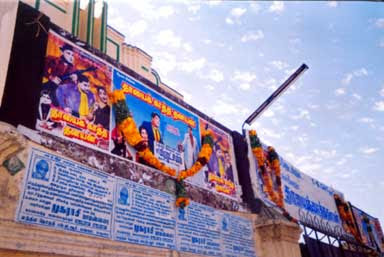 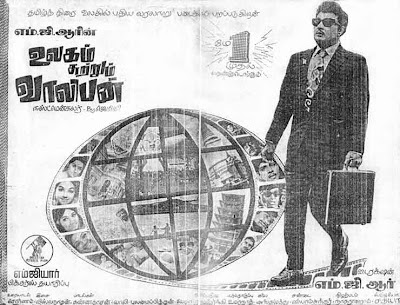 These paper cuttings are provided by Ponmanachemmal Sri MGR Bakthargal Trust, Chennai. (From Old paper pardon for the poor quality)

Ulagam Sutrum Valiban was slated to be released in May 1st 1973, the above advertisement shows the fact. The ad has the names not only MGR alone he has given the credit of others also
Dialogue writer Sornam
Music Viswanathan
Lyrics by Kannadasan, Vali and Pulamaipithan,
Camera work by Ramamurthy,
Sets by Angamuthu,
Stunt by Shyam Sundar,
Photos by Nagaraj Rao,
Studio - Sathya Studio,
Editing by Umanath.
Direction MGR

Note there is no mention of Theatres. 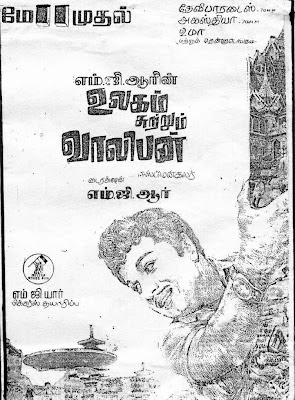 The Second Ad shows the release date as 11th May 1973 and the theatres for Chennai city Devi Paradise, Agasthiya and Uma.

When you zoom the picture you can the see the various locations of the movie in the rail MGR holds.

I did two Nokia themes using ownskin.com a web site allowing us to create themes for free we just have to give the email id and register. Try and make some good themes.

feel free to use the theme and if you do some themes give the web address in my comment section. Thanks.

MGR One in One Thousand

Padmini Pictures Ayirathil Oruvan was released in 1965. Jayalalitha as MGR's heroine. Due to the huge response by the crowd this pair continued to act together for nearly 27 films. 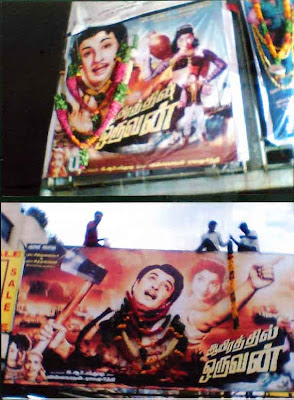 Ayirathil Oruvan was a 100 days film depicting the life of Slaves and atrocities of the Dictator. And how MGR acted as a Doctor liberates his motherland. 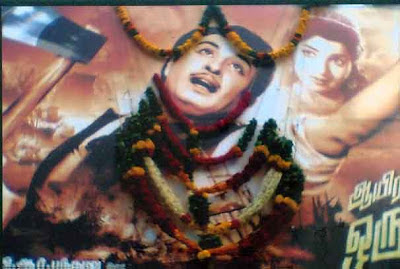 This movie was released again two months back in Chennai City. Though the print was not good the cinema halls were crowded.

Pictures below represents the participation of MGR Fans in several Theatres in Chennai city. 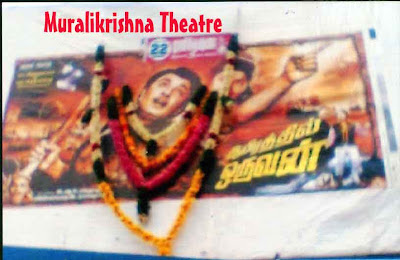 The film distributors had erected captivating cut outs and digital banners and spent lavishly in film advertisement, daily big sized ad was placed in Daily Thanthi which I had uploaded in my previous blog. 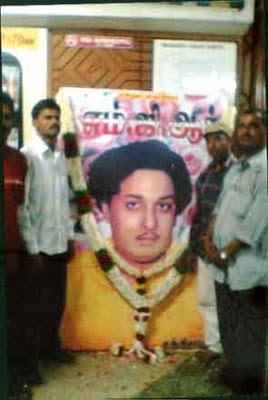 Images represents the participation of MGR fans in several theatres in Chennai City. Captivating cut outs and Banners are kept by the film distributors.
Not only MGR fans kept various Banners and garlanded them, Actor Sathayaraj has kept a banner to MGR in Kamala Theatre. 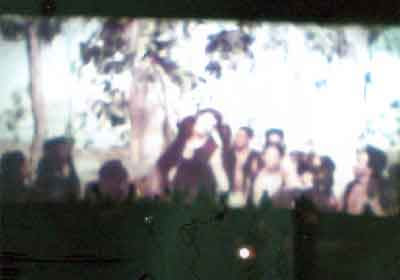 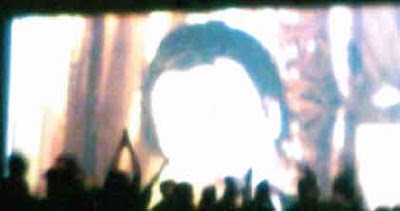 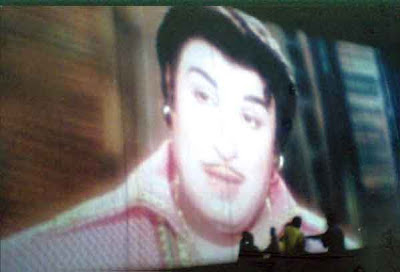 Fans rushing to the screen to touch MGR image.

Two Devotees and a Fan

I contacted a MGR devotee Yukesh Babu and asked him to pass some details of MGR to me. And he obliged to send it through internet. I asked to hand over the details to me personally so that I can see him. Yesterday he came sharply by 4.30 pm. accompanied with him another MGR devotee M.Sathyamoorthy alias Sathya. Yukesh as well as Sathya belonged to "PONMANACHEMMAL SRI MGR BAKTHARKAL KUZHU" this network has reached up to Madurai which is headed by S.Kumar. Who updates them with info of collection in Box office done by MGR movies. 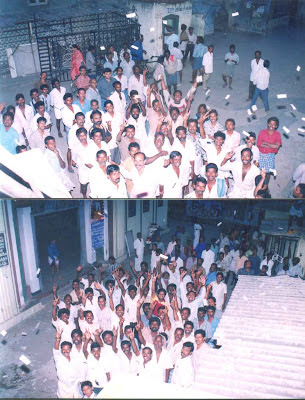 Yukesh Babu is of my age, and he had a Ring engraved the three letters Tamil people wont forget "MGR". Sathya was very young he was not even 26 years old who is residing in Narayana Maistry Street, Otteri, Chennai. To me Sathya was more than a Devotee, he adheres to MGR's principle, he did not even drink Coffee or Tea because they have caffine - which MGR has said not to drink to his fans. (MGR drinks only Milk) He only watches MGR movies in theatres not another film. He was a very strict MGR Devotee. I felt proud of him. They are eager to make a Web site for MGR. 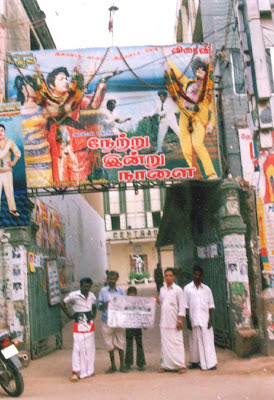 They also told me that they are against of using MGR film name nowadays and the using MGR as a comedien in some shows which are telecasted in Sun and Vijay TV. I asked them what is wrong of using MGR film name, already some films Nadodi Mannan, Ragasiya Police have released but they failed in the Box Office. Now there is a news of using MGR film name Nam Nadu by Sarathkumar who is also a MGR fan. But they said, we are not against title Nam Nadu we did not like the name Ayirathil Oruvan used again. Because it is a synonym of MGR. I felt right, is there any suggestion MGR Fans? what do you feel? 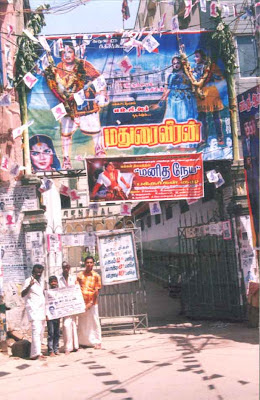 Yukesh Babu said one thing which gave a tinge of melancholy in the spirited conversation is the death of MGR, he said if MGR death took place now I might not live, I cant think the death of Thalaivar. I also told them whenever I watch in a Cinema Hall the first scene of MGR my eyes becomes watery and ecstatic, I feel relived after seeing MGR. 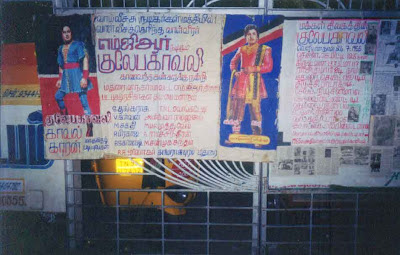 After 15 minutes of preamble they started to reveal the tip of the Ice Berg giving out the details of MGR related stuff. Which is exhaustive to me. After they left my Office I thought about myself, really I am capable of doing this work. How did they believe I am the right person of doing this task. I don’t know. But I will try do my best, and the spirit of MGR will guide me. 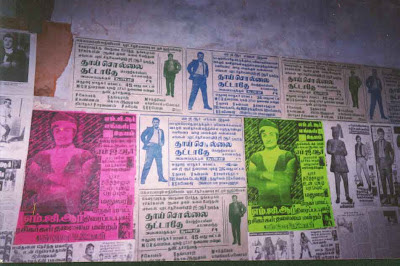 This was shot in a Mobile cam uploaded by sarav20 in www.youtube.com.

This is a clip from the film Sivaji acted by Superstar Rajnikanth, hear the fans joy when they see their Hero Rajnikanth in the costume used by MGR in Rickshawkaran. Rajni fans turns ecstatic on seeing Rajni as MGR. What this means?

They are seeing MGR in him because they are once fan of MGR.

Thanks for Sarav for his consent on adding this clip in my Blog.
Posted by Roop 1 comment:

To be or not to be God Part II 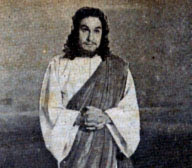 After getting a Second Hand Camera Mobile I stopped to take some pictures of the Cycle shop that I have mentioned in the earlier blog titled "To be or not to be God".

Please click the link below to read the entire article. And why MGR turned down the offer. 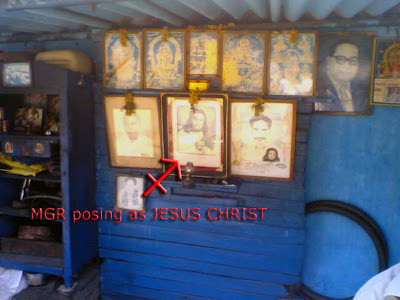 I took some pictures of the shop with the Nokia 6670 mobile. MGR posing as Jesus Christ and a lamp lighted to honour him as their God. Near MGR is the Owner of the shop and on the another side Anna Durai (The founder of D.M.K. Party) The shop is founded by Late Kali and now the shop is looked after by his son… his name you wont believe Karunanidhi. 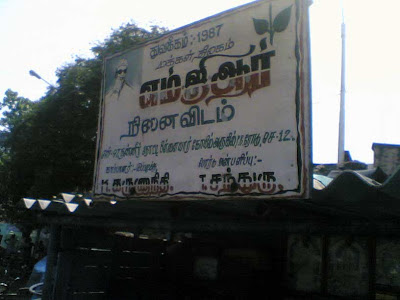 As I am late to Office I planned to meet the Owner and have some conversations and want to know about his likings on MGR, which I want to post it in my blog as soon as possible.
Posted by Roop No comments: 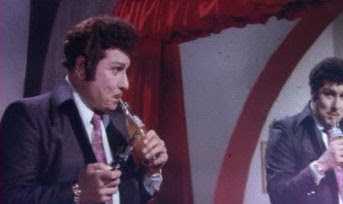 The footage used by MGR in foreign locations came to 80,000 feet. Out of these 10,000 feet were used for back ground scenes. MGR further deleted some 20,000 feet of the footage. But the duration of the film was over 4 ½ hours. He asked Sankar Director as well as Good Editor to trim the movie. After Sankar's work the Foreign footage came to 40,000 feet. that is what we see today in the Ulagam Sutrum Valiban. 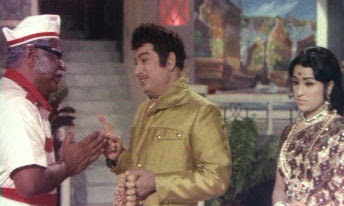 And what happened to deleted footage? And what the story will be? And were is the remaining negative. Many film that are released DVD nowadays have included deleted scenes. Some movies are again released as Special Edition have not before seen footages, Alternate ending and deleted scenes. Can MGR fans have a chance to peek the remaining portion? God Only Knows. 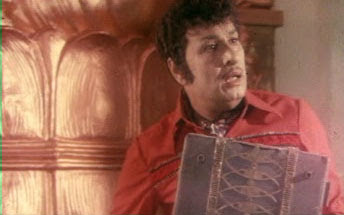 MGR has habit of spending lavishly for his own productions. Not to say Ulagam Sutrum Valiban his own production! He spent nearly 4 lakhs for the Water ballad for shooting (only shooting the real water ballad and not the matching shots that he took in Satya Studios with a large Glass Tank) 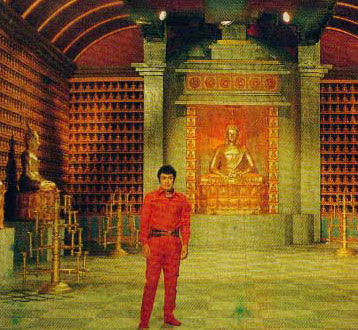 On completion of this movie MGR's home and all his properties were under Mortgage. The success gave the difference. The Budget got high because the negative were sabotaged and to make it up he has to recreate most of the scenes that are shot in Singapore, including the Tiger Balm Gardens, Beach Outdoor etc.