On the Centenary of our beloved Leader Puratchi Thalaivar MGR, and in memory, last November 2017, the Tamil Nadu Chief minister Edappadi K.Palanisami released a new rice variety 'MGR 100' developed by TNAU short form for Tamil Nadu Agriculture University. The new rice variety which belongs to the nomenclature of CO 52, would give high yield, superior grain quality and it is highly pest and disease resistance. 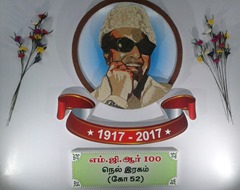 Further the news states that this new variety was on the sequel of TNAU's first hybrid rice, MGR (COR H1) released in 1994. This new rice variety would be a good alternate for BPT 5204. Over a period of six years, trials were conducted and cultivated in 158 locations in over twenty one districts. The harvest crossed 7000 KG/Hectare.

This variety rice would mature in 130 to 135 days. The MGR 100 has medium tall in stature with long droopy panicles. The MGR 100 variety was recommended for large-scale demonstration based on its high yield, by the university. As the university awaits the gazetting of the variety by the Central seed subcommittee for variety release and notification.

Have you heard about MGR Music Card? While going through HD audio I happened to see MGR songs recorded in HD quality. 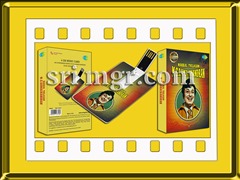 The songs from our beloved Leader MGR movies have been converted to HD and been sold by Saregama India Limited. Credit card shaped reusable USB memory stick preloaded with 200 MGR songs in HD quality. Most of the songs are philosophical and duet songs. The price is Rs.600/-

The following websites are selling MGR music card you can find the song list given in pdf format.

Today is the 101st birthday of  God of the Poor, Puratchi Thalaivar, Philanthropist and our beloved MGR. As usual all the TV Channels and some of the theatres are showing MGR movies. Let me come to the topic of this post, MGR’s new Avatar: 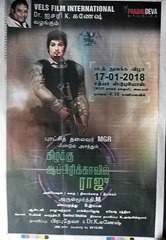 Most MGR fans know that in 1999 the Hindu gave an article of Pentafour a software company planned to develop a Computer generated MGR and Raj Kapoor lead movie. They went into an extent of MGR’s dental characteristics. But the project was shelved and there is no news about the movie. 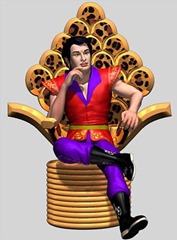 Ten years later a promising animated clip of MGR was published in a website, a trailer of new MGR animated movie “Puratchi Thalaivan”.

The website carried the caption “MGR’s first 3D animated Film” The video clip started with the title given to other actors such as Super Star, Supreme Star, Mega Star, Ultimate Star, Little Super Star, Winning Star, Victory Star – The Star of all Stars our MGR. The clipping continued, a red screen on it Tamil words வாழ்ந்தவர் கோடி மறைந்தவர் கோடி மக்கள் மனதில் நிற்பவர் யார்? the screen opens up and MGR emerges, does some Nadodi Mannan style, followed by ship is sailing and MGR shooting an arrow. That ended the clip sadly the animated movie too.

They have shared the invitation and today newspaper carried the advertisement of the movie showing our beloved MGR attired in Police Body armour vest carrying an assault weapon. Further the news about the movie is that they had planned to release it on 17.1.2019 coinciding with MGR’s 102nd birthday.

Next year if all goes well we will be having a double treat of watching the animated movie “Kizhaku Africavil Raju” and Ramana Communications “MGR”.

Below are some of ads published in Daily Thanthi Tamil Newspaper.

MGR – a film on Makkal Thilagam. 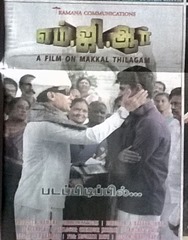 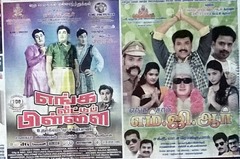 In social media many have reminisced about their involvement with our beloved Leader Puratchi Thalaivar MGR. One such person is S.S.Ramakrishnan from Madurai, he is freelance photographer. He had published a book with numerous photos of MGR pertaining to the political rally, speeches etc.

Recently he had shared one photo of MGR speaking to the gathering the picture was taken at early morning 3 AM! 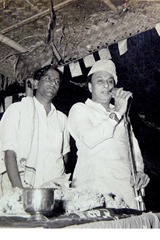 (MGR giving his memorable speech, seen along with him his the first victory candidate and first Member of Parliament (MP) of ADMK, Mayadevar)

Even Poet Kannadasan who was in the opposite group had praised MGR’s determination and his tireless  hard work in Dindukal election. The result we all know that ADMK secured more than 55% of votes.

Below is the unforgettable event as narrated by S.S.Ramakrishnan in Facebook.

Former Chief Minister M.G. Ramachandran epitomized the qualities of an ideal ruler and future generations will be inspired by his personality as he strode the political stage of Tamil Nadu like a colossus, observed Governor Banwarilal Purohit here on Tuesday. 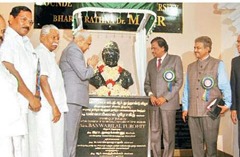 Speaking at the unveiling of a bronze bust of MGR at the Tamil University, Mr. Purohit remarked that MGR was one person whose actions spoke for his thoughts and intentions. It was because of his noble actions that he had found a permanent place in the hearts of the poor and the downtrodden, he said.

Stating that MGR had initiated and implemented several novel programmes during his tenure as Chief Minister, the Governor pointed out that the nutritious meal scheme was one such that showed the way for the whole of India. The nutritious meal scheme reduced school dropout rate significantly besides helping overcome caste discriminations. It also helped those in the lowest strata of the society to get employment in the noon meal centres as cooks, ayahs and assistants.

MGR’s generosity was best highlighted in the contributions he made first in establishing the Tamil University here, setting apart 1,000 acres for the campus and sanctioning generous amount of funds for the construction of buildings especially the library.

The late Chief Minister was genuinely interested in the welfare and uplift of farmers, women and the downtrodden, the Governor recalled. His schemes for the welfare of the farmers ensured maximum growth for Tamil Nadu in the farm sector, he added.

Mr.Purohit also released a book containing 56 articles written by the Tamil University faculty members on MGR’s love towards Tamil and his contributions to the development of the language and the society. The bust and the book have been readied by the varsity as part of MGR’s birth centenary celebrations.