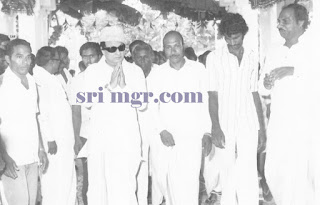 Our Puratchi Thalaivar MGR's bodyguard and one of the stunt actor in MGR movies have given a detailed speech about the formation of Stunt union and the person behind. In the video embedded below, K.P.Ramakrishnan narrates how MGR helped the stunt actors when they met with accident. And also he mentions MGR's benevolence extended to Hindi stunt actors.

The video was forwarded K.P.Ramakrishnan's son Govindaraj to share in our MGR blog. 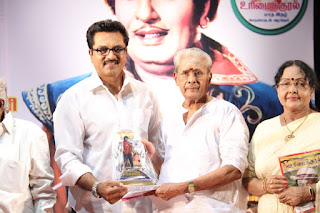 The above was said by R.K.Shanmugam during the Silver Jubilee function for Ayirathil Oruvan held in Kamaraj Arangam on September 1st 2014. 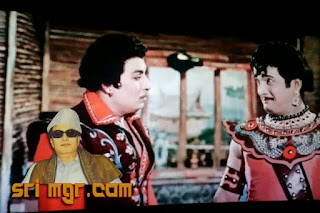 The legendary and everlasting verses written by R.K.Shanmugam in movies such as Ayirathil Oruvan, Rickshawkaran, Pallandu Vazhga, Neethiku Thalaivanangu etc. breathed his last yesterday. We srimgr.com team wishes his soul to rest in peace and express our deepest sympathies to his family.

I was blessed to have meet him and spoke to him for half an hour during the Ayirathil Oruvan function. I was waiting outside for my friends as R.K.Shanmugam came by. The function has started and there was no one to welcome him. I and another MGR fan (not introduced to him) took him arm by arm as R.K.Shanmugam was not well to walk alone. We both accompanied him to the hall, he asked us to give some time to regain his breath. Then he spoke to me about his relationship with MGR and MGR always call him as "Asiriyar" and not by name. Our beloved Leader Puratchi Thalaivar gave utmost respect to learned people. 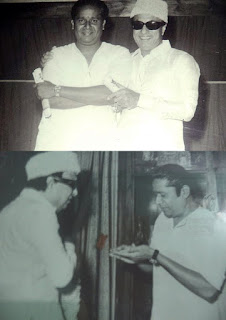 He talked about MGR's and Jayalalitha's help to him, as he was mentioning his eyes welled up, so much emotional he became on remembering MGR. I accompanied him to the front row reserved to VIP's. On that day I believed MGR's spirit gave me that golden opportunity to converse with him and hold him to the stage.

Below the War of words the best one liners from Ayirathil Oruvan. Uploaded by Jai Sankar in you tube.


One of my client Mr.Bose who was a Burma repatriate and who worked and retired as Superintendent in Madras Port Trust had given me some images relating to the inaugural ceremony of new container berth at the cost of 40 Crores (in 1983) attended by the then Prime Minister Indira Gandhi and our beloved Leader Puratchi Thalaivar MGR. 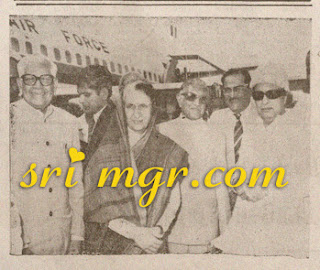 (Chief Minister of Tamil Nadu, MGR welcoming the Prime Minister of India Indira Gandhi on her visit to Madras on 18.12.1983)

The function was held on 18th December 1983. Recently while going through my scan collection I happened to see the above news. I have already published the colour images of the function 8 years before, the link is given separately. 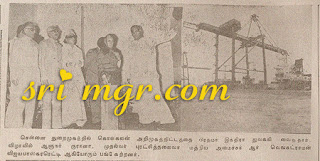 In the function Prime Minister inaugurated the new container berth and Chief Minister MGR launched new Fishing Harbour on the north side of the port. As per protocol MGR spoke before Indira Gandhi, below is the speech given by MGR in the function.