Total films released up to 1978 is 136, Hero acted movies are 117. In this 117, one movie is Telugu movie Sarvathikari and one Malayalam movie Jenovah. Both these movies are released in Tamil version also. The Tamil movies only taken into account that is 115. His success rate follows: 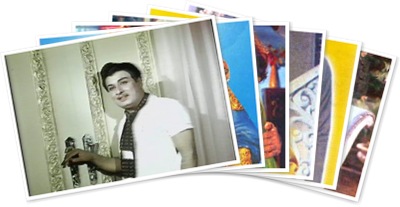 Info: Number days for this movie is 56.

1965 movie of the year Enga Veetu Pillai was re-released in 3 theatres in Tamilnadu. 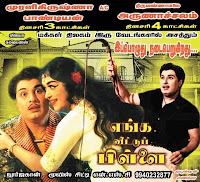 More than 750 people came to watch the first show in Pandian theater on 20.2.2009. The ad for the movie was placed in News papers only on 22.2.2009.
Today's show in Pandian was Housefull and nearly house full in Muralikrishna. Friday news was forwarded by MGR Devotee Yukesh Babu, and the Sunday news by B.S.Raju (Pandian) and Sathya for Muralikrishna theater. The collection will follow soon. Enga Veetu Pillai movie was 44 years old and still drawing crowd.
Posted by Roop No comments:

Like Chennai, Madurai and Nellai, Trichy also holds lots of MGR movie records. His first silver jubilee movie as Hero “En Thangai” was released in 1952 in Jupiter, was second best after Murugan Theatre in Srilanka with 50 weeks run.

When MGR was the Chief Minister he wanted to change the capital of Tamil Nadu from Chennai to Trichy but the plan was dropped.

The Information is passed by MGR Devotee K.Krishnan from Trichy. Movies that are over 100 days are given below. 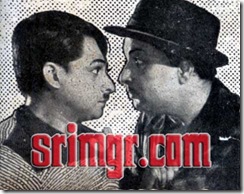 By 4 pm the fans got the print of Oli Vilakku and the print was carried by an Elephant. The print arrived at the theatre by 5.30 pm. amidst the enthusiasm of MGR Fans and public. It was celebration time. The function was started late and the movie was projected on the screen by 7.30 pm. Theatre capacity is around 1500 but the people count came to 4000. Remaining crowd was staying outside the theatre got a glimpse of MGR's smile and blessings.

The function was presided by Ma.So.Narayanan, Malliga Prabhakaran from Dharmapuri, Karupasamy from Palani, Kovai Duraisamy and others. We have to thank the owner Balakrishnan and MGR Devotee T.T.Selvan and others who tried and succeeded in this venture. Their name will be remembered with MGR.

The images and records will be posted in our blog soon.

Under Common news the second one is the post on Sathya theatre.

If you have the Dinamalar tamil font the post is below I have copy pasted.

Thanks to MGR Devotee Yukesh Babu who passed this Dinamalar update.
Posted by Roop No comments:

This image is the screen test for MGR for the movie “Rajakumari” his first Hero acted movie which was released in 1947.

A photo from the movie “Sri Murugan” the movie gave fame for MGR for his Siva Thandavam. After MGR became the Chief Minister he searched for the print. The original negative and positive were lost in a fire accident. What is left in the movie is the photos only. Look closely you can see the catwalk and focus light. MGR dances with Malathi. 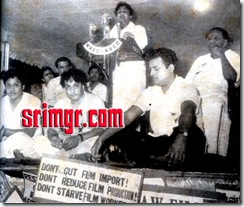 The Indian Government in end of 1950s increased the tax on import of raw film which all the members of Cinema Industry protested. This was the protest done under the Leadership of MGR by the South Indian Actors Association. In the foreground from left to right is S.S.Rajendran, MGR and Gemini Ganesan, background the speaker is Sivaji Ganesan.

In 1958 MGR when acting in a drama in Sirghazi met with an accident. This is very rare image, look how bulky MGR looks after the accident. To the right of MGR is B.R.S. MGR’s family doctor and to his left is Thirupathisamy. 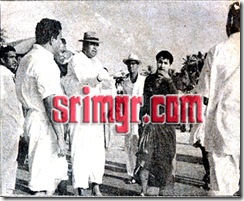 This is from outdoor shooting of Padagotti. Near to MGR is Director of the movie Prakash Rao. 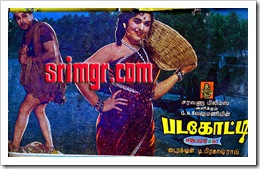 This image is from the song book of the movie. In those days the production company also comes out with the song book. This one is from Saravana films.

This is the disguise MGR used in the movie Padagotti. Resembles Periyar in this get up. 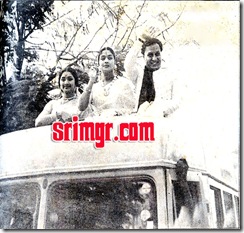 Enga Veetu Pillai was a mega hit movie of MGR. The victory function was celebrated in most of the theatres. This was taken during MGR, Saroja Devi and Rathna’s visit to Royal theatre. 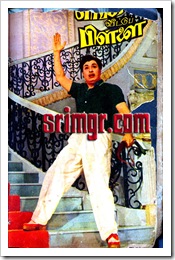 This is from the song book of Enga Veetu Pillai. We have most of the song books released by various Production houses but we don't have MGR Pictures Ulagam Sutrum Valiban. The song book was released in the shape of Earth. Those who have it please forward the image.

AVM’s Anbay Vaa was shot mostly in Simla and some scenes in Tamil Nadu Hill station. This photo is the shot for MGR to rescue T.R.Ramachandran from a wild horse. Look behind MGR lots of people watching the shooting. 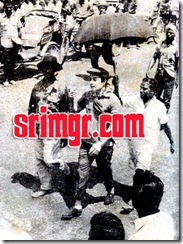 This is the outdoor scene for the movie Rickshawkaran. The rickshaw race was shot in and around Anna Nagar. It was hot and humid Madras and the crowd was uncontrollable. My father was in the crowd too (not in this photo). 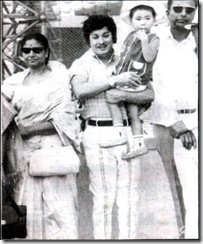 MGR with a Japanese child taken in Expo 70, Osaka. V.N.Janaki accompanied MGR with other actors for the movie Emgeeyar Pictures Ulagam Sutrum Valiban. 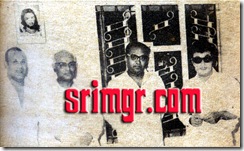 Asokan’s Amalraj pictures produced “Netru Indru Nallai”. This was during the pooja of the movie. Extreme right Asokan, P.Neelakandan the director, the person next to MGR is not known . Anybody knowing him please forward the name of the person. 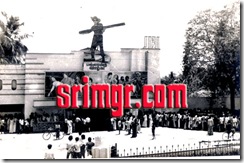 This photo was taken during the release of Pallandu Vazhga in Srilanka Raja Theatre. This photo is specially forwarded to MGR Fans by David from France. 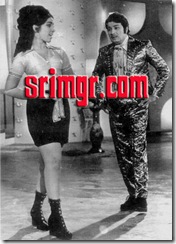 This photo is taken during the rehearsal of a song. 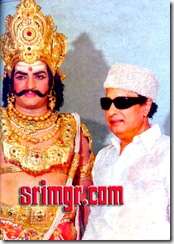 MGR and NTR, the two Chief Ministers from Tamil Nadu and Andhra Pradesh respectively. Taken during a Telugu film. Look closely both are sweating and MGR’s shirt is sticking to his body. Year of the photo unknown.

MGR being taken from the plane and rushed to Down State Medical centre in Brooklyn. Only person I can name was Palani G.Periyasamy. Who paid $10,000 to admit MGR in that hospital. 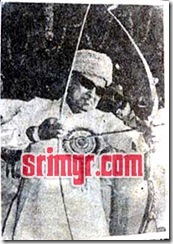 This photo is taken during a Government function. Where Chief Minister MGR stretches a bow. 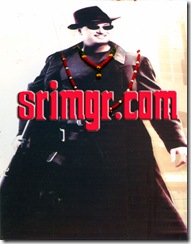 Last year this 50 feet banner was kept in centre of Chennai. MGR head joined over Keanu Reeves body from the movie matrix.

Mr.T.T.Selvan of Tutucorin sent the Invitation to Mr.B.S.Raju, Editor Urimai Kural MGR magazine to participate in the function to be held on 15th February 2009. And he forwarded this invitation for our Blog viewers. 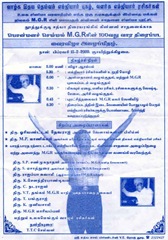 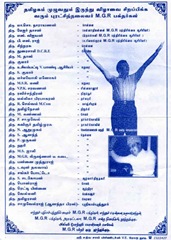 A Special Post by B.S.Raju for the 100th day of Re-release of Ulagam Sutrum Valiban.

Another Hot topic in Tamil Cinema. The title war between Vijay and Simbu. Recently Thamizhaga Arasiyal magazine, cover story is about the battle for the title for their movie name. Who will win the battle. 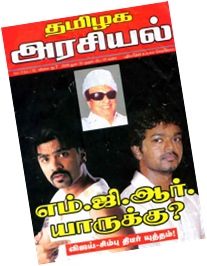 This is the Cover page of the magazine. And also the review of the new movie of Vijay “Villu”. 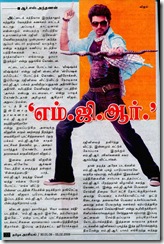 Written by R.S.Anthanan, the cover story starts with the styles and fame of Rajnikanth and then follows with the newer generation actors. 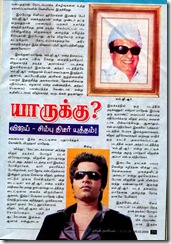 This page about the topic and the reason. 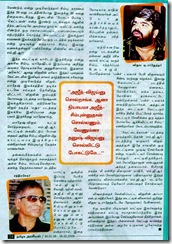 The magazine was forwarded by MGR Devotee Yukesh Babu. The magazine is scrumpled because nearly 50 people have read this copy on Sunday .

This week Sathya Movies Kavalkaran was re-released in Natraj theatre. The print was satisfactory for MGR Fans but not for MGR Devotees. 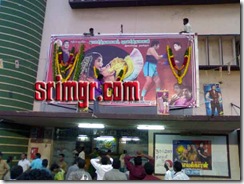 MGR acts a Police Officer, how he investigates the murder and mystery is the rest of the Story. 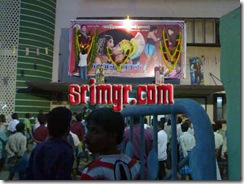 As usual M.N.Nambiyar is the Villain and lighter role is done by Nagesh, the character is Doctor. In one scene he will be the Doctor, patient and Nurse. 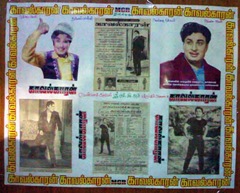 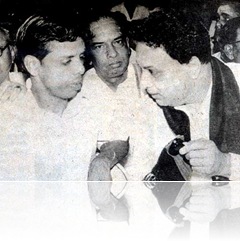 Yesterday the great Tamil Cinema Comedian and Character artist Nagesh passed away. MGR fans will never forget the appearances, the spoonerism character in Enga Veetu Pillai, Kleptomania which helps MGR in Ulagam Sutrum Valiban, modern tailor in Urimai Kural, Servant role in Anbay Vaa. His first film with MGR was Panathottam and the last movie was Meenava Nanban. Nagesh a wonderful person who entertained us for two generations – may his soul rest in peace.