Sri MGR Year 92, October 31st Saturday
Special Post by Dilkaran Ardent MGR Fan.
People’s Man who they fondly call Enga Veettu Pillai and Makkal Thilagam. For those who have followed his political path, he is revered as Puratchi Thalaivar, or Revolutionary Leader of the South Indian state of Thamil Nadu, or Tamil Country.
Maruthur Gopalamenon Ramachandran, or simply, known to even a toddler, as MGR, was born in Ceylon (as Sri Lanka was known at the time) on January 17, 1917.
Young Age
After the loss of his father at a very young age, the toddler and older brother returned back with their mother to Kerala. Poverty drove the little MGR and his brother, M G Chakrapani, to join a drama troupe as a very young age. He started his long acting career, first on stage, and later in cinema.
Acting Career
MGR started his cinema career, acting in supporting roles, until he was cast as a hero, in Rajakumari. Further to the success of Rajakumari, MGR only looked forward in his aspiration to become the No. 1 in films in Tamil Nadu. He maintained that spot till his exit from the movie industry in 1977, when he ascended the highest political position in the state, Chief Minister. MGR was the first Thamil actor to be bestowed with Padmashree
Political Career
During the early stages of MGR’s life, like millions of Indians, he followed the principles and guidance of Mohandas Karamchand Gandhi. MGR was a Congress supporter for a long time, until he was introduced by T.V.Narayanasamy to C.N. Annadurai. Anna as he was fondly called had felt that the state should be represented by a Dravidian group and formed the secular party, Dravida Munnetra Kazhagam or DMK. MGR joined the DMK and both the DMK and MGR popularized the party’s doctrine through the public medium of cinema. MGR always portrayed the do-gooder in almost all his films and did not waver from his conviction and policies. He continued to make movies and also ran for public office and was elected as a MLA, when he won the election by a landslide. DMK won the elections in 1967 and changed the course of Thamil Nadu forever.
MGR formed his own political party in 1972, further to a dispute with the leader, Karunanidhi, and won the State elections in 1977. He was re-elected twice more and remained Chief Minister of the State until his demise on December 24, 1987.
MGR introduced the Mid Day meal scheme for children, which was recognized by the UNICEF and the late Mother Theresa. During his lifetime as a celebrity, MGR donated a large portion of his personal income to various charities. He was the first celebrity to donate Rs. 75,000 to the Central Government during the Indo China war. The list goes on. To date, MGR is believed to have a vote bank, which is used at every State election by the Party he formed, the AIADMK. A memorial was built by the government of Thamil Nadu, where MGR was put to rest, beside his political leader and mentor, Anna, on the shores of the Marina Beach. MGR was awarded the highest civilian honour, Baratha Ratna, by the Government of India.
Click here to Vote for our MGR
Posted by Roop No comments:

Sri MGR Year 92, October 25th Sunday
I have certain number of MGR speeches, due to less time to spent before the PC I cannot upload all the speeches into Video format. Some one had done it already I give the link below.

This speech is given by MGR in Thiruchengodu, I have already given some mintue speech of this video in our blog previously. This link has full speech of MGR in

Sri MGR Year 92, October 20th Tuesday
Recently Fox History Channel telecasted Indian Cinema Documentary. On October 2nd the same documentary was re-telecasted. As I have watched earlier, this time I captured some important minutes of the Documentary regarding Tamil Cinema.
The program was one hour and South Indian Cinema was a part of the Documentary lasted for 6 minutes of it the major share was given to MGR alone regarding Tamil Movie taking up 3.20 minutes. The Documentary started with earlier Cinemas and how much the Tamil cinema is entwined with Dravidian Movement right from Periyar, Anna and then lastly our MGR. The documentary briefly tells how the only South Indian Actor who successfully became a Chief Minister of a State and held the position till his death.
The video in 2.14 starts with a projector light turning and casting luminance on MGR and Jayalalthia for the song "Atho antha paravai pola" from Ayirathil Oruvan. The words at the introduction of MGR was like this "However it was Marudhur Gopalamenon Ramachandran or MGR who created a personality cult unparallel in Indian Cinema Industry…"
Enjoy the video:

Deepavali is nearing and MGR movie Enga Veetu Pillai is to be released in Coimbatore in two theaters.

The news was forwarded to me by MGR Devotee Yukesh Babu, the image is taken from epaper of Maalaimalar, Coimbatore Edition.

And don't forget to vote for our MGR. Click the link below for voting.

Adimai Penn is released this week in Krishnaveni and Mahalakshmi as 3 shows.

And also "Kudi Iruntha Kovil" will be released soon. 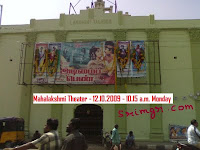 I was not able to witness the happening in Mahalakshmi Theater. Today I went in the morning and took this photo to upload in our Blog.

The evening show was houseful, extra tickets were given to accommodate more people. The traffic was halted for 15 minutes, more number of women were in the theater. This same movie was released nearby theaters 2 months ago but still people filled the theaters.
Posted by Roop No comments:

MGR Devotee Murugan Dharmalingam has sent this url for us to vote for our Thalaivar. Do your best. 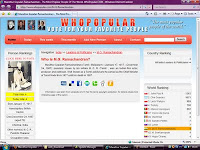 Before clicking the url please look at the images 1 and 2 that I have uploaded. 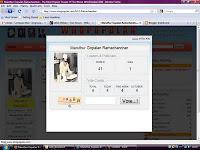 4)There will be a code you type as it is and then press the Vote...! Button.

5) Your vote will be counted.

The Web Site you have to vote for MGR is: