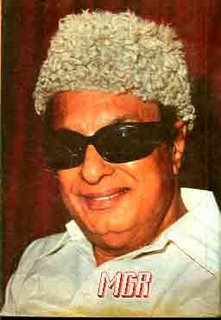 North East Monsoon has started, and heavy rain is lashing the City. I saw School children half drenched returning home. Government declared holiday to Schools lately. My thoughts went down memory lane, when I was in High School and when MGR was the then Chief Minister of Tamil Nadu.

I studied in Government School, whenever there was drizzle I tune to Radio to hear that Government declaring holiday. That happy moment happened always. MGR albeit had 3 years of formal education know the difficulties of School going Children.

In his tenure whenever rain lashes the City, I can expect a Newsreader spelling out these familiar line "Schools and College will be closed due to Rain ". Sometime the weather changes, but I enjoyed the period as a School boy.

People in my age group will ever cherish the experience. We as students never suffered any hindrances. Thanks to MGR an exemplar, the Legend with Human touch.
Posted by Roop No comments:

MGR is the Producer, Director and also Hero of the movie.

MGR as Hero (Dual action) portrayed the character of the King and the Wanderer, the style he introduced in Tamil Film to differentiate the two roles is still followed. (Example – the Nose twitching goes without saying it is meant for MGR) The King enacted with exquisite costumes, charming smile, and easy go attitude. On the other hand Wanderer holds his position by help of dialogues and swashbuckling fights.

The dialogues in the movie for example:

The dialogues are by Poet Kannadasan who later differed with MGR and when MGR became the Chief Minister, Kannadasan was given the most coveted post of Poet Laureate. 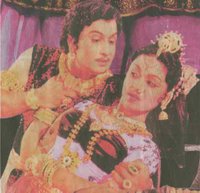 “Wanderer and King” is the first production for “MGR Pictures” which produced only 3 films so far and all the films were Super Hit. MGR was a very shrewd Producer, he precisely know how to create awesome sets for the Coronation ceremony and at the same time showing the half of the island in miniature. The sum he had spent for the sets, costumes and meal for the crew sets up for taking another film.

First MGR has no intention to be the Director of the movie, he approached the then great Directors, but all of them said MGR to direct as he knows lot about the technology of film making.

In one scene, the death of Heroine was shown as a montage shot, never before used in Tamil film to my knowledge.

His fans were excited from the first frame to the last, in Indian films, the appearance of the Hero in the first scene was given a great applause and MGR movie is no different, and the fact is when the second MGR appears in the screen the same applause continued as the MGR fans feel that there are two MGR’s. His simple gestures involving the real story or his Political side were very well understood by them. When Wanderer and Kings Aide parts before the climax, the wanderer gives a warm hug, the fans admire it, because they look not only the character of the king's aide, who is the real Brother of MGR (M.G.Sakrapani). When the Queen comes to know that Wanderer is not her husband and the Wanderer says "Do you trust me sister?" she tells the Wanderer, "Not only me, the whole country trusts you".

As usual the fans lighted camphor's and throwing bits of colour papers when MGR appeared in the silver screen.
Posted by Roop 2 comments: 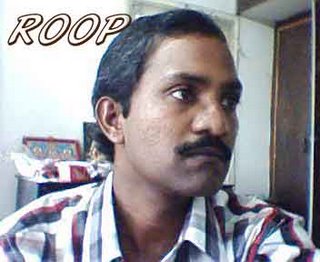