Phillumeny is the hobby of collecting matchboxes, matchbooks, match covers, and labels. In India we mostly use matchbox. In 1980s movies we can see matchbooks one such appears in Superman III the character Gus Gormon (Richard Pryor) after been rejected for paycheques that were given to unemployed people, to lit a cigarette he borrows a matchbook from a stranger (image given below)

Coming back to Phillumeny a person who collects such items is called Phillumenist. From Facebook Indian Phillumenists page, I got one matchbox cover showing, 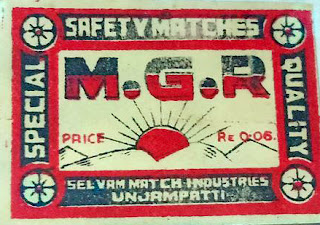 When browsing through the old collection I found out this scan from 1967. A request made by the then Puratchi Nadigar MGR to the electorate before the 1967 Tamil Nadu General Elections.

Published on 17th February 1967 in Samaneedhi, a couple of lines altered the fate and the end of  Congress rule in Tamil Nadu forever. 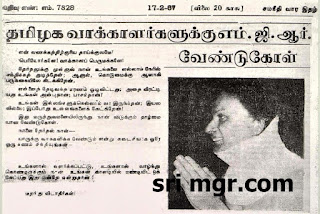