Finally after one month delay the 50th Year of Nadodi Mannan special edition book released yesterday. This is the real dedication by MGR Fan B.S.Raju. Nobody had the idea to release the book on the 50th year only B.S.Raj had done it to the love and respect for MGR.

The book contains rare pictures such as behind the scenes, Victory functions held in Madurai were MGR in the Chariot surrounded by 5 lakh people, cut outs in Paragon theatre, MGR entering the dais, getting awards, speaking to his fans, 14th day Ad, MGR in Nadodi Mannan make up, MGR with 5 ½ feet Silver Cup presented by the artist who participated in Nadodi Mannan movie (Now you can see this cup in MGR Memorial House, T.Nagar, Chennai)

The news such as the function held in Madurai Thamukam grounds. Base of Nadodi Mannan by MGR, M.G.Chakrapani view on initial and final stages of Nadodi Mannan, praising words of Politicians from his Mentor Annadurai, Ramakrishna Hegde to the President of India, professionals from various fields and artists from Nadodi Mannan, including Banumathy, Sarojadevi, M.N.Nambiyar, P.S.Veerappa, Ramsingh, Kannadasan, G.K.Ramu (Cameraman) S.M.Subbiah Naidu (Music Director) rare news from Vellithirai Magazine, (1958) MGR and press meet in 21.5.1958. The records from first release (1958) and the subsequent releases from 1988 to 2007.

A word about this book and why was it delayed. In the third week of July B.S.Raju told me that he had done the preliminary work for the 50th year of Nadodi Mannan and the book will be released on 22nd of August 2008. Before the book went into print, B.S.Raju's wife Vijayalakshmi was hospitalized. He tried his best but after 13 days she reached the lotus feet of God. On the final stage of the book all MGR Devotees and Fans came forward and stood behind him and gave the support. I have to thank Mr.K.P.Ramesh who called from Dubai consoled him and gave his best support for the release of this Book through his brother K.P.Suresh.

A book for 50 year Old film is remarkable feet. To my knowledge no book has been released for a 50 year old film and 50 year old movie Nadodi Mannan is still running successfully. We have to thank B.S.Raju for his Endeavour and successful finish of Nadodi Mannan special edition in midst of hurdles he faced, I feel that MGR spirit has helped B.S.Raju and that I also feel that MGR spirit will bless him.

Persons who like to buy this book can email B.S.Raju, email Id: bsrajavm@yahoo.com. The cost of the book is Indian Rupees 20/-

This is for my friends Siva, Murugan Dharamalingam and Tamilan, who contacted me in mail and mobile about the Loyola College "Karathu kanipu".

This is from "Dinakaran" Chennai edition.

This is from Dinamalar, Chennai Edition.

The most liked Tamil Actor is MGR with 21.3% and their most liked film is Nadodi Mannan. MGR has left the Cinema World 31 years back, and he left the World 21 years back but still people love MGR and gave him No.1 spot.
Posted by Roop No comments:

Prophecies of MGR Part I

This speech was given by MGR in Woodlands Hotel in 1972. The function was held to felicitate MGR for receiving the best Actor in 1971 (Bharath award) for the movie "Rickshawkaran". The function was organized by South Indian Film Chamber of Commerce and Film Journalist Association.

MGR spoke for nearly 1 hour and 30 minutes. Most of his speech is centered on Tamil Language, Tamil movie, condition of Artists, future of his Co-actors and their films.

In this post I have uploaded 4 minutes and 52 seconds of important part of his speech, this will give you how far has MGR looked into the future of Tamil Cinema.

I thank Mr.Kumar of Easwar Musicals who had given me the opportunity to upload this wonderful and thought provoking speech of MGR the Seer and share this with the World. The speech is taken from Gananjali audios dedicated by Mathi Oli Shanmugam.

Two weeks back MGR movie "Kumari Kottam" was re-released in Natraj theatre, but I was not able to reach the venue. This week brand new print Devar Films "Thaai Sollai Thattadhe" was re-released.

MGR movie Ad was placed in Daily Thanthi Vellore Edition not in Chennai. There was less posters and only one type is printed but the crowd was huge. 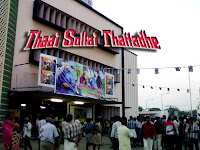 I reached the venue 5.25 p.m. B.S.Raj and Sathya was already present. The happy news is that the Special edition of Nadodi Mannan will be released this week overcoming the hurdles which I will tell in my future post. 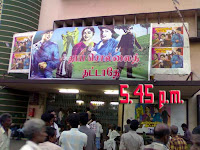 Matinee show was almost full I find people coming out of the theatre their profession were painter, tailor, rickshaw puller, street vendor etc. and large number of women. The character enacted by MGR in his movies has these professions. There was no new MGR movie after 31 years but still people are crazy about him because he told their problem, he gave confidence to them through his songs and dialogues. His presence is still felt. 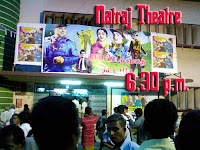 Old MGR fans were talking about this movie and the records, the cinema halls, and they showed paper cuts. Another set of people were enquiring about the Re-release of 'Ulagam Sutrum Valiban". The probable date is October 3rd or October 10th. The movie will be released simultaneously in 10 theatres in and around Chennai. 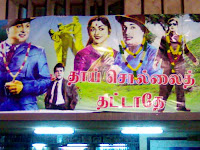 My friend was first to recognize Pradeep Balu (Jr.MGR) before me. After formal talks we went inside MGR's resting place. Jr.MGR Pradeep Balu told about his documentary about Makkal Thilagam.

After narrating some incident to us, Jr.MGR went on with his aim. Then the story shifted to today's politics like Chiru's Praja Rajyam. That Chiru is following the foot steps of MGR in politics, and the younger generation is crazy about him. 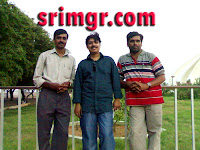 Those who are reading this blog regularly I request you to send incidents and experiences about & with MGR. Those are doing remarkable works (including social) in your area and in the memory of MGR for example MGR Fans like Sathya, S.Kumar, Meenatchi Amma etc., with contact numbers or address to replytomgr@live.in It will be put it the documentary, ”This documentary is based on MGR and his loving people,“ says Pradeep Balu. 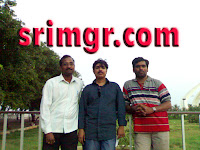 Emgeeyar Pictures "Ulagam Sutrum Valiban" is to be re-released next month after the dispute. The movie is going to be released by Diamond Pictures.

The movie songs also enhanced to DTS quality, some of the scenes in the movie are re-edited for CGI inclusion particularly climax scene. Further re-release with re-mastered in the pipe line are Emgeeyar Pictures "Nadodi Mannan" and "Adimai Penn". 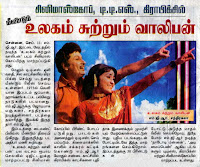