Sri MGR Year 93, 28th March Sunday
Somehow I managed to reach the theater by 6.00 pm and the ceremony has started for God MGR. The devotees started to perform their regular pooja. 14 tier garland was done by Kalaiventhan MGR Bakthargal Trust, Speaker system was done by Sri MGR Bakthargal.
The IPL wave was overcome by MGR, the crowd was huge lining from one end of the theater to another end. I saw lot of cycles and tricyles in the parking lot. The crowd was half way in the highway they physically obstructing the traffic. Their joy know no bounds.
Click here to see the crowd and their enjoyment.
Posted by Roop 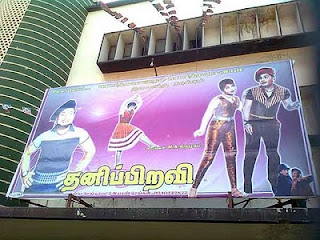 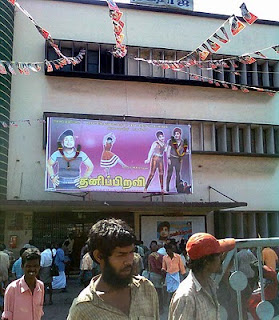 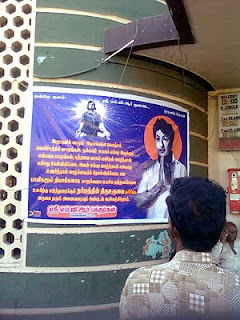 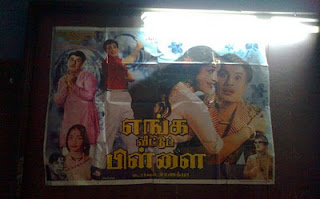 Enga Veetu Pillai will be released in Natraj a poster was fixed inside the theater, and 3 boys from nearby school (after writing the exam) came to watch this movie, one boy was singing the song Kumari pennin ullathilay from Enga Veetu pillai and said that beautifull song is from this movie. I was looking at them MGR has captivated these boys with a Love song at this age! what to say. 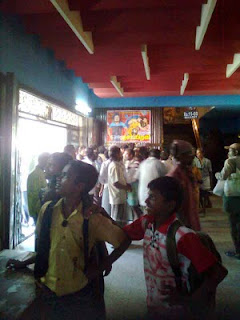 Three boys looking at the poster of MGR with awestruck by the charm of MGR.
The Video near the Counter

Some of the theaters in Chennai were not screening night shows due to IPL matches. But MGR is still going strong against this IPL wave.
Updated after 8 pm result:

Total collection from Matinee and evening show is more than Rs.9,000 plus for 2 shows theater capacity is 1200 plus for a black and white movie, highest run for this movie is 75 days for the first release.
Posted by Roop

Sri MGR Year 93, 25th March, Thursday
This week MGR black and white movie Thani Piravi will be released tomorrow in Natraj Theater. The poster was affixed in Purasawalkam area yesterday. I took this photo near Doveton. 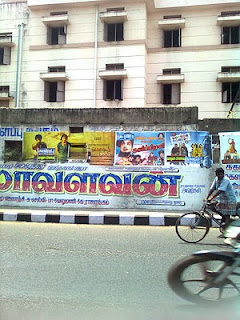 MGR Devotee from Bangalore Vinod has sent me a link about our Leader MGR which I have given below the site is still in construction phase and the article has some mistakes like the number of movies etc. It is a very long post have patience to read.
Click here for the link.
Posted by Roop

Sri MGR Year 93, 23rd March Tuesday
MGR birthday functions are celebrated in Tamilnadu and we know it is happening right from 1988. But we did not know that MGR birthday function is also celebrated in other countries were MGR Devotees and Fans reside.
MGR Fan from Singapore Mr.Chandran has forwarded an attachment in my mail with a Tamil daily an article about MGR's 93rd Birthday function celebrated in Port Dickson which is 90 km from Kuala Lumpur. The function was presided by S.Jothinathan who was former Minister.
Click here to read more...
Posted by Roop

Zee Tamil has been airing Nayagan a program about Tamil Cinema actors.
Previous week is the first week of Zee Tamils Nayagan about our beloved Leader MGR. Today Daily Thanthi gave a gist of the future program.
Posted by Roop

Sri MGR Year 93, 14th March Sunday
MGR Devotees and MGR Fans and public were standing before Mahalakshmi theater for watching the 6 pm show old black and white movie Devar Films Dharmam Thalai Kakum. Which was re-released this Friday with much fan fare.
The capacity is around 1000 and the show was houseful. I was able to take some images and videos for our blog.
Click here for more...
Posted by Roop

Sri MGR Year 93, 12th March Friday
Devar films Dharmam Thalaikakum movie is released today in Mahalakshmi theater after a long gap. The distributor have placed ads two weeks before, this is the  4th time they have placed ad in Daily Thanthi Chennai Edition.
How much money the film should generate if they have to place colour ad in a Leading daily for two weeks calculate yourself.
Below is the ad placed today, which movie ad is bigger new movie ads or MGR black white movie ad? 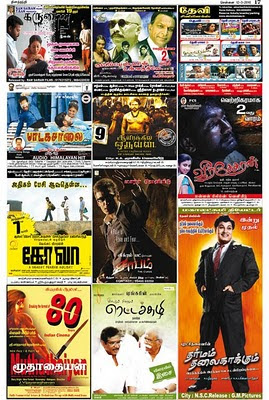 Old black and white movie should generate enough money to pay the rent of the theater, the ad charges, poster charges etc. and also give profit to the distributor.

Sri MGR Year 93, 8th March, Monday
Most actors have fan made magazines in their acting period. But after their death or retirement the magazines will vanish.
But our beloved Leader MGR is not that kind of an Actor, after becoming the Chief Minister he stopped acting in 1977 and his last film was released in January 1978. But even now we can see dedicated MGR Fan magazines in News stands. Various magazines comes out but only 2 or 3 are hitting the stands periodically now another MGR Fan magazine titled Nalai Namathey hit the stands this month from the Urimaikural MGR magazine team.
Click here to read more.
Posted by Roop

Thanks to MGR Devotee Yukesh Babu.
Posted by Roop

Above image was the ad given in Daily Thanthi Chennai digital edition, Dharmam Thalaikakum movie which was slated to be released this Friday in Mahalakshmi was postponed due to the 100th Day Function in Saravana theater.
Images and Videos will be uploaded as soon as I get the copy.
Posted by Roop

MGR Grandson has joined ADMK in September 2009, now MGCB Pradeep was appointed as Party Official Speaker. Below is the image taken from Dr.Namathu MGR official Newspaper of ADMK Party.

MGR spirit will guide him and let us wish him all success.