My father’s friend, an octogenarian is a hardcore Puratchi Thalaivar fan. Earlier he had lot of newspaper collections which I had seen in my school days. I visited him couple of months back and he showed me some of the newspaper headlines of those days. Unfortunately the time had spoiled the treasure.

I choosen two news headlines from yesteryear to share in our blog. One, MGR swearing in for the second time. Another the 3rd time, ADMK MLA’s selecting our beloved Leader. 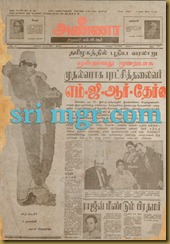 The scanned images are in lower resolution. Both are from Anna Newspaper. Anybody having the first time swearing in headline please forward the copy.

Sri MGR Year 99, 18th November, Friday
Don’t Sleep brother don’t sleep (தூங்காதே தம்பி தூங்காதே) from the movie “Nadodi Mannan”, Young one listen to the tidings (சின்ன பயலே சின்ன பயலே செய்தி கேளடா) from “Arasilangkumari” and the most memorable line “நானே போடப்போறேன் சட்டம் பொதுவில் நன்மை புரிந்திடும் திட்டம் நாடு நலம் பெறும் திட்டம்” from “Nadodi Mannan”, (I am giving only three lines from MGR songs there are more to discuss) we all know that these brilliant, soul stirring lines are written by Pattukottai Kalyanasundaram for our Puratchi Thalaivar movies, after assuming the office of Chief Minister, MGR told the press that he did not know what the three legs in his chair belong to, but he is aware that the fourth leg belongs to the immortal lines rendered by Pattukottai Kalyanasundaram. 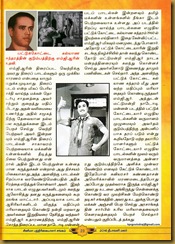 Pattukottai Kalyanasundaram died at very young age, MGR helped his family by giving royalty to his songs which appeared in his movie “Nadodi Mannan” and requested other movie producers to giving helping hand to Pattukottai Kalyanasundaram family. More information is found in the above article written by R.Govindaraj who compiled his father K.P.Ramakrishnan (MGR’s bodyguard) account in Deepawali issue of Cinema Pathrikaiyalar Sangam magazine.
Posted by Roop

One of my friend having some newspaper and magazine collections from 1960s & 1970s has asked me to go through his record. After spending some time I took some of our Purtachi Thalaivar MGR related articles for scanning, below are few scans.

I selected some articles that have appeared in 1976 period, that is 4 decades back history. 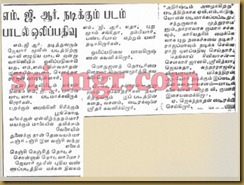 First article is about the song recording of “Anna Nee En Deivam” movie, the song was written by Vali and music composed by M.S.Viswanathan, the song is “Parakum Paingkili” a solo song for MGR. This song was not filmed as MGR had become the Chief Minister of Tamil Nadu in 1977. 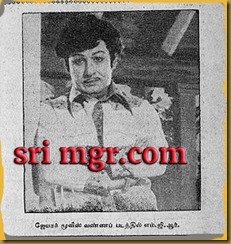 And another article is the photo of MGR leaning over the door frame. 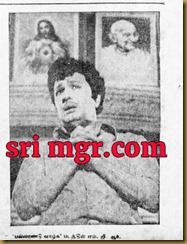 A photo from the movie “Pallandu Vazhga” to my knowledge I have not seen this MGR pose. I thought of sharing this in our MGR blog. 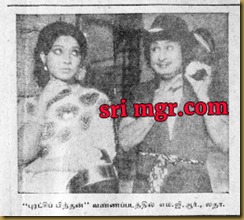 We all know that “Puratchi Pithan” was an unfinished movie, a photo was published in the Tamil daily showing MGR & Latha, and MGR holding an egg. 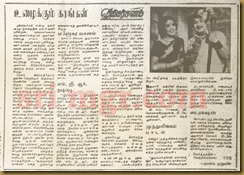 The movie review of “Uzhaikum Karangal” by Nagai Dharman. He has highlighted important aspects of the movie. Nagai Dharman has mentioned about the Deer horn fight and Rudra Thandavam performance of MGR.

The articles I had uploaded above are small and of scanning the quality is little bit diminished.