U.K. Golden Movies has released one MGR movie title in CinemaScope format for the first time. You can watch the movie "Maduraiyai Meeta Sundarapandian" in 16:9 format.


Our beloved Puratchi Thalaivar MGR's final movie Maduraiyai Meeta Sundarapandian film scenes such as palace scenes and outdoor scenes are breathtaking and we can feel the difference. The print is excellent and the audio is also good.

With the consent from the owner of UK Golden Movies Mr.Thangavel I am posting some images captured from the movie.


Former heavyweight Boxing champion Muhammad Ali passed away on June 3rd, we srimgr.com team prays for his soul to rest in peace. 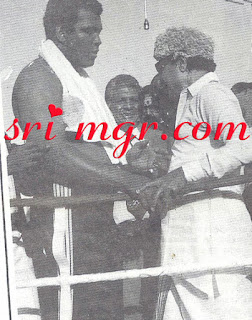 Born as Cassius Clay on 17.1.1942 (both our beloved Leader and Muhammad Ali share same birthday date) in Louisville became an Olympic gold medalist then he entered professional boxing and became champion by beating Sonny Liston. He retired from active boxing in 1981.

Muhammad Ali paid a visit to India in January 1980, and he stayed in Chennai and did an exhibition bout in old Nehru stadium arranged by Tamil Nadu Amateur Boxing Association and a private sponsor Apeejay group. He did a fight with former heavy weight champion Jimmy Ellis. The function was presided by the Chief Minister of Tamil Nadu MGR, who we knew is a sport enthusiast.

(King of Boxing with King of the Mass MGR)


After the fight MGR tried to enter the ring, but his dhoti hindered his entry, without any hint what he is going to do, MGR jumped into the ring (who was 63 years old then) much amazement of Ali. MGR gave a shield to Muhammad Ali and took hold of Ali and Ellis hand at the same time for press.

'King Ali' walked on petals on his arrival at Meenambakkam, recall veterans


The 1980 historical event organised by the then Tamil Nadu Amateur Boxing Association and a private sponsor. Ali took on former heavy weight champion Jimmy Ellis in an exhibition bout. H.Mohana Krishnan, secretary of the association, took centrestage in organising the bout and his son M.Gunasekaran was melancholic, recalling the memorable day. 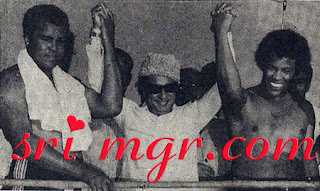 You are the boxing association's secretary right, come let us have a fight, were the first words uttered by Ali to my father, reminisced Gunasekaran.


After exchanging pleasantries the boxer, whose original name was Cassius Clay, was motored to the hotel in an open bus. I was 16 then. I remember running behind the bus and people had lined up on both sides of the roads to catch a glimpse of the King of Boxing, Gunasekaran added. 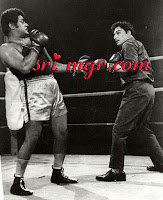 The decked up Nehru Stadium the venue, was struggling to hold the crowd that was pouring in from noon. My father and Ali had a shadow fight and then he was briefed about our then Chief Minister M.G.Ramachandran, an avid sports lover. Clippings and photos from MGR movies where he acted as a boxer, impressed Ali, who spent a considerable time in soaking in the local culture, Gunasekaran recalled...

(photos, above MGR holding the hands of Muhammad Ali and Jimmy Ellis and below from the movie Kavalkaran, MGR acted as a boxer)


Panther Publishers who have published Mohandas book titled "MGR The Man and the Myth" have now released the same book in digital format, we can read the book with our mobile phone or tablet.

Panther publishers have sent their greetings to me and informed me that the English version and as well the Tamil version "MGR Nijamum Nizhalum" will be published in e-book.

The English version is released lately and below is the link for buying the book.

Below is the extract from their mail.


We are happy to inform you that the English edition is now available as e-book for the smart phones - through the App "DailyHunt" and we will be releasing the Tamil version - "Nigamum Nilalum" soon. We will keep you posted once it is released.