Below is an article published in Dinamalar issue dated 14.1.2013 written by R.Govindaraj remembering the Pongal festival, the only festival that our beloved Leader Puratchi Thalaivar MGR celebrated.

MGR on behalf of MGR Nadaga Mandram and stunt group celebrated Pongal festival every year from 1953. Chief Guests attended the function, for the first year Director K.Subramaniyam presided the function. MGR’s bodyguard K.P.Ramakrishnan who worked with our beloved Leader MGR remembers the celebration. 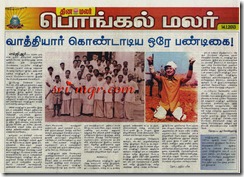 The scanned page of Dinamalar, click the above image to enlarge.


New dress with currency will be given to everybody, MGR and his family also wears the same dress during the function. MGR’s wife Sadhanandavathi who was ill also took part.
Below is the photo forwarded by R.Govindaraj to share with our MGR blog. I thank him for forwarding such a treasure. 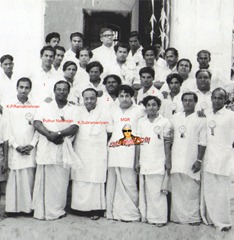 Numbered are: 1 Kamatchi Nathan (M.N.Nambiyar’s henchman in the movie Ayirathil Oruvan) 2. Gundumani 3. Madakulam Dharmalingam, to the left of him is Thirupathisamy. Place is MGR’s house,Royapettah now it is ADMK Party Head office, taken in the year 1955, pongal festival.
Posted by MGR Roop

The article is about the love of the Mothers of Tamil Nadu towards our beloved Leader Puratchi Thalaivar MGR. The article is said by MGR’s bodyguard K.P.Ramakrishnan and written by his son R.Govindaraj.

The same was published in Maalai Murasu Tamil Newspaper dt.16.1.2012, Chennai edition. Govindaraj wishes to share this in our MGR blog. 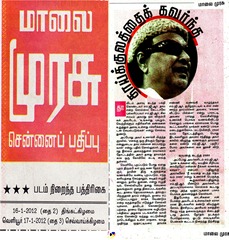 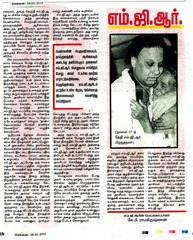 K.P.Ramakrishnan narrates some incidents that happened when our Puratchi Thalaivar MGR went on election campaign. One such incident (which happened many times) is that in a village on a sunny day MGR was looking fatigued due to heat, the village women and elderly was upset and told MGR that your face has withered raja, take care of your health, our entire village will vote for your party.

Many incidents he narrates are only happened to our Leader in this world, the devotion, love and support of “Thai Kulam” showered towards a political leader is only enjoyed by MGR.

I happened to see the Encyclopaedia of World Cinema, old edition which had the article of our beloved Leader Purtachi Thalaivar MGR. The book had allotted 1.5 pages about MGR and with a photo of MGR from Nadodi Mannan movie.

Though the article has many errors and blatant lies, I had given below the scanned pages of the Encyclopaedia and the article typed separately. 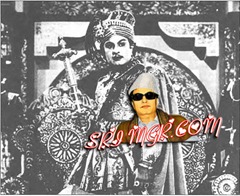 Ramachandran, Marudur Gopalamenon (1917-1987)
Aka MGR, Tamil megastar since 1950 and populist politician; one of the most controversial figures in Indian cinema. Born in Kandy, Sri Lanka (possibly in 1912). Legend has it that his birth coincided with his father's death, and the family moved to Tamil Nadu where they lived poorly. Three siblings died as well. Aged 6, joined a theatre group, the Madurai Original Boys, where he learned dancing, acting and swordplay. Screen debut for Ellis R.Duncan (1936); first major starring role in A.S.A.Sami's Rajakumari (1947).

Joined the DMK party (1953), having featured in the Karunanidhi scripted Manthiri Kumari. Apparently modelled on Douglas Fairbanks, his 50s screen persona in adventure films directed by T.R.Sundaram, Ramanna, Yoganand and P.Neelakantan constructed an image of political as well as physical invincibility (vanquishing tigers with his bare hands in Gul-e-Bakavali and righting all wrongs) identified with the people and promoting his political programme. In the 60s esp. after Thirudathe, he turned to more realistic fantasies in a contemporary setting, often playing a saintly member of an oppressed class e.g., a peasant, fisherman, rickshaw puller, gardener and taxi driver.

Member of the DMK (1953-1972) including a brief stint in the Madras Legislative Council (1962-4) member of the Legislative Assembly (1967)when the Party won the state elections. DMK Party Treasurer (1970) fell out with the DMK's boss, Karunanidhi, and used the DMK Film's propaganda idiom against the DMK itself in Nam Nadu.

Set up the rival Anna DMK (1972) claiming allegiance to the DMK's founder, Annadurai, who had died in 1969. In 1977, his party, renamed the All India Anna Dravida Munnetra Kazhagam (AIADMK) won the state elections in alliance with Indira Gandhi's Congress, became chief minister and was re-elected for three consecutive terms, organising a totalitarian crackdown on all political dissent while introducing populist schemes like the Chief Minister's Nutritious Meal Programme and taxing the poor to subsidise the rural rich. Having survived a bullet wound when he was shot by fellow actor M.R.Radha in 1967 (affecting his speech), he achieved demi-god status following a paralytic stroke in 1984 which he survived for three years, acquiring the label thrice born in the process.

Last film released in 1978. Thousands of fan clubs provide a political and promotional support structure with a constant stream of e.g. lithographs depicting the star as a godlike figure, Ganesan, who acted with MGR in Kundukkili, became an opposition MP, MGR developed a fantasy land via his movies, playing numerous double roles and borrowing as much from stage historicals as from pamphleteering rhetoric.

The conflict between these upper caste/class oppressors and MGR as a subaltern and its resolution form the core of his films. MGR, in the course of the conflict, appropriates several signs or symbols of authority or power from those who dominate.

Three such symbols that repeatedly and prominently appear are the authority to dispense justice and exercise violence, access to literacy/education and access to women. The hero's invincibility on the screen acquires a certain authenticity and appears credible not merely because the dream like experience of film watching but equally because the subaltern consciousness most often dwells between the impossible religious myth and possible history.

To construct this impossible myth, MGR used food (Mattukkara Velan, Ninaithathai Mudipavan) colour patterns, (black and red, symbols of the DMK), masquerades (often through double roles of oppressor and oppressed) etc. Viewing an MGR film has been promoted as a ritual with stories of poor people selling their blood to get money to see his films on first release. His funeral procession was attended by over 2million people. A temple has been built in Madras with MGR as the deity.

Above is the the original scanned pages.

Padmini pictures Ayirathil Oruvan nears 50th year coming July. The people who have worked in the project still alive are four (to my knowledge) one is the heroine of the movie Jayalalitha is now the Chief Minister of Tamil Nadu, second who have acted along with our beloved Leader Puratchi Thalaivar MGR is K.P.Ramakrishnan he is very well known as the personal body guard for MGR. Third is the music director M.S.Viswanathan (music rendered by duo Viswanathan and Ramamurthy, unfortunately that was the last movie they worked together). Fourth is the playback singer P.Sushila. 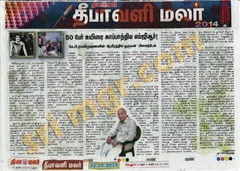 K.P.Ramakrishnan starts from how the producer and director B.R.Panthalu thought about approaching our Puratchi Thalaivar for the project and also gives some insight into the making of two ships (caravan type) which was used in the movie.

He also tells about the hardships they had encountered during the shooting spot in Garware, Goa and ocean scenes which were shot 15 kilometers from the shores. MGR’s thoughts during the Hindi agitation and how his mentor adviced MGR to stay away from the protest.

Another important part is how Puratchi Thalaivar MGR saved the crews, which should be read and to be understood that how much MGR cared and alert he was.

Some incidents that showed MGR’s patriotism is well known to general public such as his donation of Rs.75,000 during Indo China war in 1962 and Indo Pakistan war in 1965.

Our beloved Leader Puratchi Thalaivar MGR’s patriotism has bloomed when he was 12 years old and another incident of MGR donating 2 Annas (that is the only amount he had in his pocket) to Mahatma Gandhi who has asked the people to donate generously towards earthquake relief fund.

This Karaikudi incident was already narrated by MGR’s bodyguard K.P.Ramakrishnan during his speech in one of MGR’s birthday function, which I had already uploaded in our MGR blog.

Below is an article written by Govindaraj from the assistance of his father and MGR’s personal body guard K.P.Ramakrishnan in Agnimalargal issue dated April 2014. 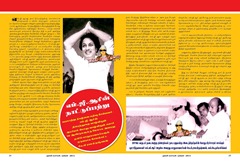 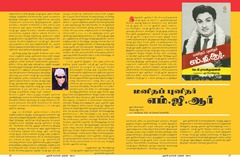