MGR Devotee Sathya had captured the precious moment of video and images to share with our MGR fans and readers of MGR blog.

The Governor accompanied by his wife came to the memorial by 10.30 and spent nearly 20 minutes and paid his respects.

Below is the video showing Governors visit.

Rest of his visit you can see in the images below. 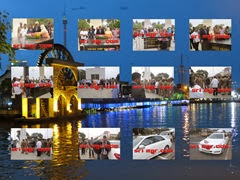 Before leaving the Governor shook hands with the security officers (resembling our God’s nature) and took photo. Earlier he gave a brief interview to the media.

Ponmanachemmal Sri MGR Welfare Association every week gives free food to the poor. This week they gave annadanam in two places one, MGR resting place and another MGR Memorial T.Nagar. Below is the images forwarded by the Secretary of Ponmanachemmal Sri MGR Welfare Association and also the Editor of Urimaikural MGR magazine B.S.Raju, to share in our MGR Blog. 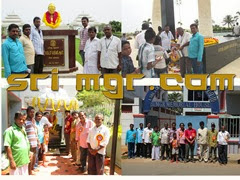 Next post will be the video of Melaka Governor Tun Mohd Khalil bin Yaakob visit to our Puratchi Thalaivar MGR resting place. 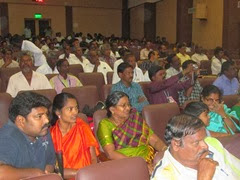 A part of the audience who attended the function. 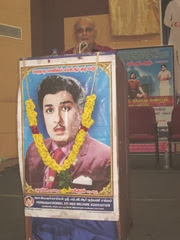 Below is the speech of Mr.Muniappa, Ex MLA of Karnataka who is also the chief guest of the function. Above Karnataka Ex MLA Muniappa speaking about our Puratchi Thalaivar politics, his movie releases in Karnataka and his Karnataka fans.

Below is the 30 minutes speech of Mr.Muniappa, given in two parts. Total video size 160 MB.

MGR movie clippings were shown in the function and a 30 minutes video of MGR Vallalin Varalaru was screened in the end. 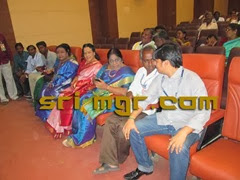 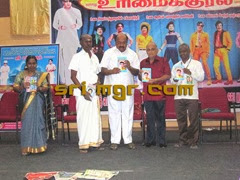 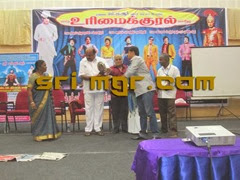 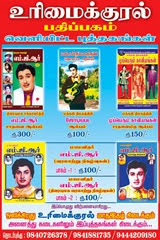 The above image is the books released by Olikirathu Urimaikural for the past 6 months.

Kovai Chezhian produced one MGR movie titled Uzhaikum Karangal. The movie was peppered with political scenario and dialogs of post 1972. The highlight of the movie is the performance of MGR, Deer Horn (Maan Kombu) fight and philosophical song.

Recently Uzhaikum Karangal movie was telecasted in Sun Life channel, I captured some of the images to share in our MGR Blog.

And we have already posted the movie frame by frame. Below is the link of that post.

The title card shows artist representation of the movie title, below is the link.

Earlier we had posted some images, in this post we will be uploading the video and some of the images from the function.

Earlier Patti Mandram was conducted on the topic of “Which trait is more pronounced in MGR Movies” - ‘his bravery’ or ‘his humanitarian deed’. Below is the image showing MGR Devotee Kaliya Perumal from Pondicherry speaking in behalf of ‘MGR’s humanitarian deed group’.

Below are the images showing the photo exhibition kept on behalf of Ponmanachemmal Sri MGR Welfare Association.

Kavingnar Poovai Senguttuvan was honoured and he gave a 30 minutes speech on his experience with MGR and his movies. He had written the immortal lyric “Naan Unga Veetu Pillai” for the movie Puthiya Bhoomi. He had said that MGR did not corrected one line from the lyric and MGR was very much satisfied with his work.

From 5 pm to 6 pm MGR Devotees showed their devotion by garlanding MGR banner and lighting camphor. Below is the video showing MGR devotees loyalty and devotion.

Captured in HD for the first time but uploaded in normal WMV file format.

Coming up in the next post is the half an hour speech of Karnataka Ex MLA Muniappa about our beloved God Puratchi Thalaivar MGR his movies and politics of Karnataka during MGR’ period.

By the grace of Makkal Thilagam MGR the function was a grand success. Ponmanachemmal Sri MGR Welfare Association along with Olikirathu Urimaikural MGR magazine celebrated our beloved Leader Puratchi Thalaivar MGR function today. This is their 9th consecutive successful function.

The function was held in Sir P.T.Thiyagaraya Hall, G.N.Chetty Road, T.Nagar, Chennai from 2 pm to 10 pm. Earlier association meeting was held from 10 am to 2 pm and the Id card were given to the members of the association.

A patti mandram was conducted the topic is, Which is more pronounced in MGR movies “His bravery” or “His humanitarian Deed”. The hot dispute went in both parties favour as the Judge said that bravery and humanity of MGR cannot be seen as different but as a single trait.

As per the protocol MGR devotees performed the pooja, seen in the image are, MGR Devotees Sathya (Chennai) and Manohar (Madurai).

More to come are the speech of Chief Guest of the function and Karnataka Ex MLA Muniappa, Author Mekala Chitravel, M.G.C.Chandran, Actress Rajasri and Jayanthi Kannappan.

Above image is the 30 minute speech of Ex MLA Muniappa which will be posted soon in our Blog.

Recently crystal clear print, Oriental Pictures Ninaithathai Mudipavan was telecasted in Murasu TV on 19th January. Here are some of the images captured during the movie.

MGR dons dual role one as Villager and Band Master Sundaram and Diamond smuggler Ranjith. This is a rare character of MGR doing a negative role. The story starts with Sundaram has a physically challenged sister enacted by Saradha, nobody wish to marry her because of her disability. One comes up to marry her if he is paid a high dowry, Sundaram then plans to go to the city to earn money.

Same time the Police is waiting to get a solid proof of Ranjith’s involvement  in stealing diamonds. The Police comes with a plan of lady police Manjula to be introduced as Queen who has diamond mines. They all go and attend the function of disguise party. Band master Sundaram on his visit to the city was mistaken as Ranjith and was asked to attend the function.  Also Ranjith comes in disguise and taken aback by the resemblance of Sundaram. He plans to use his look alike to confuse the police in his future plans. During the function Ranjith calls his aides to fetch Sundaram and take him to his home.

Sundaram is introduced to Manjula and a beautiful philosophical song follows. After the party Sundaram is taken by his aides and he meets the boss Ranjith.

A little about the character of Ranjith he is a cool and calculative boss. Does not show his feelings and uses others to his goal. Sundaram who is a naive villager tells about his visit and Ranjith uses his manipulative speech and charisma and gets consent of Sundaram to act as Ranjith for some days. A salary was fixed for Sundaram’s performance. As he is a villager Latha who is the lover of Ranjith teaches him to read, write and speak English and changes his appearance to resemble Ranjith. In due course the salary is sent to Sundaram residence but his Aunt ill treats his sister and one day heavy rain lashes the village and the aunt dies. Saradha becomes an orphan and with her dog goes in search of his brother Sundaram.

Birthday of Ranjith was celebrated and in place of Ranjith, Sundaram takes up and he goes in dealing with the diamond smuggling, police comes up during the diamond exchange and Nambiyar who is a police officer shoots Ranjith and he gets hit in the leg and immobilizes him for one month. Sundaram was asked to attend the office and he meets Thengai Srinivasan who first gave Sukku Coffee on his arrival to the city. Sundaram gives 500 rupees cheque to him as a token of love (re creating MGR’s off screen benevolence).

One day while Sundaram was taught about fencing lessons happens to see a marriage procession, he escapes and sing to his content on seeing the physically challenged girl as the bride groom. His sister see this and tries to reach his brother but he is whisked away by Latha. Then Saradha meets some bad guys on her way and is saved by Nambiyar! who takes her to his home and gives shelter.

Ranjith after recuperating comes to know that Sundaram sister is in the city and goes to the police officer home when he is away and gets Nambiyar mother permission to take his sister. The dog easily understands that Ranjith is not Sundaram and the dog runs behind Ranjith car, but Ranjith’s aides tries to kill the dog and it escapes from their plan.

Sundaram in Ranjith’s office calls Manjula and fixes a place to meet, now the police hatches a plan by giving truth speaking pills with the juice to Ranjith so that he will tell all his activities then he can be arrested. But the plan fails as both Sundaram and Manjula drinks the juice and they speak about their love, a mesmerizing duet song follows.

Sundaram comes to know the real colour of Ranjith and does a fight to uphold justice but was over powered and Ranjith uses his trump card of Sundaram sister. Finally Sundaram accepts Ranjith’s plan.

The diamond exhibition takes place Ranjith uses his special formula and steals the diamonds and jewellery along with the gold pedant having a receiver transmitting the where about of the jewelry. At the last minute Sundaram who acted as he had tasted the coke springs up and hits Ranjith from the back, Ranjith become unconscious, Sundaram as Ranjith enters the hide out and finds that his sister is in custody. After Ranjith wakes up and understands that he is outwitted by a villager rushes to make it right and a fight takes place but the police enters the scene and Ranjith who is very calculative and shrewd now acts as that he is the innocent villager Sundaram. Police and his sister gets confused and arrests both of them.

In the court after many enquires and a final resort police uses Ranjith’s mother as the bait and Ranjith tells the truth and also his back ground why he became a diamond smuggler.

Sundaram is released and marriage of Nambiyar and Saradha takes place the marriage procession continues over a head title appears “Ninaithathai Mudithavan”.

MGR Devotee Sathya observes Mentors remembrance every year. This year free food and books were given to the orphan children of Anbu Illam in Mathur, Chennai. Below are some of the images. 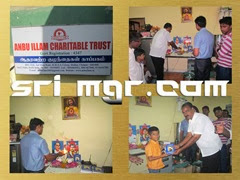 Some of the devotees who participated this year are Tambaram Baskar, Unny, Venkat, Murali, Nandakumar, Rafique (24 years old) Karthik (13 years) and friends. 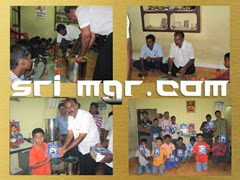 The day was observed yesterday in Anbu Illam a home for orphan and needy children. 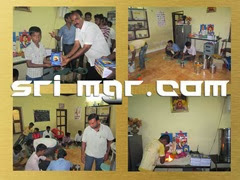 Above images are given by MGR Devotee Sathya to share in our MGR Blog.