CHENNAI: Vivid posters with the image of the late actor-turned-Chief Minister MG Ramachandran (MGR), 100-odd rare and vintage images of the ‘Makkal Thilagam’, his iconic fur cap, glass, watch and his Mark 4 Ambassador car bearing the registration number ‘MGR 4777’ on display, all part of MGR Centenary celebrations, World MGR Peravai Delegates conference, were our initial observations as we entered Vels University in Pallavaram.

Thousands of delegates and MGR followers from across the world had gathered. Raju, an avid MGR ‘devotee’, clad in a vivid yellow pant-shirt and a bright red hat, announced, “MGR is my oxygen!” Talking about his love for his ‘Deivam’ (god) he said, “For all special occasions, I dress like him. It’s his Centenary celebration. We will love him forever.” A 60-something Kannappan caught our eyes. “I have been dressing like ‘thalaivar’ for close to 30 years now. From the fur cap, and dress to the black glass, I make sure everything is perfect. Initially, look-alikes were looked at with awe, now there are too many. So, it’s become a trivial affair,” he sighed. 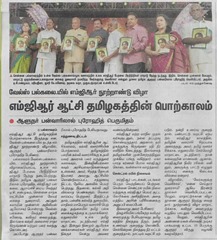 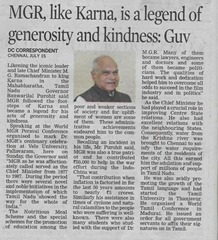 Addressing the audience, Saidai Duraisamy said, “This is a special occasion where MGR’s followers from across the globe have come together to celebrate the doyen. He gave so much to the society and we are forever indebted to him.” Concurring, Ishari K Ganesh, founder Chairman and Chancellor of Vels University shared, “MGR was not just a politician… he was a great politician and statesman. He has contributed a lot to the upliftment of the underprivileged and it’s heartwarming that we are here to remember it all.” 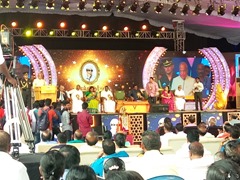 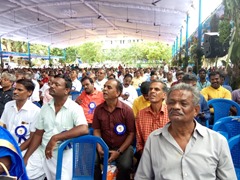 The chief guest of the event, Governor of Tamil Nadu, Banwarilal Purohit gushed with praises and good words of the late CM. “The generosity of MGR knew no bounds. He was like Karnan,” he said. A display of traditional performing arts and the launch of the trailer of the MGR’s animation movie ‘Kizhakku Africavil Raju’, were also held. 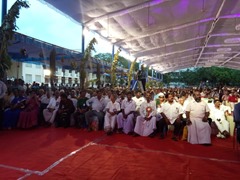 I was awestruck and at the same time flabbergasted after reading some our beloved Leader Puratchi Thalaivar MGR’s counters in Assembly and as well as in the dais.

Any actor can outsmart his adversaries in the reel life with help of his story writer and dialog writer but in real life?

Here in the above video MGR when he was Chief Minister attended the marriage function of Kumari Anandan’s daughter Tamil Isai Soundarajan. The marriage was presided by the Opposition Leader Karunanidhi and other dignitaries. Before MGR’s speech Karunanidhi took the mike and made his mark. Now MGR had to counter, see for yourself how brilliantly MGR accomplishes his work. MGR advises the couple with simple words and logical approach to life.