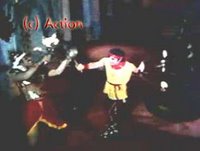 The story of the Film is the real hero, besides to a MGR movie, story is also a vital ingredient. Let us look at a typical MGR film (which presented above in pictures) the Hero is an Honest person, and a lovable character. He has a widowed mother (most probably) the hero has to solve or avenge for his father's death, his country or the difficulties of downtrodden people. The heroine proposes first and duet song with colourful costumes proceeds. Variety of fights that too an honest fights and there is no cheating involved. Fights are face to face you can see the difference between MGR and other Hero films that MGR never attacks a person from behind, never stabs or kills them from back. Every fight is face to face. And finally the film ends in a harmonious note. All together his movie portrays postive attitude in every frame. His solo song lifts the spirit and our confidence level.

Here is the formula a + b + c x d = MGR theme or MGR formula for a successful film. Whereas (a) is the main Plot, (b) is the Love songs and scenes, (c) is the Action and (d) is the positive thinking portrayed through songs and visualizations.

The Story of Adimai Pen

A girl was married to one Ruler (MGR) but another Ruler named Sengodan played by Asokan likes her. After some years Sengodan on a hunting trial meets the girl who was now a Queen, he proposes but the Queen points out that she is a mother, but Sengodan tries to kill her son, the Queen uses an axe and cuts Sengodan's right leg. This brings dishonest to Sengodan's country men.

MGR on hearing goes to Sengodan's country and asks Justice. And Sengodan agrees for a duel. The fight takes place over the net below Javelins was placed; who ever falls on the Net will get pierced. The rule is if the Fighter loses his weapon or falls from the net it is considered as a defeat and that the ruler and the people of that Country will become slaves to whoever wins the duel.

As Sengodan has one leg, MGR binds his right leg and fights with him, the result MGR wins but Sengodan throws a Javelin and kills MGR. Sengodan orders his men to get hold of the Country and summon the Queen and her son. One of MGR's close aides escapes and reaches his country but he was able to save the queen but not the Prince, who was taken prisoner. All the girls in their country are made slaves and thus the title.

The Queen was in hiding and year’s rolls by. The close aide was captured and sentenced to prison where he meets the Prince (MGR) who was allowed to live in a 2 feet high cell, MGR was introduced as a Barbarian, he did not know how to talk, how to eat with his hands, and he did not know that he was a human being. The close aide was taken aback on seeing the condition of his Leader. Some how he and his Leader escape from the prison via a river. He manages to save his Leader and dies in his grand daughter’s hand getting promise from her that she has to teach everything to him and make him the Ruler again and abolish the slavery of their Country. The Grand daughter Jeeva, acted by Jayalalitha promises him and takes MGR to her hut. But the traveling made on the river makes him sick. So his hands and legs are tied, showing his beautiful physique. MGR behaves rudely but she calms herself and treats him good. She raises him against all odds. She teaches him to speak and write. Slowly he understands who he is. But still he was not able to walk like others, stands like a hunchback because he was grown up in 2 feet high cell. She also teaches him all kinds of martial arts.

As MGR character is a man who helps damsel in distress saves a girl from two warriors, and when he tries to help the girl who was binded between two heavy wooden plank and MGR while lifting the plank, his curved spine straightens he was able to stand like normal person. And now Jeeva tells MGR all about his tasks and shows his mother's hiding place. On seeing his mother’s condition MGR vows to his mother that he will release the slave girls and his Country from the clutches of Sengodan. MGR with the help of Jeeva and others attack small group of soldiers and show his mark to Sengodan. MGR and his followers strikes often and frees up the girls from slavery. On one such assault, he comes upon a Commander of neighbouring nation, who was also a relative of Sengodan, played by R.S.Manohar, he was astonished on seeing Jeeva because his Nation Ruler is also another Jayalalitha. He conspires to replace the real Queen with Jeeva and take over the country. This conspiracy leads to the separation of MGR and Jeeva from his followers. They are captured by the Commander claiming MGR as a spy and hides Jeeva in another place, keeping MGR and his friend in the trial.

The Queen presides over the trial as she is also the sister of Jeeva, MGR also believes that his sweet heart is the Queen and hates to look at her. MGR's hands were bounded and were pulled by strong men on both sides. MGR shows his physical strength and throws both men. The Queen was impressed and attracted to MGR and orders to release and appoints him as her special body guard.

The Commander hatches a plan to kill both the Queen and her body guard and ask her to come for a Party. But the poisoned drink was misplaced by one of MGR's close aides acted by Cho who pretends as a magician and practices Witch craft.

The Commander having only one card in his sleeve orders to arrest MGR and the Queen. He pleads with Jeeva to act as the Queen so she and her Leader can be freed and allowed to return to their country. She accepts and replaces the real Queen and the Queen was dressed in Jeeva's cloth and kept in captivity, later to be killed. The commander goes to the prison and tells his plan but MGR cleverly kills the commander and escapes with the Queen thinking that she is real Jeeva.

After a long journey MGR reaches his country, due to his long absence the Country has changed, their house gutted with fire and farms plundered, his own men were now against him. MGR tells the whole story and makes them to rejoin the army. The Queen now joins the Sengodan side and waits to take revenge.

Same time MGR mother was captured by Sengodans men and announces the news of going to kill her in public. MGR and his men secretly enter the palace and fights with Sengodan and MGR likes to pay a man back in his own coin kills him as Sengodan has done to his father, releases his mother, his lover from the Lion and his Kingdom from Sengodan. The Queen also dies in the end and the film ends in a harmonious note.

Vengaiyan: MGR dons dual role as father and son, His hunchback character and barbaric activities like trying to drink the water like an animal from the bowl and doing the same with a cup, seeing his figure in the mirror and reacting and innocently asking why he is not kissed by Jeeva when she kisses and say good bye to all kids who come to learn are very well portrayed by him. The questions he ask about why he has to learn martial arts, the enemies, and how the enemies look like, and silly questions like how the fight will look like and so on that every child would ask.

And also how a Leader should behave in time of crisis and how to manage his men and his enemies are very beautifully narrated like many other MGR films. His love to his mother and the vow to regain his country in a clever way depicts his real character.

Sengodan: Played by Asokan … no he lived by the Character, as time is a good healer, his principles never changes in time. His disgust of not able to achieve his goals is depicted in every frame. His lion voice and modulated dialogues is another feather to his cap. His villainous laugh in the climax still echoes in my ears.

Jeeva/Queen: I think she has done a larger than life role in "Adimai Pen" she contrasted between a poor peasant girl and Queen. Her walk and look of a Queen is terrific. Also she is a good dancer, she might have exhausted after the dance sequence in the Desert. As per the story she is a teacher who teaches Martial arts to MGR (who is well known martial artist) the storyboard people questioned that the people will not digest that she is teaching MGR but MGR had confidence that his fans will not be embarrassed, after screening and huge success his idea proved right.

Costumes: The costumes of the film have two types one is rough looking and another Roman type. MGR cleverly used rough cloth to a peace loving people and delicate Roman style for Power hungry, depicting that nobility is not in the dress but in the heart.

Action: Or fights are all different kind as you expect in a MGR film the first fight scene on the nets and the last fighting scene with Lion is not pictured previously in any Tamil film. MGR as a Hunchback used wrestling techniques of gracious body movement and not using that much of fist for fighting. Swash buckling Prison fight with R.S.Manohar and his army is also worth mentioning.

Editing: As you know the film has 24 frames per second, and MGR used more 6 frame bits to Lion fights which boosts the thrill in the climax and shows MGR editing prowess. Thousand of footage used for the 10 minute Lion fight.

Camera: There is no ideal frame, the frame is always moving, zooming, panning and tilting, great camera work was again is in the Lion fight. Magnificent scenes include thousands of Camels marching in the desert and the song shot in Jaipur palace which I have mentioned in the previous blog are tip of an ice berg. The Cameraman V.Ramamurthy proved his mantle.