Beloved Leader Puratchi Thalaivar MGR’s costume designer have quoted that MGR asks to stitch couple of dresses for a situation out of that he will choose only one.

Recently someone in the Facebook have uploaded the costumes used by MGR and Sivaji in Mumbai cinema museum. Of this the Adimai Penn costume was in display.

The dress is in immaculate and exceptional condition. To the left of the image we can see another mannequin the shadow shows same kind of costume. But he has not uploaded other image.

To my knowledge the above costume did not appear in the final cut of the film. Maybe MGR could have used in some other scene or like I said earlier it may be another set of dress that he did not choose to wear in the film.

The Good, The Bad And The Holy


Today is the birth centenary of M.N.Nambiar the most famous and most hated villain for MGR fans. Though Nambiar played opposing role to our beloved Leader Puratchi Thalaivar MGR in reel life but they were close friends in real life.

To commemorate Nambiar swami's centenary his grand son Dipak Nambiar is going to publish a book, the name is the title of this post, Nambiar Swami The Good, The Bad and The Holy. The publisher is Harper Collins.

The information was shared by MGR's bodyguard K.P.Ramakrishnan's son Govindaraj. 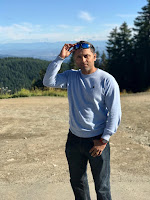