Science fiction genre is seldom used in Tamil movies and we all know that our beloved Leader Puratchi Thalaivar MGR had acted in one sci-fi movie "Kalai Arasi" which was released in 1963. Nowadays frequently aired though the movie is more than 50 years but still has the entertainment value. 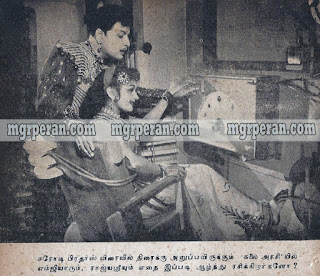 Below is the review written for "Kalai Arasi" movie in Indian Express newspaper in April 1963.

Film stories revolving round "doubles" have been quite numerous on the screen. Sarodi pictures "Kalai Arasi" adds one more to that category of pictures.

A social-cum-fantasy, the film is now running to crowded houses at Plaza, Murugan, Mekala and Jayaraj in the city.

The physical resemblance between two women and the complications it creates are treated here more as an off-shoot of the story than being its main plank.

The central character in the story is a young woman (P.Bhanumathi) who is kidnapped by a man from outer space, and is whisked off to a planet in a flying saucer. There she teaches music to the daughter of a space-king and propagates the cultural heritage of South India to the inhabitants in the planet.

Meanwhile, the father of the girl continues his search for her and through his ward meets another insane girl, looking exactly like his own daughter.

Mohan (M.G.Ramachandran) the college-mate of the zamindar's daughter, takes upon himself to find the girl and after over-powering one of the spacemen, air dashes to the planet in the flying saucer. He finds her and works his way to come down to the earth. How the young man overcomes all his obstacles in the planet and how the identity of the two girls is established, form the climax of the film, which is studded with a plethora of synthetic thrills, stunts and chases.

Directed by A.Kasilingam, the film has all the ingredients that make a successful box office production.

The film is exceptionally good in outdoor and trick photography, for which credit goes to the cinematographer J.G.Vijayam. Music by K.V.Mahadevan is good.


It is disheartening for us when Mr.Kalaivanan called me and informed that his wife Shanthi Kalaivanan, the person behind the construction of MGR temple in Nathamedu, breathed her last today morning. Couple of days back one of MGR devotee Venkat told in spite of her illness she regularly performed early morning pooja to our thalaivar in the temple and also she is the person who decorated MGR's mother idol. 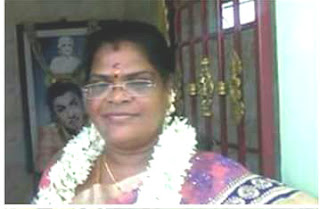 We srimgr.com team prays for her soul to rest in peace.
Posted by Roop


Many old movies are being digitized and re-released frequently. Couple of years back we observed many of our beloved Leader Puratchi Thalaivar MGR starrer movies such as Nadodi Mannan, Adimai Penn and Ulagam Sutrum Valiban were digitized and released over South India. Recently Rickshawkaran was re-released in digital and DTS format. 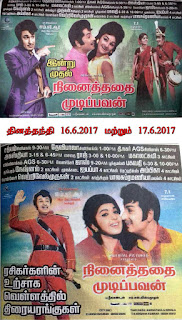 
This week 16.6.2017, Oriental Pictures "Ninaithathai Mudipavan" was released in 15 theatres in around Chennai city. The film distributor had given many ads in leading newspapers for this digital delight. The response is good. More news will be published in our blog soon.


One of MGR Devotee Yukesh Babu has forwarded some images to share in our blog.

Presently, I had an opportunity to watch one program in Vijay TV it is spoof of our Puratchi Thalaivar MGR's scintillating action movie Ayirathil Oruvan, and one of the judges is Baghyaraj.

The centre stage has a ship and in the background a large screen showing some dazzling backgrounds. As a fan I was not satisfied on the portrayal of Manimaran on screen by a boy. One instance, after Manimaran consenting to be a pirate, the boy while leaving the scene calls his comrades as "adimaigale"! (slaves) what? ridiculous isn't it. The whole concept of Manimaran character falls. But considering the age and how well he should known the background of our Thalaivar, we can pardon. The boy tried to imitate the post 1967 tone of MGR, he tried his best in showing MGR antics of Marthandan character from Nadodi Mannan.

Apart from such mistakes we have to appreciate him for his performance and we have to take into consideration that his parents who are born a couple of decades after that movie, the remarkable image, the embodiment of MGR which imbibed in his young mind. Moreover they have already spoofed many movies and their heros which were all a pure mockery, this one stands apart. As one of the judge mentioned that representing MGR who is God to many is a very dangerous one. 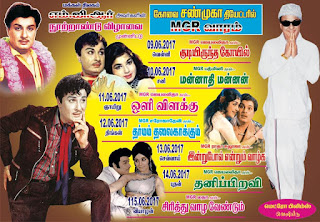 As part of MGR's centenary celebration MGR starrer 7 movies are re-released in Coimbatore this week the image is given above. The news is shared by MGR Devotee Yukesh Babu.