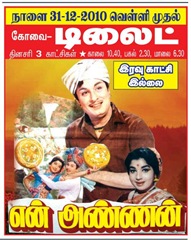 And a new book named Nadodi Mannan written by Diwan is recently published by Najaath Publications (spelling may be wrong) this book can be purchased in this address Najaath Publications, 106 F/4A, Thiruvanathapuram Road, Palayamkottai – 627 002, Thirunelveli District.

The book will be reviewed by us as soon as we get the copy. The above two information's were passed over by MGR Devotee Yukesh Babu. The images are taken from Daily Thanthi Chennai digital edition and Maalaimalar Coimbatore digital edition respectively.

Here are the two posts published by MGR’s Grandson MGCB Pradeep about the 23rd Anniversary conducted by MGR Devotees and MGR Fans in MGR’s resting place. Sorry for the delay as I was not near the PC.

Part two post consists of images of Malaysian MGR Fans who came to pay their tribute.

High Definition video uploaded, thanks to MGCB Pradeep for his commendable work.

On behalf of MGR Fans and Devotees and Olikirathu Urimaikural Magazine, a small procession and floral tribute was conducted today in MGR’s resting place.

17 MGR Fans from Malaysia and from Bangalore MGR Fans also came to pay their tribute to our Beloved MGR. The images and videos will be uploaded by MGR’s Grandson MGCB Pradeep soon. 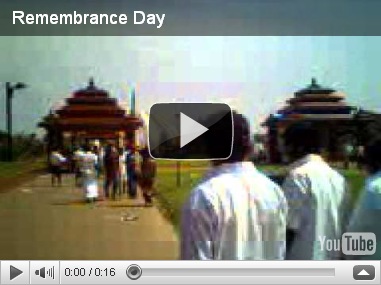 Sri MGR Year 93, 22nd December Wednesday
Click the link below for the next part of the story of Sathileelavathi movie. And you can feal how much minutes MGR should have appeared in the movie.
Click here.
Posted by Roop

Email ThisBlogThis!Share to TwitterShare to FacebookShare to Pinterest
Labels: sathileelavathi

MGR debut movie Sathileelavathi was released on 28.3.1936, the movie was started in the year 1935. The movie which stared M.K.Radha, M.G.Chakrapani, MGR, N.S.Krishnan, T.S.Balaiah, many of the stars debut movie was Sathileelavathi. Directed by Ellis R.Duncan, the story was written by Gemini S.S.Vasan.

The story was already enacted as Drama and at first MGR was promised for a meaty role. In his biography “Nan Enn Piranthen” MGR has mentioned in a detailed manner how he got the chance to act in the movie. First he was selected to act as M.K.Radha’s friend, then it was changed to Villain, then to henchmen and lastly he was given the role as an Inspector named as Rangiah Naidu.

The first shot he acted was riding a bicycle, though under his Mother’s patronage and strictness MGR did not know how to ride a bicycle, when he was asked that he know to ride a cycle, he said yes without hesitation and he practiced cycling.

A clipping from the movie and MGR riding a cycle was telecasted in Doordarshan during early 1980s. So far young MGR Devotees and young MGR Fans did not have chance to see the movie.

Here is the story of Sathileelavathi.

Our beloved Leader Puratchi Thalaivar MGR’s remembrance Day will be held in Chennai a small procession by MGR’s Grandson MGCB Pradeep will be conducted by 11.30 am, interested MGR Devotees, MGR Fans and our Blog readers are requested to assemble on 24th December 11 am before Labour Statue, Marina Beach.

MGR and his Martial Arts

A look into the Martial arts performed by MGR in his movie Neerum Nerupum.

MGR and a Microbiologist

Below is the Black and White and as well as Coloured image from the movie Panakari. The original black and white photo was coloured by T.Srinivasan to know more about the photos please click the coloured image. 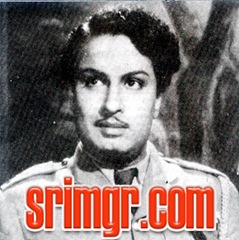 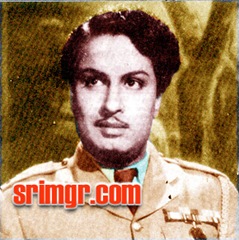 MGR’s Magnum Opus movie “Adimai Penn” is re-released in Thirunelveli and 5 other centres this week, Below is the image taken from Daily thanthi Digital edition. 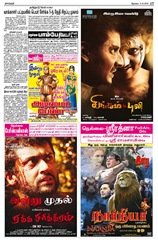 The News was forwarded by MGR Devotee from Bangalore S.Vinod.

Previously in October 2008 when Ulagam Sutrum Valiban was re-released in DTS, the same day all over Tamil Nadu Nellai Bombay grossed the maximum collection.

MGR Fans meet for the MGR 75th Year in Cinema and 94th Birthday function that are to be held in Dindukal, Chennai and Bangalore was conducted in Chennai on 28.11.2010.
Click here to know more about the meet and images.
Posted by Roop

MGR’s secret of success as a Leader is not only the ability of judging himself and his enemies but also his cautious approach about his enviornment, this kind of approach is seldom seen in other Leaders. Many personalities have written about this unique quality in their books. Even DGP Mohandas has mentioned this trait as the Third eye of MGR.

Here is an article how MGR was cautious, the incidents narrated by MGR’s Body Guard K.P.Ramakrishnan and written by his Son, to prove how Unique Leader is our Beloved MGR, the article appeared in Gokulam Kathir. The news is forwarded by MGCB Pradeep.