A Flexible and Deadly Blade


The urumi or curling blade in English is a type of weapon used in martial arts and its origin is from South India. This weapon is known in Tamil as ‘surul vaal’, as its name suggests, this weapon consists of a metal blade that is wielded like a whip. The surul vaal has often been described as one of the more bizarre martial arts weapon that entire world has seen. It is an extremely dangerous weapon, not only for those whom it is used against, but equally so for its wielder. Thus, this weapon is one that is exceptionally difficult to master.

This urumi or surul vaal was used by our Puratchi Thalaivar MGR for the climax action scene in "Rickshawkaran". After, MGR breaks away from the chains he draws the deadliest weapon from his belt which is the correct way of placing the surul vaal.

There is no knuckle guard only thumb guard is present for protection of the wielder, MGR has took lot of risk. We all know that Puratchi Thalaivar is well versed in various martial arts this surul vaal technique is taught in final level in Kalaripayattu. Because it is a difficult weapon to use.

Click the image to enlarge, as I have posted the above images to comprehend how much lengthy weapon MGR uses. While performing this art in the table, MGR uses lengthier one which is roughly 9 feet.

This fight scene is more than enough for us but MGR while swinging the weapon over his shoulders in arcs, performs yet another breathtaking jump over oil barrel. MGR the master in martial arts and master entertainer.


MGR fan members in Facebook and Mayyam will know who is Muthaiyan. He is one of the MGR fans who had a special talent in uploading Puratchi Thalaivar MGR images from his movies. He had a knack of exhibiting MGR in various themes, as he had experience in audio-visual his images stands apart from other MGR fans. 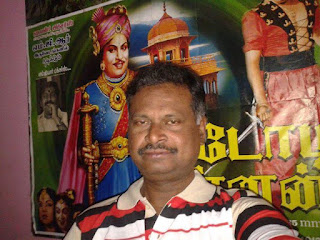 It is disheartening to me when I came to know that Muthaiyan from Salem is no more. He passed away on 11th April, 2017. We have lost one hard working guy who carried MGR legacy to the media. We srimgr.com team prays for his soul to rest in peace and our heartfelt condolences to the grieving family.

Muthaiyan once gave me title cards of most of MGR movies, I took all the colour movie title cards and uploaded in our MGR blog a couple of years back. The images he posted from the video will give a doubt from which movie MGR had given such a pose and a specialist in still images taken during action scenes without jerks. His works include collection of MGR's titles shown in the title card such as Makkal Thilagam, Puratchi Nadigar, Ponmanachemmal and Puratchi Thalaivar from every movie MGR acted, types of glasses he used, MGR in various disguises, uploading MGR smile images, collage of MGR images etc. He used to post in alphabetical order and he used to work late hours, you can still see his posting in mayyam which are uploaded during 2 and 3 am. I want to say about his humour, he posted his bike and named it as "Kadhal Vaganam" remembering one of Thalaivar movie. He is against using water mark in MGR images and he also not wanted to use his name in his shared images.

His work which I used in our MGR blog

Below are some of his works: (Thousands of images he had uploaded in facebook) 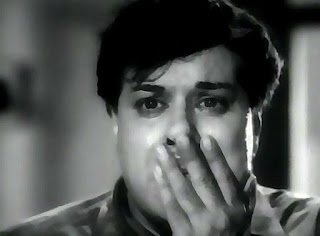 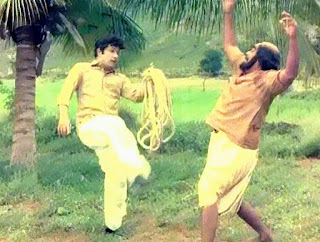 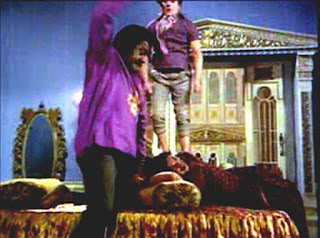 MGR in air from Rickshawkaran 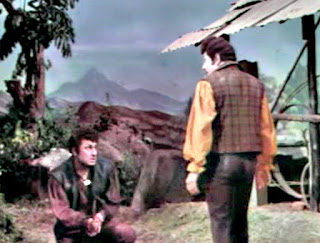 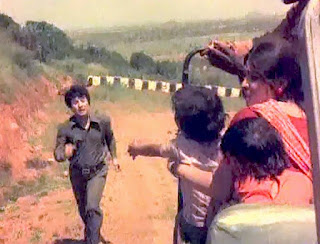 MGR running behind a jeep from Pallandu Vazhga 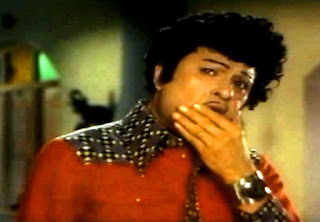 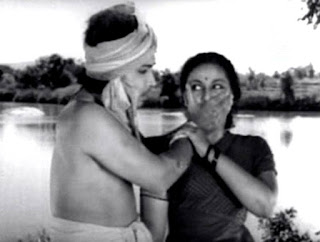 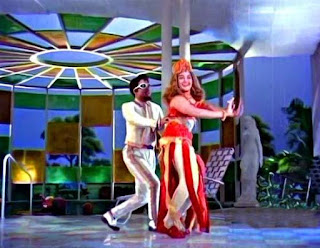 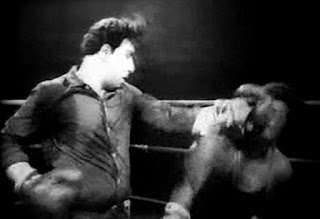 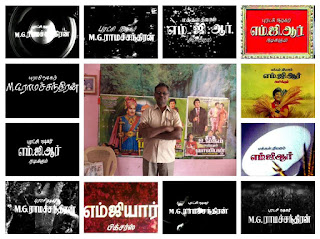 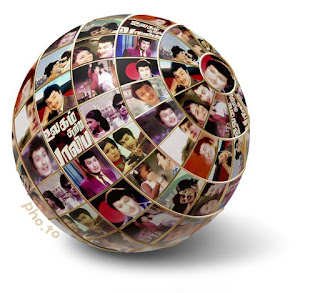 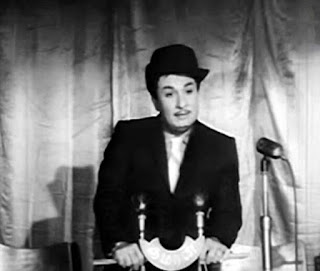 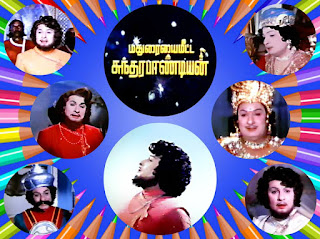 
Not only MGR fans, most of the world knows that MGR is the first person who always comes forward to provide a helping hand whenever the situation arises. We know many instances to quote. Most of his help are gone unnoticed. One such incident came to our notice couple of weeks back. 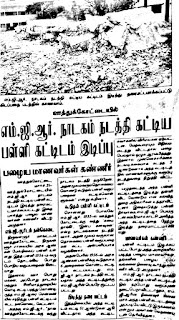 Recently Daily Thanthi paper published one article, that a school building was demolished in Uthukottai and the old students of the school shed tears. Article further states that the people visited MGR in 1954 for donation to construct new classrooms. MGR assured that he will conduct drama in Uthukottai and the collection can be used to construct new classrooms.

"What people hoped is a small donation but instead MGR has given more than what they expected".

As promised MGR came to Uthukottai in 1955 and staged two dramas and generously gifted his collection. By 1956, 6 new classrooms were constructed and they named it after MGR.

Now the building which is more than 60 years old and in dilapidated condition, the concerned authority demolished it and the old students remembered their memories with tinge of sadness to the Newspaper.