God grant that we shall never see
Our country slave to lust and greed;
God grant that here all men shall be
United by a common creed.
Here Freedom's Flag has held the sky
Unstained, untarnished from its birth;
Long may it wave to typify
The happiest people on the earth.
An Inspirational poem by American poet Edgar Albert Guest. 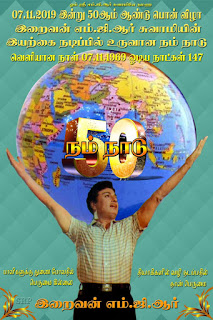 Yesterday 07.11.2019 is the 50th Year of Nam Nadu movie release. Produced by Vijaya International, this down to earth story, laced with the memorable role of our beloved Leader Puratchi Thalaivar MGR as Durai, the reformer, the messiah of the downtrodden, succeeding in removing corrupt politicians, power-hungry elites from the society. 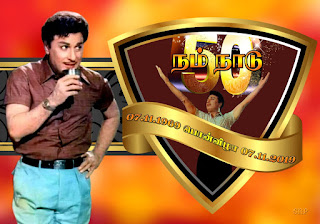 The image work for the golden jubilee done by MGR Devotee Venkat.

It was in the year 1984 I watched this movie in a theatre. But I was unfortunate that I missed the climax fight as there was no bus service after 10 pm. Later on, I watched this movie a couple of times the movie remained fresh every time I see. I wondered why MGR was not given the best actor award for this film?