MGR’s 100th movie and Gemini Studios first colour movie Olivilakku is re-released after a very long time in Chennai. The movie is re-released in two theaters from 28th September, the cinema halls are, as 4 shows in Anna theater and 3 shows in Mahalakshmi theater. 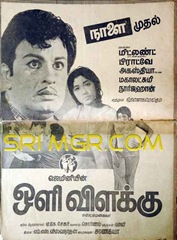 Today Matinee and Evening show are houseful in Mahalakshmi theater, by 5.30 pm the Houseful board was kept.

Evening show in Anna theater was housefull the videos and images from Anna theater will be uploaded soon through MGR Devotee Sathya.

The above release image was given by B.S.Raju, Editor Olikirathu Urimaikural. The news was forwarded by MGR Devotee Yukesh Babu.

After MGR was ousted from DMK on 10th October 1972, our beloved Leader Puratchi Thalaivar MGR floated a new party on 17th October 1972, after his one week hectic tour over Tamil Nadu.

The party faced the first Assembly election in 1977. During 1st March 1977, ADMK Party gave the below advice to the party members how to work in the forthcoming election.

The words published in the notice are true to its core. Mass support which MGR had and how he utilized to its full potential, the real power of Revolutionary Leader MGR.

Note how much positive words are to used to motivate MGR’s Blood Brothers, some are Victory is Ours and இப்படை தோற்கின் எப்படை வெல்லும் there is also a line about how lavishly the DMK party spends for the election.

Gemini Studios and our beloved Leader Puratchi Thalaivar MGR’s 100th movie Olivilakku re-released in two centres today as 4 shows in Anna and 3 shows in Mahalakshmi. The print in Mahalakshmi theater is worst and in Anna theater not bad.

MGR Devotee Venkat has informed me that nearly 270 people watched the Matinee show in Anna theater and 550 plus in Mahalakshmi theater. 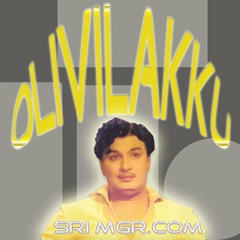 One of MGR’s super hit movie Devar Films Thaiyai Katha Thanaiyan was telecasted in Vasanth TV today. The print was not bad with lot of cuts and they had also cut short fight scenes, all fight scenes lasted for one minute.

MGR character name is Sekar. Below are some of the image clips from the movie Thaiyai Katha Thanaiyan.

Above images are the scenes were MGR gets hurt during the hunting trip and was helped by Sarojadevi. Interesting dialogue scenes are present one such is:

MGR Fans will get offended if the same dialogue is spoken by someone, here Sarojadevi as a village girl, utters this dialogues with absolute innocence. And MGR’s reaction resembles the same.

The other images are from the song “Katti Thangam”

The above images are from the dramatic scene of MGR’s mother, acted by Kannamba dislikes Sarojadevi first and then she changes her mind after understanding the facts and true nature of the heroine.

The above image clips are from the song “Moodi Thirantha” a lovely duet song with lot of close up scenes, we get captivated by the charm of MGR and Sarojadevi.

The other image the scene from village carnival were MGR’s villain Asokan along with Devar tries to kill MGR in Silambu fight (the fight was edited and shown for one minute)  and M.R.Radha congratulates MGR on his victory over Devar and Asokan.

We have already uploaded the images and one video, here is another video from Neerum Nerupum. 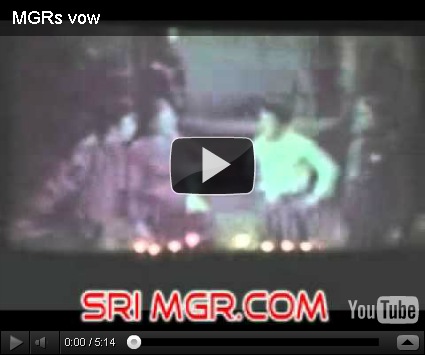 The above is meeting of two characters that MGR portrayed in the movie. Watch the difference in two characters, the roughness and domineering Karikalan character. 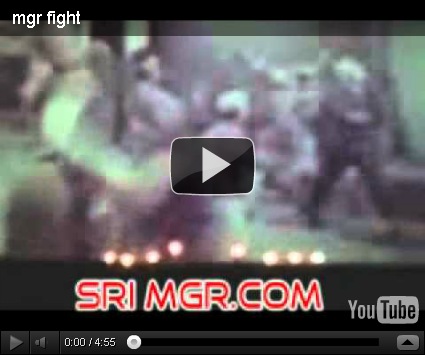 Above video is the fight scene that takes place in two forts. Watch the left hand swash buckling of MGR.

Other videos will be posted soon.

MGR’s 100th movie Olivilakku which was re-released previous week as 4 shows in Coimbatore Royal theater created another milestone of reaching successive second week. The overall collection for the first week is Rs.1,20,000.

MGR Devotee Tirupur Ravichandran has informed me about the collection and the ad given in Maalai Malar Coimbatore Edition. 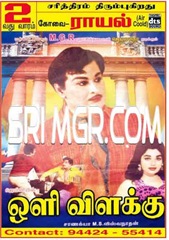 Special mention about this movie is the first song “Acham Enbathu” which MGR have mentioned in an interview that whenever he feels down he listens to this song. 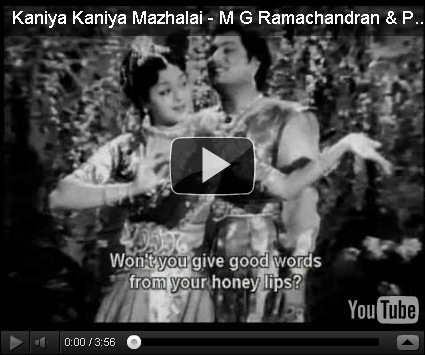 MGR Dual action movie Neerum Nerupum was re-released three weeks back in Broadway theater. As usual MGR Devotee Sathya captured many images and videos to share in our MGR Blog.

Below is the introduction scene of two characters MGR portrayed. And also watch how much MGR Fans enjoy and welcomes both the characters. 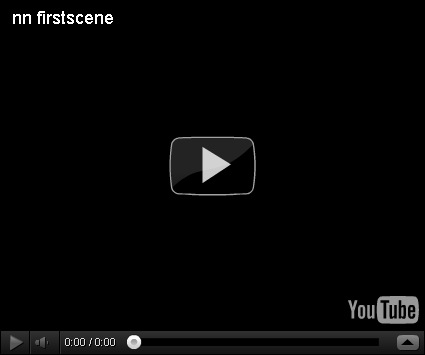 The scene follows with the song Kadavul Vazhthu Padum. Look how MGR rotates the sword very slow, 360 degrees rotation without any jerk appears that the sword is rotated by machine.

Other videos will be uploaded soon.

Sathya Movies Ithayakani was re-released previous week in Mahalakshmi theater. MGR Devotee Sathya have captured some images and videos to share in our MGR Blog. We have already uploaded the MGR Devotee celebration video.

The above images is from the song, Neenga Nalla Irukanum.

The above images are also from the same song, you can say that the print is not that good.

Other videos from Ithayakani will be uploaded soon.

Below link is the MGR Devotees celebrating re-release of Ithayakani.

MGR Devotee Sathya captured images and videos to share in our MGR Blog. We have already uploaded some of the images from the movie Neerum Nerupum. Below are remaining images.

MGR disguises as Charioteer and helps Jayalalitha escape from the clutches of Asokan.

The duet song “Malai Nera Thendral” and the last duet song of MGR and Jayalalitha pair for a period film.

MGR Devotee Tirupur Ravichandran on his official visit to Coimbatore have captured some images from Royal Theater for the re release of MGR’s 100th movie Olivilakku. 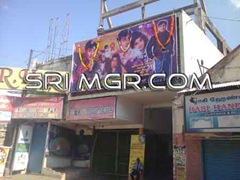 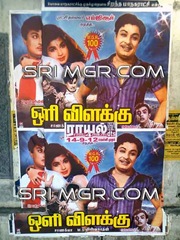 The above image is the poster fixed near Royal theater for the movie Olivilakku. 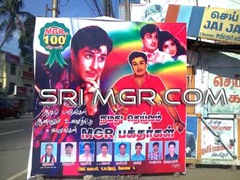 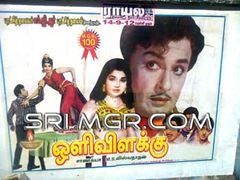 Above is an another poster of Olivilakku. 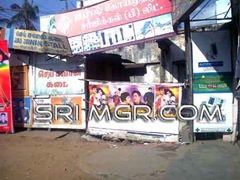 Another poster for the movie. 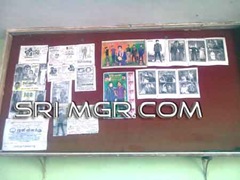 Paper cuttings fixed by MGR Fans for the movie Olivilakku.

We srimgr.com team thanks Tirupur Ravichandran for sharing the images of re release of Olivilakku movie in our MGR Blog. 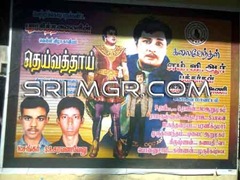 This poster is for the re release of Deviathai for the previous week release.

MGR Devotee Sathya captured some images and videos to share in our MGR Blog. Below is the video of MGR Devotees celebrating the movie release.

This video is taken on 9th September 2012 Sunday evening show. 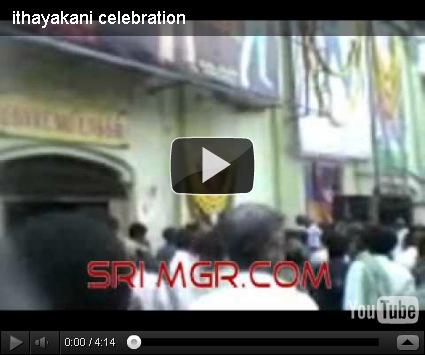 Email ThisBlogThis!Share to TwitterShare to FacebookShare to Pinterest
Labels: ithayakani

MGR character name is Rangan who is good hearted and faithful servant of Village head and also the Chairman, Thangavelu. Rangan understands that his Master is corrupt and acquires money through social service. MGR stands against his master and subsequently MGR was out casted from his master’s house.

Pankajam a classical dancer saves MGR and she gives the knowledge about the world. She falls in love with MGR.

Rangan becomes a local hero the villagers gives him respect. MGR meets his love (Latha) and marries her.

People turn against the Village head and they send petition to the higher officials, and the village head loses his post and grudges against MGR and Thangavelu plans to kill him during a Deer horn fight.

MGR does the deer horn fight with perfect timing (his age was 59! at that time, unbelievable stunts)

Finally MGR escapes from the prison and fights against his enemies and saves Thangavelu’s son. Thangavelu changes his mind and ask MGR to take care his son.

Only two songs are good and unfortunately KTV has deleted the Nalai Ulagai song due to the appearance of ADMK flag. Most of the scenes MGR appears with Two Leaves symbol embed stick, but they showed it clearly.

In Coimbatore from yesterday onwards MGR’s 100th movie Olivilakku is being re-released in Royal Theater as 4 shows.

MGR Devotees Yukesh Babu and Tirupur Ravichandran has informed me about the movie re-release and the ad given in Maalai Malar.

This same movie has not been released for more than five years in Chennai.

A.V.M.Murugan son of A.V.Meiyappa Chettiar passed away yesterday due to heart attack.

Below is the image forwarded by Tirupur Ravichandran, in the image A.V.M.Murugan seen along with his sibling for the movie of Anbay Vaa with Hero MGR and Nagesh. 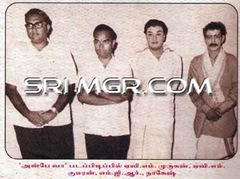 srimgr.com team offers its heartfelt condolences to the family and also prays for his soul to rest in peace.

Email ThisBlogThis!Share to TwitterShare to FacebookShare to Pinterest
Labels: avm 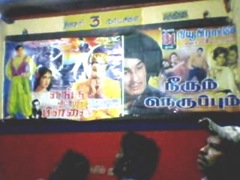 The poster fixed inside Broadway, to the left is Enga Veetu Pillai.

Above images are from Neerum Nerupum captured by MGR Devotee Sathya for sharing in our MGR Blog.

Above images is the romantic scene between MGR and Jayalalitha from the movie Neerum Nerupum.

Below image, reservation ad given for the release of Neerum Nerupum. The movie was first released on 18.10.1971.

Other images and videos will be uploaded soon.

This week two MGR movies is re-released in Chennai theaters. One is Sathya Movies Ithayakani, released in Mahalakshmi theater. Another movie Enga Veetu Pillai in Broadway.

All the three movies are colour. The images and videos of these movies will be updated soon in MGR Blog.

Most of advertisements of yester year Tamil Movies will be given in Tamil Dailies. Seldom the ads appear in English dailies. Below are some of the MGR movie ads that have appeared in English Dailies of those days. 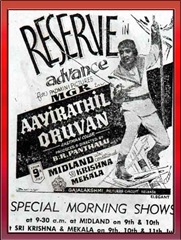 AVM Productions first colour movie Anbay Vaa and Padmini Pictures Ayirathil Oruvan were the above image ads that have appeared in English Newspapers. 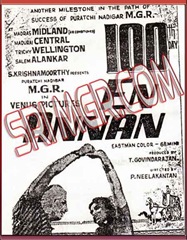 Mekala pictures Kanchi Thalaivan ad given in the newspaper, note that no mention of MGR’s name in the ad and a very small image of MGR compared to the close up image size of SSR. Devar Films Mugarasi like the above image there is no mention of our beloved Leader Puratchi Thalaivar MGR name but the importance of hero is given in the image, unlike the above ad. 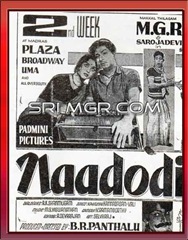 Padmini Pictures Nadodi this the 2nd week ad given in an English Daily. 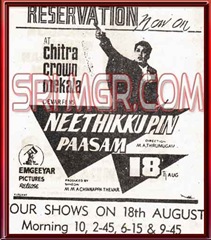 Devar Films Neethiku Pin Pasam the reservation ad given in the English Newspaper. 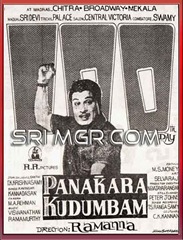 The above ad is the 100th day of Panakara Kudumbam. 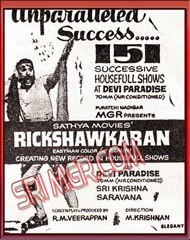 The above ad is about the 151 successive houseful shows in Devi Paradise, Chennai for the movie Rickshawkaran. 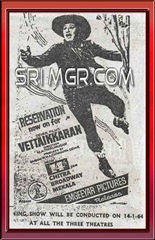 Some of the ads were from the collection from B.S.Raju, the Editor of Olikirathu Urimaikural.