Yesterday 29.5.2015 is the 44th Anniversary of release of our beloved Leader Puratchi Thalaivar MGR’s super hit movie Rickshawkaran. The movie was produced by Sathya movies, the first colour film from the production house and also this movie fetched the National Film Award for Best Actor to our beloved Leader MGR for the year 1971 , the first time for a Tamil movie actor (Bharat Award).

Story:
An Ex-service man Selvam (MGR) is a Rickshaw driver happens to see Manickam (Stunt Sankar) been murdered and burnt by Kailasam (Asokan) in daylight. Manickam is also one of the rickshaw drivers who is looking after motherless child. The accused Kailasam gets released by the clever defense lawyer and his relative Dharmaraj (Major Sundararajan). Selvam takes the child to the orphanage and appeals the case in the High Court. Meanwhile Dharmaraj was promoted as Judge. 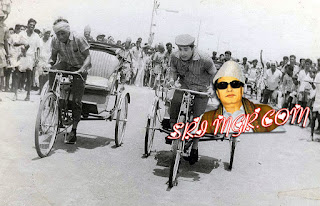 (MGR as Rickshawkaran races in the streets of the newly formed Anna Nagar, my father was very much fortunate who watched this shooting)

Another incident Uma (Manjula) a college girl on the brink of kidnapping was saved by Selvam but was punished in the Court because Uma does not come to court to prove his innocence.

Dharmaraj now a new man starts to worry about his behaviours and how he had lead his life. The flashback shows that he is a killer who has killed his wife Kamala (Sakunthala, Selvam’s sister) with the help of Kailasam when she had a baby girl. On her death she gave her baby to her friend Parvathi (Padmini) who is married to a rowdy Karmegam (R.S.Manohar) on his return from jail Karmegam mistakes she has given birth to a girl and tries to kill her. Parvathi escapes from Karmegam and lives lonely. She has to protect Uma from Dharmaraj and Kailasam and as well as she should live unnoticed from her husband Karmegam.

Parvathi lives by selling food to Rickshaw drivers. She knows that Selvam has saved Uma but she did not tell him anything about her past life. Meanwhile Selvam happens to see Uma and takes her to the Judge Dharmaraj house, there she comes to know about Selvam and she was asked by Dharmaraj to visit her often. 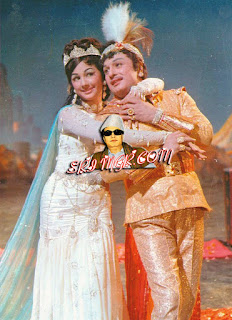 Kailasam who is the Chairman of the college does unlawful business of sending young girls to foreign countries illegally. And Uma is his target, he tries his best to kidnap her but Selvam was always present to guard her. Turn of events, Uma comes to know about her past life and also Selvam comes to know who is Parvathi and what had happened to his sister. Uma kills Dharmaraj at point blank range and she runs from the house, Selvam grabs her and hands over to police. 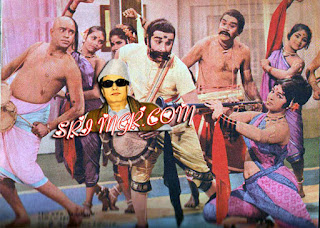 (MGR in disguise dancing for the tune of Pambai udukai song)

Selvam understands that the girl is dumb and feels that she is not real Uma. With the help of Police & Karmegam, Selvam enters the lair of Kailasam fights all his henchmen and finally releases the real Uma from the clutches of Kailasam.

The action scenes are very different for this movie. MGR performed his stunts by driving the rickshaw and fighting with the goons. And not only that he also performed silambam from the rickshaw during the fight. The climax fight with Justin will give us goose bumps followed by fight using surl pattai. We will be in the edge of the seat during the climax of the film. 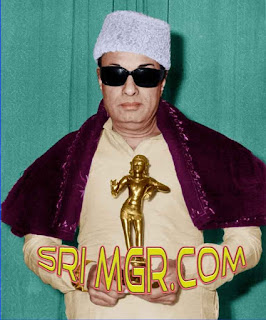 MGR with the Bharat award

The way of rickshaw driver’s thinking towards the society and uplift of poor, an ex serviceman doing service to the people is new type of story telling which gained him the best actor award. 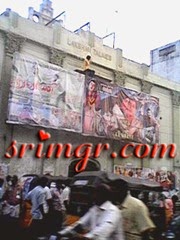 Recently Mahalakshmi theatre was renovated with Qube system and DTS and they showed mostly new movies.

The posters for Enga Veetu Pillai mentioned as Qube format. But the movie is not digital.

The print is worst with lot of cuts but the audio is satisfactory. Around 800 people came to watch the evening show of our Puratchi Thalaivar MGR starrer dual action movie Enga Veetu Pillai.

K.P.Ramakrishnan who had acted with our beloved Leader MGR in many movies and he is also one of the five bodyguards of MGR. His son Govindaraj is a sub editor in Agni Malargal magazine. In that magazine he writes articles about Puratchi Thalaivar MGR. 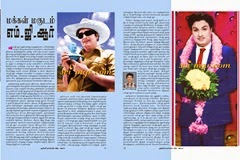 From K.P.Ramakrishnan’s account Govindaraj narrates in the magazine, one such is given below which had appeared in May 2014 issue. 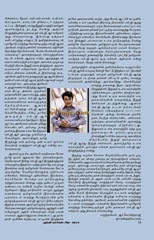 In the above article he mentions how MGR fans were motivated in their life and some instances from MGR’s benevolence.

MGR’s bodyguard K.P.Ramakrishnan’s son Mr.Govindaraj has written an article about the uniqueness of our Puratchi Thalaivar in Agni Malargal December 2014 issue. 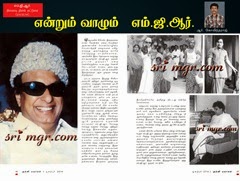 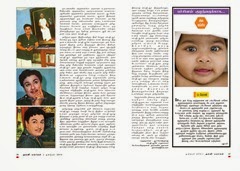 Also included in the download is colour photos of our beloved Leader MGR. 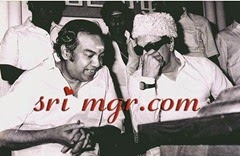 The article is published in May 2014. K.P.Ramakrishnan son Govindaraj, who is also the sub editor of that magazine, has asked me to share this information in our MGR blog.

Page 1 and Page 2, click the below images to read the article. 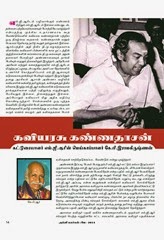 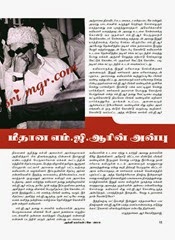 This is the continuation to the post of costumes used by our beloved Leader Puratchi Thalaivar MGR in his movies. In this fourth instalment we have uploaded the costumes/dresses from the movie Ragasiya Police 115.

All the costumes are screen captured and given in 4 film rolls. The list follows.

1. First shot of the movie MGR as Secret Agent escaping from the enemy territory, cladded in Trench coat.

3. MGR in Trench coat enquiring for a room in the hotel. Removes the trench coat in conversation with Ramarao (Manager)

4. In his room MGR in light grey suit.

5. Fights with Justin some of the scenes where shot in 1966 and some in 1967, MGR in light brown shirt and dark brown pant.

6. Next day, MGR coming out of shower with pink coloured bathrobe (some of the shots were from 1966).

8. Next dress worn by MGR is light brown shirt (not the same dress used in the fight scene with Justin) and light brown pant.

14. Continued in the same duet MGR in single-breasted white suit (used in meeting K.D.Santhanam scene) difference is the tie colour this time it is blue tie.

16. Same costume used by MGR in the first scene for meeting with Police official, difference is red tie.

17. MGR comes to know the news about his blind mother goes to the hospital wearing a light brown shirt and grey pant.

19. A scene, MGR asking Nirmala about her back ground, MGR in white shirt and sparkling red colour pant.

21. MGR in old man disguise wears a black coat, blue shirt and a dhoti (on closer inspection the coat is dark blue and striped)

23. Movie climax MGR in navy blue jacket & pant wearing dark green shirt and red tie. The jacket is modified for MGR, the buttons in the jacket are small sized bombs.

For the original size of the above images click the link below: