Time flies so fast. I can’t believe that our beloved Leader Puratchi Thalaivar MGR had breathed his last 30 years back. Remembering the God of the Poor, it was early morning when my brother broke the news that MGR had died. 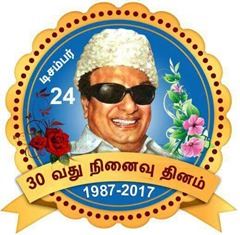 I came out to see how the people are taking up the news. There is no vehicle plying over the highway my father was getting ready for morning shift (as he was a Government servant) I looked at my neighbor who was a staunch Puratchi Thalaivar fan. He was dumbstruck and speechless for several minutes that is all I saw. Outside some of the miscreants started to throw stones and ransacked the shops nearby. You may think what I was feeling? no I did not have any sadness because I was not a MGR fan those days. Now I think it was God’s will if I was MGR fan then, I might had lost my senses.

Sri MGR.com team always remembers him for his service to humanity, we miss him and always feel he will be back one day.

In Tamil Cinema, science fiction movies are seldom tried. 2 generations back talking about science fiction based stories are termed nerdy, and our way of living those days saw movies based on the day to day life of a simpleton. And the film technology was in nascent stage, never able to compete with standards set by Hollywood. 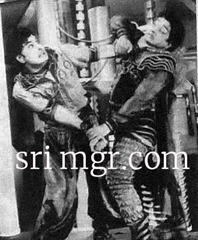 But they tried. Many of MGR fans had the information that our Puratchi Thalaivar movie was first to try such a theme. In 1963, Kalai Arasi was released. MGR acted in dual role one an Earth man and another an alien. The movie has many technical shots and breathtaking miniatures effects.

In Daily Thanthi yesterday paper they have written an article about a new movie starring Jayam Ravi titled Tik Tik Tik, a science fiction space thriller that is going to be released soon. In that article the writer has mentioned that Jayam Ravi movie is not the first of its kind as earlier a MGR movie had space theme in Kalai Arasi. The full article is given below, click the below image to expand.