SOME OF THE MOVIES NAME WHICH MGR SIGNED TO ACT BUT NOT HAPPENED. THIS NEWS CAME IN TAMIL DAILY'S DURING 1970 -1976.
1 .GANGAIYILIRUNDHU KREMLIN VARAI- INDO-RUSSIA COLLABORATION.
LEADING.... MGR..LATHA ETC

AS PER PAPER AD MOST OF THE MOVIES SHOOTING CARRIED FOR FEW SCHEDULE. SOME MOVIE STILLS ALSO PUBLISHED IN THE DAILIES AND MAGAZINES.
IN 1978 WHEN MGR DECIDE TO ACT " UNNAI VIDAMATTEN" BUT NOT HAPPENED DUE TO LEGAL DISPUTES. BEFORE THAT NEARLY ABOUT 10 TOP PRODUCERS PLAN TO BOOK MGR FOLLOWED BY UNNAI VIDAMATTEN.
1, SATHYA MOVIES.
2.JAYANTHI FILMS
3.CHITHRALAYA
4.DEVAR FILMS
5.VALLI FILMS
6.RR PICTURES
7.KC FILMS
8.JAYAAR MOVIES
9.VENUS PICTURES
10.UMAIYAMBIGAI PRODUCTIONS

TWO MOVIES BEFORE THIS PERIOD ARE

BUT IT IS UNFORTUNATE TO THE MGR FANS. IF MGR CONTINUED TO ACT MEANS WE WERE LUCKY TO WATCH THE ABOVE SAID MGR FILMS.
Posted by Roop No comments:

A Day with Chief Minister MGR


Magazine name is unknown, the article was three part, I got only two parts. A day with Chief Minister MGR begins in the early hours of 11th December 1977. The reporters arrived at his Ramavaram residence and came to know that Chief Minister MGR was ready to meet them and that he had got up from the bed by 4.30 am for the preparation of the report and after that he his now doing exercises.


By 8 am MGR begins his day by conversing with his party members and his fans. He questioned them that how well the Government plan is progressing in the rain affected area. (Most of the Chief Ministers will ask the Collector or the Officials of the concerned region, but not the people who is suffering, this is one method of getting the real news from the public , this happened in 11.12.1977 that is 4 month old in office as Chief Minister of Tamil Nadu - MGR was always thinking about the people, this is one reason why MGR is still number 1 Chief Minister of Tamil Nadu)


The article comes in 11 pages I have provided first 5 pages for you.

Thanks to Mr.Venkatesan who provided this papers to share in our blog.

Will continue.
Posted by Roop No comments:

It is common knowledge that MGR is known for his humanism. He extended his magnanimity to his friends and artistes who had fallen into bad times. So, one may not be greatly surprised by his gesture towards Kalaivanar's family after his death. But theirs was a unique relationship surpassing the physical and temporal.

MGR undertook to educate Nallathambi, son of Kalaivanar. MGR is said to have advised Nallathambi that his father (NSK) earned in crores and paid taxes in crores, but ultimately left nothing for his family. So it is only education that can be inseparable from one. Following his words Nallathambi went on to become a successful engineer later on.

MGR continued to give financial support every month and whenever there was a pressing need.

When Mathura Bhavanam, constructed by Kalaivanar in the year 1941, was auctioned due to unpaid debts, MGR stepped into the scene. He recovered the property with his own money and handed it over to the family, who still have possession of the house.

MGR also had great respect and regard for Kalaivanar. In 1977 MGR became the chief minister of Tamil Nadu. On Kalaivanar's death anniversary function in 1978, MGR said that Kalaivanar had contributed a lot towards society. He made special mention of the fact that it was Kalaivanar who had taught him the subtilties of politics when he was just 17. He said that it was unfortunate that Kalaivanar was no more. For, if he had been alive, Kalaivanar would have been the Chief Minister and he (MGR) would have served him.

I thank Mathuram Nallathambi who consented to publish the words from his website.

This was taken from Daily Thanthi Chennai Edition. 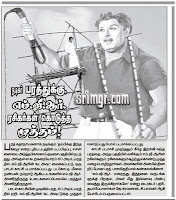 Actor Bharath new movie Thambiku Intha Oru. (தம்பிக்கு இந்த ஊரு). This 80 feet Mega Cut out was erected for the movie shooting. Bharath acts as MGR Fan in this movie. Englarge the image to read.
Posted by Roop No comments:

From 1978 to till date every year MGR acted movies are re-released frequently than any other actors movies. Is this is a myth (false run as mentioned by someone in the Net).

Here are some of the movie rates for the re-release, these rates are quoted by the Meeran Sahib Street Film Distributors, Chennai-2. Some of the rates quoted by the officials from AVM Productions, Diamond Pictures, Divya Films, SV Films, Anand Pictures, Shoukathbai and Good luck movies.

Regular show means 3 shows per day. Movie Rent inclusive of Print and posters for one week.

For the 3 Emgeeyar Pictures movies the rent is in Lakhs.

Here is the myth buster why MGR movie is a Gold Mine.

Theater rent for One week:

Abirami – 50% of the collection

These are the theatres were MGR movies are released frequently. The rent for film print is low but the rent for the theater is higher. Many movies were not re-released because of this factor of high theater rent. And the those who come to theater are people belonging to B and C category. This is the main reason why MGR movies are still going strong.

115 of MGR Movies (as Hero) all of them were running in theaters from 1977 to 1987, at present out of 115 movies 107 movies are screened all over Tamil Nadu, but some 30 films negative were lost and they have only print.

Here are some videos for myth buster. 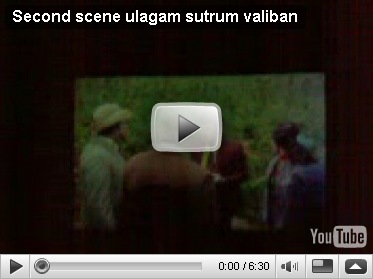 This is from Natraj Theater for the movie Ithayakani. 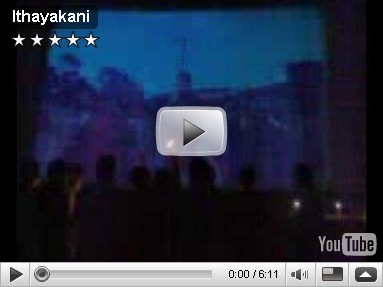 MGR is the Emperor in Collection for Re-release movies. 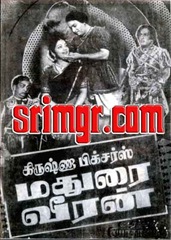 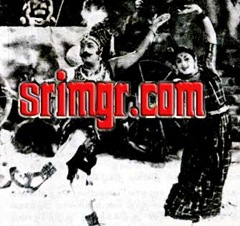 The movie was released in 136 centres in 1 year including North and South India and overseas.

The first Tamil picture and first MGR movie to collect 1 Crore 5 lakhs in his first release. Total number of people watched this movie is 3 Crores and 40 lakhs, highest in India for any language movie at that time. 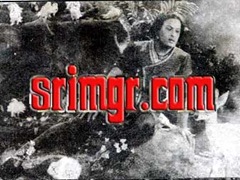 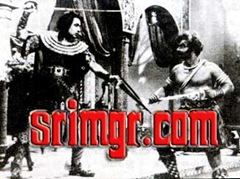 First Tamil and first MGR movie to cross 100 days in 40 theatres the record was unbeaten till 1996 by a colour movie. Even Emgeeyar Pictures Nadodi Mannan, Adimai Penn and Ulagam Sutrum Valiban, sister concern Sathya Movies – Deiva Thai, Kavalkaran, Rickshawkaran and Ithayakani did not beat this 100 days in 40 centres for the first release mega record created by MGR's Madurai Veeran. Black and White Madurai Veeran movie still holds the mega record of 100 days in 40 centres unbeaten till date. The movie was released 53 years back.

First Tamil and first MGR movie to cross 200 days in Madurai Central theater the capacity was 1800. 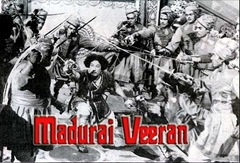 MGR acted Madurai Veeran is the only movie successfully completed 150 days in all theatres in Madurai, Trichy, Salem, Coimbatore, Kanchipuram and Vellore. 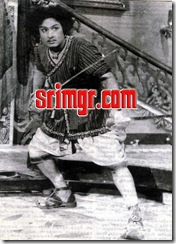 The very first time Tamil and MGR movie to cross 100 days in all 4 centres in Chennai they are Chitra, Prabath, Kamadhenu and Saraswathy. 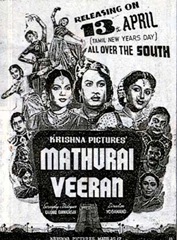 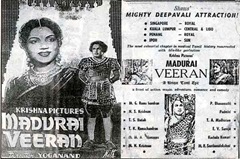 The movie collection was good and the response also good despite of Anbay Vaa was telecasted two weeks back in KTV satellite channel.

MGR Fan Murugan Dharmalingam forwarded this paper cut to me on 28th February 2009. This was taken from Dinamalar a Tamil daily.

Delhi Ganesh narrates how MGR touched him even though he was Hardcore Nadigarthilagam fan. Enlarge the picture to read.

Previous week I was not able to watch the Rasigan program telecasted in Kalaingar T.V. This program is one were various Actors fans participate. This week the continuation of MGR Fans program. The program was conducted with help of Anaithulaga MGR Pothunala Mandram. Various MGR organizations participated including Kalaiventhan MGR Bakthargal and Ponmanachemmal Sri MGR Bakthargal. The Fans were around 100, out of these 25 of them are in the age group of 30 (most of them born after MGR became the Chief Minister) and 40 members around the age group of 40.

9th day of February 2009 time 9 pm I was giving finishing touches to the post Rare images of MGR for our blog. At that time some one named Kamal entered MGR Chat room and asked me to provide information, how MGR will begin his speech. I said it in one line but he asked me to give it in detail. The time was running out for me for the post that I promised to put it online.

With dinner calling I started to search for and got MGR’s speech CD paused the prelude of his speech and noted it down. After my dinner I sent the copy of MGR’s speech to him. He gave email reply. His full name Kamalakannan Narasimhan, his wife name Ponmozhi Kamalakannan, he was blessed with twins one Anbarasan.K (studying L.K.G.) and Mahalakshmi.K. His school Vishwa Bharathi Matric Hr.Sec. School, Velachery. Why he asked for MGR speech because his son is taking part in Fancy dress competition. He has chosen to wear the dress of MGR with fur cap and dark glasses and he has to give a small speech like MGR before the audience. 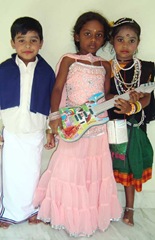 I forgot the whole program, yesterday I received email from him with attachment. He has sent 5 photos of his son and daughter, the function and the school to publish in our Blog.

Most of the fancy dress competition children dress like National leaders - Mahatma Gandhi, Jawaharlal Lal Nehru. If girl Jhansi Rani etc. See for yourselves what they have dressed like. Mahakavi Bharathiyar, Subash Chandra Bose, Swami Vivekanda and new addition MGR. 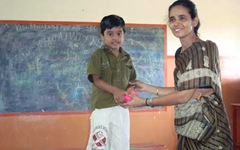 His father told me on that day Anbarasan was suffering from cold and he was not able to deliver MGR speech properly. But he got the participation prize.

I thank Kamalakannan who allowed me to publish the photos in this blog.