The Golden Jubilee Function is nearing, only 17 days left. We were busy contacting people for the function.
MGR Fan (MGR Devotee) Mr.Sailesh Basu who is working in UAE often comments in our blog and the 7th person to join our MGR community. He was the first person to respond when we announced The Golden Jubilee Celebration done by MGR Fans. (This will make an individual post).

Below is the image forwarded by Salem MGR Fans for the movie Adimai Penn.

MGR is a multifaceted person. He was mainly projected by everybody as a mere Tamil movie Actor, who successfully entered Politics and ruled Tamil Nadu for 11 years (1977 to 1987).
A new blog titled mgrliterature will publish the literary works of MGR, which seldom appeared in Newspapers and books.
I have already provided the Literary works of MGR as MGR Book. MGR Literature blog is entirely dedicated to the literary works of MGR alone.
The literary works include not only writings of MGR, also his speeches (not political) in Schools, colleges and Universities, Functions, Question and Answers, Essays which projects intellectual, cultured, artistic, creative, cultivated reading habits, well informed and knowledgeable personality.
Click here
Posted by Roop No comments:

Email ThisBlogThis!Share to TwitterShare to FacebookShare to Pinterest
Labels: literary

This ad was placed in Daily Thanthi Coimbatore edition. It is uncommon to place ads in leading Newspaper for a Black and white movie. MGR leads in this department too.
The link was forwarded by MGR Devotee Yukesh Babu.
Posted by Roop No comments:

This was the poem written by Vaali when MGR received the National Best Actor Award (Bharath Award) for the movie Rickshawkaran.

Child Artist of MGR and Sivaji Ganesan movies Vichu who acted in "Enga Mama", "Nan En Piranthan" and "Neethiku Thalai Vanangu". He says about MGR's characterstics in shooting.
MGR will be calm in the set and asks me to perform well in my scenes.
During the shooting of "Neethiku Thalai Vanangu" that day I got my 10th result and was giving sweets to everyone in the set. MGR asked me what this is for and I told that I have passed in 10th Exam. Shortly MGR ordered sweets to everyone with his own money and he treated my success in grand manner. He always give respect to educated people. The function was unforgettable day in my life.
Vichu acted in Pithamagan and E, the latest is Singam Puli.
Posted by Roop No comments:

Email ThisBlogThis!Share to TwitterShare to FacebookShare to Pinterest
Labels: dinamani 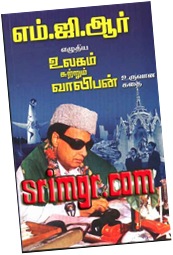 I was searching this article for several years because this is the only literary work completed by MGR. All other works such as his Biography நான் ஏன் பிறந்தேன்?, என் காதலி etc were unfinished due to several reasons to name one is, after the party formation in 1972. 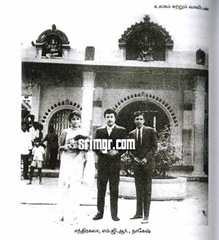 This book contains about 14 chapters it starts from getting permission from the Indian Government and how they procrastinated. 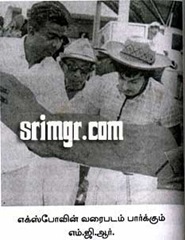 MGR narrates about how many of his fans were waiting near the Airport and the same when the plane takes off that he saw only the crowd beneath. Apart from MGR Fans the people who came to wish his success are N.T.Ramarao, Director Krishnan Panju, Actors Srikanth and Gemini Ganesan, Director and Producer Banthalu and also the Chief Minister of Tamilnadu Karunanidhi. 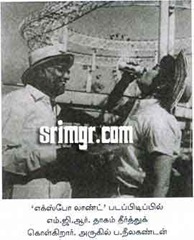 In the second chapter MGR tells about the outline of the story real life characters of his Heroines from Chandrakala, Manjula and Latha. And also he tells us how much responsibility he has in take care the whole crew which appears a Himalayan task at that time.

We will come to know about the hilarity of Nagesh and Asokan in Plane. How many airplanes they changed to reach Osaka for Expo 70. 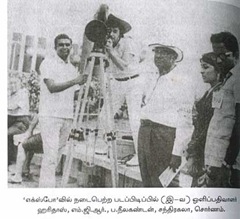 The first shot in Expo 70 was taken on 8.9.1970 and the next day is the “Ulagam azhagu” song was shot he explains how the shot was done and how many hours the crew spent in taking that particular first stanza of the song. 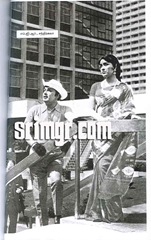 MGR also mentions the part played by Director P.Neelakandan in filming Ulagam Sutrum Valiban and MGR highlights the one take of MGR, Chandrakala, Nagesh, Asokan and MGR, Manjula in Expo 70 and he describes the situation how other actors co-operated.

The book ends with Hong Kong shots and how a Indian helped MGR in making the song and scenes in his own house.

The book has several unseen images, deleted scenes from Ulagam Sutrum Valiban, behind the scenes. I have upload some of the images for you.

A special mention is about the writing skill of MGR I have read some of his literary works in every work his writing skill is like conversing with us and not just a write up. This book is no different. When we read a chapter in some places our mind will ask a question, that question will be in the next sentence and when MGR explains that question some times we find a doubt and that same doubt will be in next line. It appears that we are not reading the book, it is like MGR talking to us. 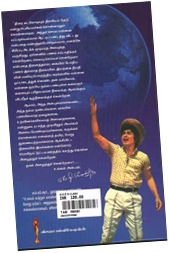 All MGR fans should buy this book. The cost of the book is Rs.120/- sold in Major Book Stalls.