Sri Bala Murugan Films Thazhampoo movie was released on 23rd October 1965. This 23rd is the Golden jubilee year. Thazhampoo is a black and white movie, which had a 50 days run.

MGR character name is Durairajan, but only called as Durai in the entire movie. K.R.Vijaya is the heroine, Nambiyar and M.R.Radha were the movie villains. Story is by Kottarakara, screenplay by G.Balasubramaniam and dialogs by Aroordass. Music is composed by K.V.Mahadevan and lyrics by Kannadasan, Vali, Alangudi Somu and Trichy Thiyagarajan.

The real graduation scene of MGR is merged with the background, the above image is created using photoshop.

As part of the work for 50th year of Thazhampoo movie release, I happened to see a screen shot showing list of theatres surprisingly most of the movies shown are of 1965. Some movie titles are clearly visibly they are: 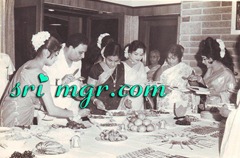 She has the distinction to have acted with five Chief Ministers, with Peraringnar Anna and Karunanidhi in drama, MGR, Jayalalitha and N.T.Ramarao in films.

Her memorable movies with MGR which had occupied screen space with him are less, they are as an quarrelling wife of Nagesh in Chandrodhayam, fisherwoman in Padagotti and as a spy of Narasimha Pallavan in Kanchi Thalaivan.

We all know that our Puratchi Thalaivar MGR showed the kindness, gentleness and warmth to fellow humans. There are lot of incidences that we can publish about this unique trait of our MGR.

The word Humanitarian is synonymous to MGR, above is an article from a Tamil evening daily, Makkal Kural issue dated 23.12.2012 which narrates MGR’s kindness to a wounded DMK volunteer. If any unfortunate events occur the present leaders turns as mere witnesses or in other words they just sit and watch.

The article is forwarded by R.Govindaraj (his father K.P.Ramakrishnan, one of MGR’s bodyguard) to share in our MGR blog.

Couple of years back we have been witnessing mimicry shows from Vijay TV and other TV channels, in the name of mimicry they make fun of yesteryear actors, that also includes our beloved Leader Purtachi Thalaivar MGR. The comedy in that comedy programme is that the most talented mimicry artist can only re create the post 1967 voice of MGR. Nobody so far re created the original voice of pre 1967 MGR. If they had so much talent why can’t they reproduce pre 1967 voice of MGR?

MGR devotees and fans protested against such shows, recently MGR devotees condemned it in person by visiting the TV channel and gave a letter to the administration. On acceptance the admins told that hereafter they will be careful in the show. But later the mocking continued.

R.Govindaraj, son of K.P.Ramakrishnan (one of MGR’s bodyguard) has written an article regarding this in Puthiya Paravai, Tamil magazine, issue dated 15.12.2010. He had given an instance of how MGR reacted when his own brother’s son (M.G.Chakrapani’s son) M.G.C.Balu mimicked Chidambaram S.Jayaraman voice for one of MGR’s song from Urimaikural movie. Below is the article. 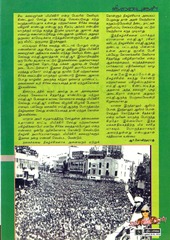