We have already uploaded the 190th day experience of Ayirathil Oruvan restored movie in Baby Albert theatre. In this post we will uploading the our Puratchi Thalaivar MGR philosophical song “Yen Endra Kelvi”.

The song situation is the people get frustrated of their slavery and they want to know why they get this treatment and why they have to work for him. All their questions and drudgery are answered by this song.

Click the play button the song will open in new window.

I noticed during the song when MGR utters the word “unarchigal “ (feelings) his throat nerves swells prominently and gives us the impression that MGR is singing the song from his heart.

The above two images shows the response from the crowd, someone in front of me stood and raised his hand in unison with our MGR on screen.

Compilation of real stories of men and women who had achieved the pinnacle of success through their hard work and dedication, their raise from ordinary to extra ordinary were featured in a program titled Thadam Pathithavargal, telecasted in Vendhar TV.

The first to be featured in the list is our beloved Leader Puratchi Thalaivar MGR. Given here is the promo from Vendhar TV.

Below is the first episode of Thadam Pathithavargal with screen legends. Do not miss one of the best intros given to our Thalaivar, undiminished moon and never setting sun.

In the above video they have given some information from movies such as Malai Kallan, Marma Yogi, En Thangai and Madurai Veeran and how MGR used medium to reach the mass.

A fitness trainer from Coimbatore Sukumaran met M.G.Ramachandran for the last time 29 years ago, his memories of the movie star turned politician are vivid. MGR was keen on being fit and encouraged Sukumaran to start a fitness centre. Whenever they met at Circuit House in Coimbatore, MGR spoke of the importance of good health.

A passing mention of MGR gets Sukumaran excited. According to him, MGR has no parallel in the political world and his philanthropy has no substitute. His adoration of MGR is very much visible in his house, office, fitness centre and even in his car.

Old photographs of him with MGR are displayed on the front and back of his car. A board that sits atop his car says his gym was started with the blessings of MGR.

His house and gym have virtually turned into MGR museums and photos of the charismatic politician adorn the walls. I have a two-wheeler and that also has a rare photo of MGR,'' says Sukumaran. His visiting card carries a black and white photograph in which MGR shakes his hand.

It was actor 'Philevan' Ranganathan who introduced me to MGR when I was just 20 years old. Ranganathan was the fitness advisor of MGR and they shared a rare camaraderie. As I was trained under Ranganathan, it was easy for me to approach MGR.

According to him, MGR was totally against consumption of liquor and tobacco. He wanted all of us to convince youngsters against using intoxicants. On one occasion he gave a written statement urging people to keep fit, which Sukumaran has displayed in his health centre.

The above article appeared in Times of India dated 18th January 2012.

Many years back we conducted a poll in our MGR blog, asking the readers to choose which villain is best suited for MGR movies. Most of them selected Nambiyar and S.A.Asokan secured second place. Today we will be posting about our beloved Leader Puratchi Thalaivar MGR and Asokan combination.

Asokan got an opportunity to act along with MGR in Baghdad Thirudan (1960) as one of the Hench men of main villain and the last movie with MGR is Ninaithathai Mudipavan (1975) as a Police Officer. He also produced one MGR movie Amalraj Pictures “Netru Indru Naalai” and acted as a Villain. 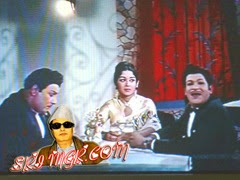 In the above image JB (MGR) and Geetha (Sarojadevi) shocked by Sekar’s (Asokan) withdrawing from marriage and congratulates JB as he is the luckiest person in the World in Anbay Vaa (1966).

Most of the movies Asokan portrayed in negative role, sometimes he acts as MGR’s elder brother in couple of movies, even though he acted as a lawyer and good character he will be opposing MGR as in Neethiku Pin Pasam. 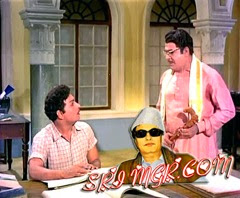 In the above image Durai (MGR) enquires about Alavandhar’s (Asokan) visit to Municipal office in Nam Nadu (1969).

Asokan’s memorable roles as Villain to MGR and still remembered by MGR fans are:

Kailasam in Rickshawkaran, he does not get a single punch from MGR though Asokan was the baddy in the entire movie. 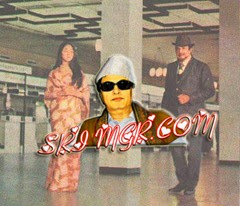 In the above image Professor Bhairavan (Asokan) comes out of the airport with Vimala (Manjula) in Ulagam Sutrum Valiban (1973).

His other supporting character roles in MGR movies that are worth mentioning are:

Asokan acted as elder brother to MGR in many movies, his facial expression and tone when he calls MGR as “Thambi” (brother) looks like a real brother calling, such emotional scenes can be watched in Thazhampoo, Neethiku Pin Pasam, Thaiku Thalai Magan.

A scene from Ulagam Sutrum Vaaliban, watch from 13.40 onwards one of the best scene for MGR and Asokan combination, starts from Kamakura Buddha Temple in Japan to hide out of Professor Bhairavan.

MGR’s body guard K.P.Ramakrishnan has worked as a stunt double to MGR and Nambiyar in many movies. His son Govindaraj has forwarded two articles which he had written in Agni Malargal magazine, to our MGR Blog srimgr.com.

The first article was published in February 2014 and the second article this month.

MGR the Mass Miracle article given below. He has written the topic with touching some part of the psychology MGR used. He has given much information on how much he cared for the people who come to see his movies. 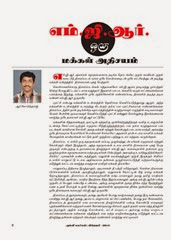 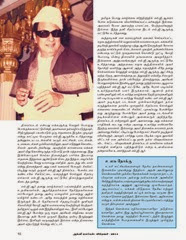 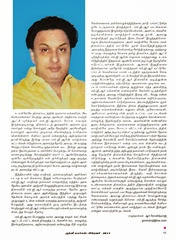 Second article: MGR One in a Thousand 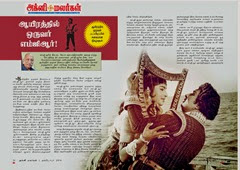 Govindaraj had written with the help of his Father K.P.Ramakrishnan and he had explained in detail some of the stunt scenes, how MGR gave an opportunity for K.P.Ramakrishnan to act in the movie with dialogues. K.P.Ramakrishnan had praised MGR and Nambiyar as they are well versed and had much more experience than the professional stunt artist. 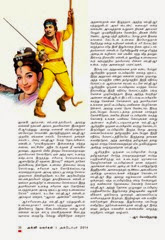 In the above page he had explained why MGR did not participated in Anti Hindi agitation of 1965. He has also wrote about the benevolence of MGR during the shooting of Ayirathil Oruvan.

Vendhar TV is going to telecast a new program titled “Thadam Pathithavargal”. The program is an effort to present the stories of men and women who had achieved the pinnacle of success, their raise from ordinary to the extraordinary. The first episode will be our Puratchi Thalaivar MGR story.

Thadam Pathithavargal will be telecasted every Sunday the duration of the program is half hour, 1 pm to 1.30 pm. Please watch the program. The news was forwarded by MGR’s bodyguard K.P.Ramakrishnan’s son Govindaraj.

According to Vendhar media site the program is scheduled to be aired on 12 pm.

This the 100th post of the year 2014.
The restored version and our Puratchi Thalaivar starrer Ayirathil Oruvan had its 190th and final day run in Albert theatre complex. As the mind set of the general public was not in a mood for celebration owing to political situation in Tamil Nadu, MGR Devotees restrained themselves from celebrating in front of the theatre.

The theatre occupancy was 75% and many of MGR devotees from other cities and state cannot come to the theatre as there was less number of out station buses been operated.


Inside the theatre MGR devotees expressed their anger, whenever villains of MGR appear on screen they become Karunanidhi etc. to them.

I had to insert censor sound to remove MGR Devotees expressing their anger.
Posted by MGR Roop