In the previous post of 101st day of Ayirathil Oruvan restored version we had posted images of the celebrations conducted by various MGR fans association. We have also uploaded a video clipping of the function. 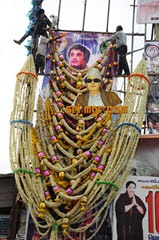 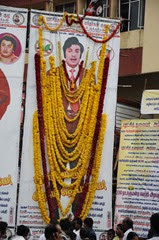 To your left is the MGR banner fully clothed with garlands a unique presentation by Bangalore MGR fans. To the right is garlands placed by Kalaiventhan MGR Bakthargal Trust. 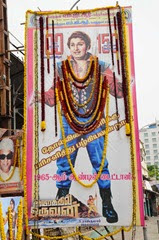 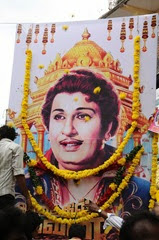 To the left is garlanded MGR banner made by Iraivan MGR Bakthargal Kuzhu & Aanaithulaga MGR Pothunala Sangam and to the right is a banner made by Ponmanachemmal Sri MGR Welfare Association, fixed in the car for the procession.

In this post we will be uploading the theatre experience of 101st day of Ayirathil Oruvan restored version. To recap the show was housefull and extra 300 people stood watching the show.

The MGR devotees and fans thoroughly enjoyed the 101st day they clapped and whistled for every praising word on MGR. For the censor certificate also they showed their joy.

I had edited the video in certain parts to enhance the brightness to show you how many members were in front of me and how many were in the side of the balcony showing camphor when their God flickered in the silver screen. 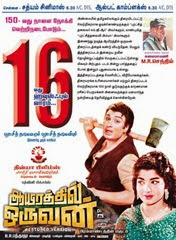 Our Puratchi Thalaivar starrer Ayirathil Oruvan restored version celebrated its 101st day in Albert theatre on 22.6.2014. Earlier we had posted some of the images, ads and accolades. 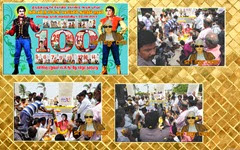 In this post we are updating the 101st day celebration. The function started from the resting place of MGR from 11 am. Ponmanachemmal Sri MGR Welfare Association gave annadanam to 1000 persons. 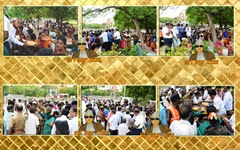 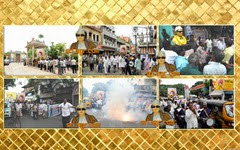 After the lunch MGR Devotees marched to Albert theatre making a MGR car for the procession. By 5 pm they reached Albert theatre and all other MGR associations performed pooja to their God MGR. 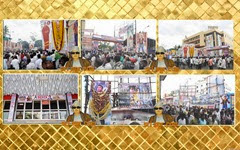 The reel box of Ayirathil Oruvan was taken as a procession to a nearby temple Director P.Vasu, participated in this function. 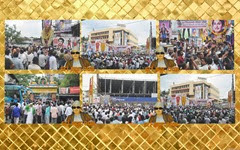 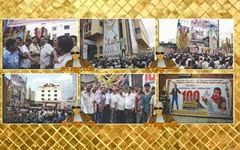 MGR Devotees from Bangalore had came to watch the movie and they had given the Bangalore touch to MGR banner which caught the attention of everybody.

The above images were shared by MGR Devotee Venkat.

The restored version Ayirathil Oruvan which was released by Divya Films on March 14th 2014, had crossed 100 days. MGR Devotees and MGR fans recreated 1965 in Chennai. 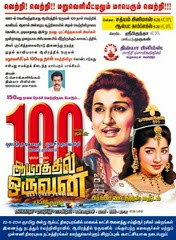 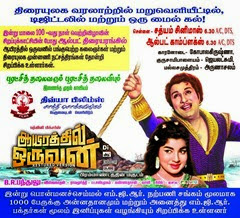 The show was full and extra 300 persons without seats watched the movie. Each and every praising words for MGR in the movie had claps and whistles. The people behind me whistled so much that I temporarily lost my hearing.

After the great success of Ayirathil Oruvan, newspapers and the TV media were full of accolades. Below are some from the newspapers. 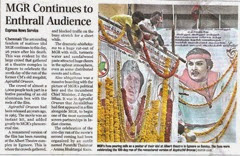 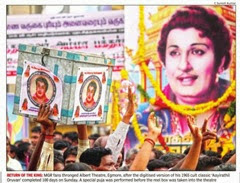 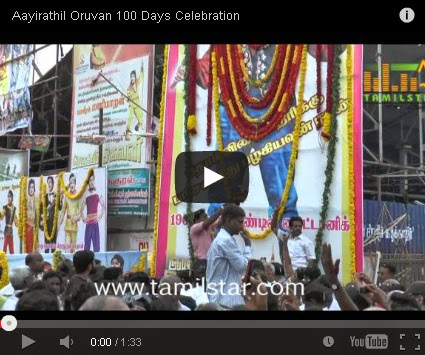 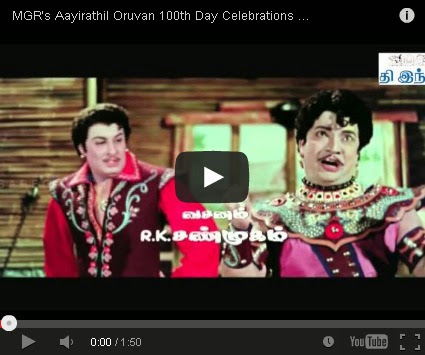 More videos of MGR fans celebration and inside theatre experience will be posted soon.

Today is our Puratchi Thalaivar MGR starrer Ayirathil Oruvan restored version 101st day. The landmark was celebrated with merry by all MGR Associations.

Padmini Pictures Ayirathil Oruvan which was released in 1965 had a 100 days run in three centres in Chennai. The same movie was restored and released by Divya Films Chockalingam this March 2014.

Above images to the left shows part of the crowd and to the right is people watching the title card.

Like many MGR fans I was also blessed to watch the movie on the 101st day of Ayirathil Oruvan restored version. Yesterday itself the booking for Albert was full and the movie was shifted to Albert to accommodate the crowd.

A light shower happened before the evening show. As usual MGR Devotees and MGR Fans performed and showed their extra ordinary devotion.

The restored version and our Puratchi Thalaivar starrer movie Ayirathil Oruvan is now running successfully 14th week. The ad is given in Daily Thanthi last Friday. 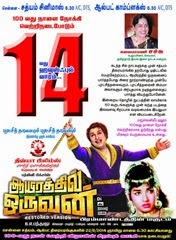 Coming week is 100th day of Ayirathil Oruvan all MGR fans associations will be celebrating this occasion in Albert theatre. 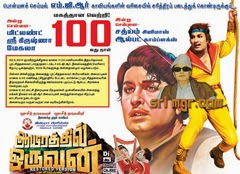 Above is the ad to be given for the coming week. People like me who had not had the opportunity to see the celebration when MGR movies had 100 days run now has a chance. I request MGR blog readers to participate and cherish.

Below video is captured in Albert theatre during 52nd day of the restored version Ayirathil Oruvan. In this video is the song Odum Meganagale followed by the dialog between Manimaran (MGR) and Poongudi (Jayalalitha), she expressing her love. 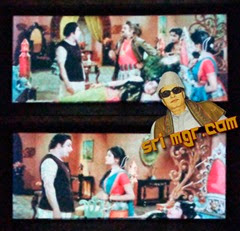 Images above is the scene in Sengappar palace MGR been called to give treatment for Jayalalitha’s illness.

In the above video time 1.39 see how the fans react when MGR says Naan Ayirathil Oruvan. Time 2.44 to 2.47 see how real and reel fuses in front of our eyes creating an optical illusion of MGR in reel and his fans in real combine.

Our Puratchi Thalaivar MGR starrer and the restored version Ayirathil Oruvan released by Divya Films is now in 13th week. Below is the ad given by Divya Films Chockalingam in Daily Thanthi. 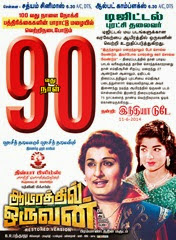 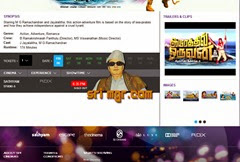 Our beloved Leader Puratchi Thalaivar MGR last movie “Maduraiyai Meeta Sundarapandian” was released in January of 1978 but his movies were always re-released regularly all over Tamil Nadu. MGR had left acting career in 1978 and left us in 1987 but still his movies are running to packed houses and his vote bank persists. 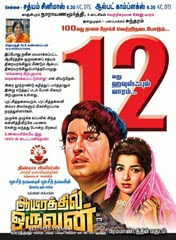 1. Padmini Pictures Ayirathil Oruvan which was restored and released by Divya Films is now in 12th week. The movie is running to record crowd in the two theatres Sathyam Studio 5 and Baby Albert. 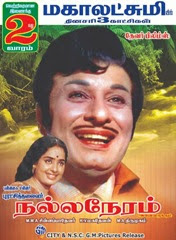 3. Sathya movies Black and White movie Kavalkaran is re-released this week in Broadway theatre. Below image is captured by MGR Devotee Loganathan.

Three movies running successfully in Chennai city at the same week is not a new record or first time for MGR but it is repetition and continues in 2014, the uniqueness of MGR Mass need to be mentioned in our MGR Blog. 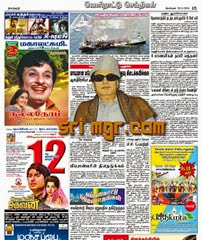 Above is the ad published in Daily Thanthi dated 30.5.2014. Side by side his movies creating record once again.