Below is the video clip of Thirunavukarasar, one of the Minister in Puratchi Thalaivar MGR regime. A 5 minute video explaining 3 significant features of beloved Leader.

He mentions about Prince Charles visit to Chennai December 1980 and his meeting with MGR.

The DMK chief Stalin was against such a move and he told to media persons that it is like a person naming someone else’s child and continued as his party DMK was instrumental in the construction of the bus terminus.

I was astonished as my house was near to Koyambedu, in those days when I was in 7th standard I came to know that the fruit market and bus stand will be shifted from Broadway to Koyambedu and father used to tell me that the traffic will be heavier and I should be careful in crossing the road. I still remember that. Unfortunately no ministers or ADMK party members objected to Stalin’s unauthenticated baseless allegation.

Later that day, the then Chennai Mayor Saidai Duraisamy countered Stalin’s statement with authenticated proof from the Government files.

Below is the reply of Saidai Duraisamy to Stalin.

The file size is 3 MB. Click the above image to enlarge.

And the report from the Government archives about MGR’s idea of shifting Fruit market and mofussil bus terminus to Koyambedu.

Click the above image to enlarge. File size is 3 MB.

Vaiko Shares His Thoughts On MGR

The General Secretary of MDMK had conducted our beloved Leader Puratchi Thalaivar MGR’s Centenary last year. I had the chance to see the video of his speech, quoting MGR’s unique character, his movies, his politics, how he helped others etc.

The 39 minute below video will make us shed tears for some instances he had quoted.  Vaiko had spoken the last 10 minutes extensively about MGR’s help to Tamil Elam movement.

The above video was uploaded by Tamil Galatta in Youtube.

And finally one app for our beloved Leader Puratchi Thalaivar MGR was released on 28th September 2018 by AIADMK. The app was released yesterday on the final day of MGR’s Centenary celebration held in Chennai.

The app works only in Android phones with operating system 4.0 and above. The size of the app is 2.2 MB and the version is 2.0.

The App opens with an image of smiling MGR. The screen then shows the 6 buttons.

First button is for the History

Second button is for Achievements

Third button is for Books of MGR

Fourth button is for Videos

Fifth button is for Gallery

Sixth button is for Creator

At present the Video section does not have any videos. 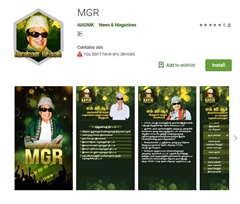 In the book section we can see some of the rare titles that were released in end of 1970s and early 1980s.

From the Google Play store description.

THE LEGEND, ONE AND ONLY PEOPLES LEADER FOREVER

Marudur Gopalan Ramachandran (17 January 1917 – 24 December 1987), popularly known as M. G. R., was an Indian actor, filmmaker and politician who served as the Chief Minister of Tamil Nadu for ten years between 1977 and 1987. He is a cultural icon in the state and is regarded as one of the most influential actors of the Tamil film industry.He was popularly known as "Makkal Thilagam" (People's King) as he was popular with the masses.He was a philanthropist and a humanitarian icon.

Most MGR fans have smart phone and they are all android phones. Below is the link for download.