We already posted in January 2017, the images and information about Vadavannur house constructed by our beloved Leader MGR. At that time the building was in dilapidated condition.

The words were out and former Mayor of Chennai Saidai S.Duraisamy have took up the renovation project and donated generously.

One of my friend Methil Rajan have forwarded the renovation stage of the house to share in our blog.

The work is in full swing.

Methil Rajan and his family members in front of the house and before the well with inscription “Sathyavilasam” done by MGR.

We thank Mr.Rajan for sharing these photos in our blog.

A superb unknown information about MGR’s autobiography which was alluded to be published by Macmillan. 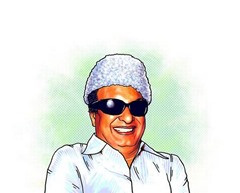 Thirty-six years ago, when I was working with Macmillan India as Branch Editor-South, the early biographies and autobiographies of film stars and celebrities were just emerging in India’s highly conservative book market dominated by imports. Macmillan, the colossus of educational publishing, hesitated before entering this space.

Suddenly, and without any notice at all, the managing director’s office in Bangalore published a fairly lavish book on Sunil Gavaskar. Under pressure to produce something similar, my vice-president, R. Narayanaswamy, who was a friend of a bookish minister of the time, wondered whether we could do a book on Chief Minister M.G. Ramachandran.

So little was known about this super-star, the mystery man of Tamil Nadu: a Malayali who had captivated a generation with his light skin, impressive physique and carefully selected roles that showed him as the protector of the poor. He had a talent for comedy too that was never fully exploited by any director because the public yearned for an impossibly grand hero who could make them forget their real-life sorrows.

Delicate enquiries were sent to MGR. And yes, he was open to the idea of a book on himself but wished to narrate it himself. An autobiography? Our dreams took flight and one morning the three of us set off for Ramapuram Gardens on the outskirts of Madras where MGR lived. The Minister, Narayanaswamy, and I.

We drove into the curiously bare compound with a dry fountain in the front of a large ‘garden house’ style building. My memory is a bit hazy but I don’t think there were too many policemen or security personnel around.

Someone met us on the steps of the porch. A large photograph of a woman dressed in traditional Nair mode hung in the verandah over the entrance. “That is MGR’s mother,” whispered the minister as we were led in. “This way,” said a man dressed in dazzling white.

We were shown into a dimly lit room with two air-conditioners and asked to seat ourselves on a U-shaped sofa. It was blazing outside but we were shivering.

In a short while a door opened and in stepped the legend of Tamil cinema: the hope of millions and the man on whose film posters women famously slept. He shifted his dark glasses very slightly to study us. He would not let us stand up, seated himself very quickly and turned to the minister: “Wasani variliya?” (So, Wasani didn’t come?”) Sharad Wasani was managing director of Macmillan and he was supposed to have joined us. The Chief Minister had done his homework!

His voice was both rough and sweet — a peculiar mix. He suppressed a smile at my Tamil and guessed from Narayanaswamy’s accent that he was from Palghat. Some pleasantries were exchanged in Malayalam-Tamil and in English before he stood up saying, “Let’s eat before the idlis go cold.”

He led us to a large but simply furnished dining room. He asked me to sit facing him and waved the minister and Narayanaswamy to the further end of the table. We ended up speaking very loudly to each other. Along with fluffy idlis and appams came sambar and chutneys — and fish curry. He himself had a large glass of buttermilk and dried fish and what looked like pieces of roast chicken. Not a single piece of carbohydrate passed his lips.

“Say something…” he said, and we desperately tried to make conversation. In an attempt to say something complimentary I pointed to his buttermilk and said, “So that is the secret of your complexion?” He stopped eating, tilted his head very slightly, smiled and said something that I cannot record here for posterity, but everyone laughed with relief over the fact that a successful personal exchange had been accomplished.

After breakfast we went back to the dark, freezing room and he said: “Look here… I cannot write but there is a lot I’d like to say. Shall I tape what I remember about my life and will you make that into a book?” As the publishing plan unfolded, he said something I must share. “You know, when I’m faced with a complex problem of government I think of the roles I played and wonder what those characters might have done in a similar situation. It always helps me decide what will benefit the poor.”

He came all the way to the porch to see us off.

Macmillan did not publish the book after all, but the image of MGR as we pulled away from the porch is still clear in my memory — arm raised, eyes screened, and that confident half-smile.

From the pages of The Hindu, article by Mini Krishnan.

This is the song from Netru Indru Naalai, like all MGR’s prophetic song this also came true. 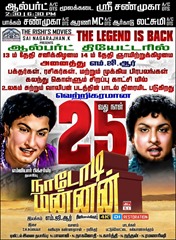 History repeats itself. Emgeeyar Pictures Nadodi Mannan is now 4th week in Albert complex. The above is ads in Tamil daily. 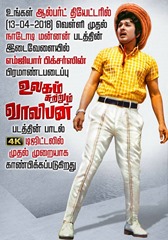 The songs from Ulagam Sutrum Vaaliban done in 4K resolution will be shown during the interval of Nadodi Mannan from 13th onwards. A double treat for MGR fans.

Ayirathil Oruvan is been released this week in Agasthya theatre by Divya Films.

Not only in Chennai in many major cities of Tamil Nadu, MGR digitized movies are released and running successfully.

The Legend Has Returned

Last week our beloved Leader Puratchi Thalaivar MGR movies were re-released in many parts of Tamil Nadu. This week also many of his movies are released in malls and theatres.

The movies listed below with images from the respective theatres. 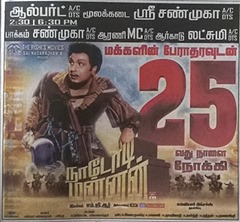 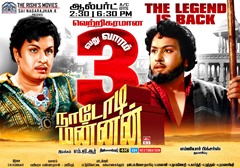 Emgeeyar Pictures Nadodi Mannan is in 3rd successful week. The above image is from Daily Thanthi City edition and below that image is from ad previously published in media. 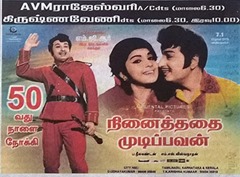 Oriental pictures digitized movie Ninaithathai Mudipavan is been released in AVM Rajeswari and now it is now reaching combined 50th day. Above is ad from today’s Daily Thanthi and below is the poster. 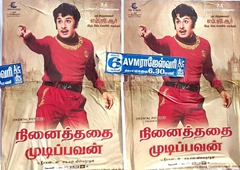 The Legend Is Back

For the past two weeks many MGR movies were released in theatres and as well as in malls. 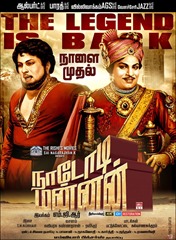 Last Sunday I came to know that the movie was nearly full in Albert for the evening show as usual MGR devotees celebrated in a grand manner. 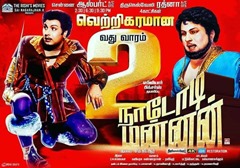 I had a chance to see the video clipping posted in Facebook by a MGR fan, the print is awesome.