The year 2014 will see the release of Ayirathil Oruvan in restored version. Olikirathu Urimaikural editor B.S.Raju has forwarded the newest poster image (given by Divya Films) of Ayirathil Oruvan showing that the trailer and digital songs are going to be released on January 10th. 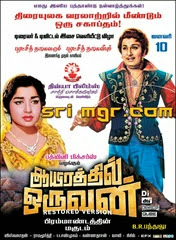 More news on restored version of Ayirthil Oruvan will follow. 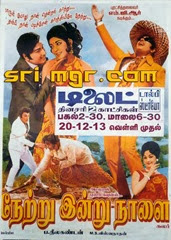 As per the images the movie print looks good. The movie had much political dialogs. And one song “Thambi Naan Padichen” had hint on the politics of those days.

Above image to the left is a shot showing “Padum pothu” and to the right is “Thambi Naan padichen” song, see the enjoyment of MGR fans.

His son Govindaraj has forwarded this exclusive video to share in our MGR Blog. Below is the video clip of K.P.Ramakrishnan giving a speech and honoured by YB Tan Sri Koh Tun Khoon (Minister in the Prime Minister Department).

The speech also includes how MGR helped in releasing the movie Thali Baghyam, his real life stunts and his humane nature.

People turned in large numbers for the function. We have already provided images and videos of the function. Click the links given below.

Today is the 26th death anniversary of our beloved Leader, Puratchi Thalaivar, Ponmanachemmal MGR, 26 years before when the tragic news that our King of Kings, God of the Poor has finally breathed his last was announced in radio and TV, widespread panic gripped his fans and devotees. They were left in the lurch the days that followed somehow brought back them to reality that still their God is alive with them in the form of movies, images and speech. To this day many of his followers make up their mind that MGR is not dead. 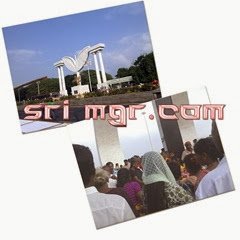 Today thousands of people came to pay their tributes in the final resting place of our Thalaivar. People from neighbouring states and as well from Singapore, Malaysia and United States also visited the memorial of MGR. 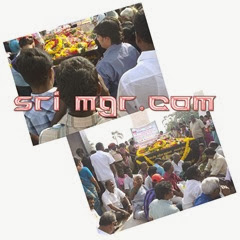 Ayirathil Oruvan movie a restored version is going to released in January 2014, earlier we had published a post titled Ayirathil Oruvan restored”. As per the article Divya Films had mentioned they had restored full length of the movie.

Ayirathil Oruvan will be released in Tamil Nadu, Kerala, Pondichery and Karnataka. More news will be posted later.

Today they had given an ad in Daily Thanthi, below is the image.

Another MGR movie Emgeeyar Pictures Ulagam Sutrum Vaaliban is being re worked in HD format and will be released shortly. The movie will have the original 1973 sound track, (earlier in 2008 Ulagam Sutrum Valiban was released in reworked sound track, which most of the MGR fans did not like), Digital intermediate with Cinemascope. The date of release has not been mentioned hope the movie will be released in 2014. 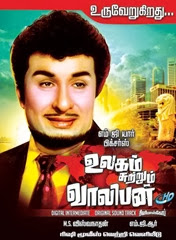 The above ad is from Daily Thanthi. 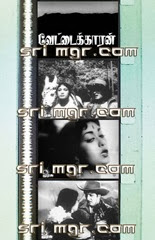 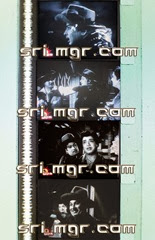 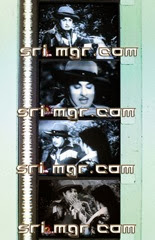 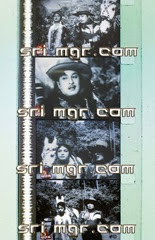 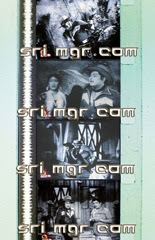 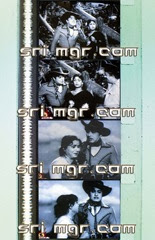 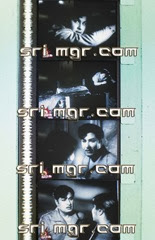 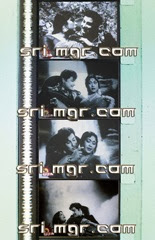 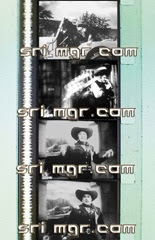 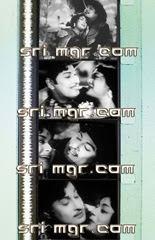 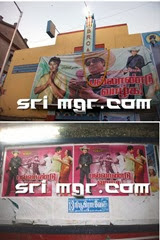 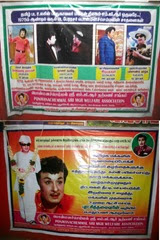 The movie had many punch dialogs, Pallandu Vazhga is considered one of the greatest movies for MGR.

One of the famous MGR punch from Pallandu Vazhga.

And the famous philosophical song.

Sarees To The Poor - II

Free food and Saree was distributed to the poor on behalf of MGR Devotee Sailesh Basu and his brothers through Ponmanachemmal Sri MGR Welfare Association. The function took place in MGR memorial house in T.Nagar (Mambalam) on 15.12.2013. 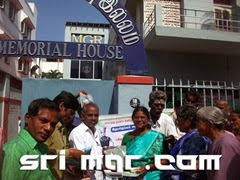 Earlier all the members of the association gathered and MGR’s Grandson MGCB Pradeep did a pooja and garlanded the MGR statue in the memorial.

One week left for the 26th year of our beloved Puratchi Thalaivar MGR remembrance day, Ponmanachemmal Sri MGR Welfare Association will be conducting peace procession followed by distribution of sarees and food to the poor. 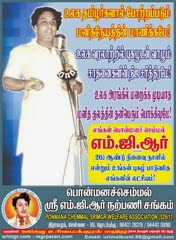 And in the MGR resting place mini calendars will be given to MGR fans and members of the Association. MGR Fans and other district association members will participate.

Sarees To The Poor

One of MGR devotees Sailesh Basu and his brothers on remembrance of their Mother Mrs.E.K.Pankajam, 51 sarees were distributed to the poor on 8.12.2013 in MGR resting place.

The help was provided through Ponmanachemmal Sri MGR Welfare Association. Below are some of the images taken during the function. 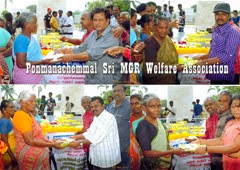 After this annadanam was also provided to the needy in MGR resting place. Every week free food is given to the poor by the MGR devotees and members of Ponmanachemmal Sri MGR Welfare Association.

One of our blog readers Muralidharan Murugan had informed me about the digital restoration of MGR Fans cult movie Ayirathil Oruvan by Divya Films Chockalingam who had already done such reworking with the song portions of Ulagam Sutrum Valiban way back in 1990s.

Earlier Emgeeyar Pictures three gems Nadodi Mannan, Adimai Penn and Ulagam Sutrum Valiban were released in Qube and Dts format. And this movie Ayirathil Oruvan deserved an uplift and the same is been done by Divya Films Chockalingam.

The article written by Karthik Subramanian for MGR movie conversion to DI, restoration and re-recording the back ground music is been published by The Hindu recently. Below is the article.

49 years after its release, MGR-Jayalalithaa starrer to return with re-recorded background score

Soon, one will get to hear the evergreen anthem of MGR — “Atho antha paravai pola vaazha vendum” — in digital surround sound at multiplexes across the state.

Divya Films, which released the Sivaji Ganesan epic ‘Karnan’ in digital format in 2012 to a good response, is working on the finishing touches to the digital version of ‘Aayirathil Oruvan’ at the Prasad EFX studio in the city.

The digitally restored film will also feature a completely re-recorded background music (BGM) played out by an assistant of veteran film director M.S.Viswananthan. It has been recorded in digital surround sound. The technicians at Prasad EFX who had previously done the restoration for ‘Karnan’ and ‘Paasa Malar’ are working on technical aspects of the restoration, including preparing the ‘digital intermediates’ (DI) and scope conversion for converting the 35 mm film to digital scope.

G.Chockalingam of Divya Films says he has been working on restoring ‘Aayirathil Oruvan’ ever since he completed the release of digital ‘Karnan’. “The film negatives were in a more damaged stage than those of ‘Karnan’. So, we had to painstakingly apply the digital restoration and corrections to every frame of the 18 reels. With ‘Karnan,’ just three reels needed extra care. But here, the entire length of 2 hours and 45 minutes has been digitally enhanced and that is why it has taken this long to be restored,” he said.

Mr. Chockalingam plans to unveil the marketing strategy for the re-release on December 24, coinciding with M.G.Ramachandran’s death anniversary. The film has been slated for a January release.

According to the image given in The Hindu, we can see vast difference between both the versions. Lets hope the full movie output will be the same as they promised. Imagine how great it will be to hear the crystal clear voice of our Puratchi Thalaivar in the reworked format.

R.R. Pictures Panam Padaithavan is re-released this week in Mahalakshmi theater as 3 shows. A family story, MGR does the role of an athlete, Nagesh as his brother and goes to Calcutta to attend an athletics meet, happens to see K.R.Vijaya and fell in love but due to circumstance marry Sowcar Janaki but their marriage life is short lived and she dies horribly and MGR marries K.R.Vijaya and have a child and how the family gets united is the remaining part of the story. 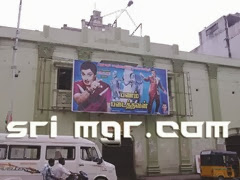 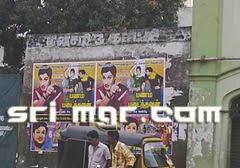 The songs that are still remembered by MGR Devotees and MGR Fans and the final stanza etched in the history forever.

A classical MGR duet song (dream song) MGR as Mughal Emperor. I imagine if this duet song alone in colour the depth will be more to the story.

For comments and suggestions: replytomgr@live.in

The newly formed organization Ponmanachemmal Sri MGR Welfare Association gave annadanam to poor, they had planned to provide food and necessary support to poor. The Annadanam will be conducted on every Sunday in MGR resting place.

For the first time on behalf of Ponmanachemmal Sri MGR Welfare Association one of the members and noted author Mekala Chitravel and MGR Devotee Neyveli Krishna Kumar jointly provided free food to the poor.