A year back when I was checking webstat.com I used to see several page hits from South Korea, Japan, Norway and also sometimes from South American countries. I did not receive any mail or comments from South Korea in particular. I thought that it should be google error that someone stumbled upon our site through search engine.
But South Korea was always in the list of website traffic. A week back we published BBC Interview of MGR and I received more comments in a short time. A person named Nithipalan from US commented in our blog. I sent a thank you note on behalf of srimgr.com and asked him is this the first time you are commenting, he replied back to me and the reply is valuable mail not only for me but also for all MGR Fans around the World. With his consent I edited the mail and publishing here for your views. I did not know him in person only his email and he has consented to publish his mail in our blog without any delay, because we are MGR Fans.
Nithipalan
I am 59 year old MGR fan for about 50 years. I am a Sri Lankan born Canadian, but has been living and working in many countries for past 35 years, recently moved from South Korea to New Hampshire, USA. I am involved in Renewable Energy industry in both LED's and Solar in the executive level.

I adore MGR from my child hood and met him once in Colombo at my Uncle's house (Radio Ceylon Mylvaganam) when he visited with Actress Saroja Devi for dinner. MGR and me are both born in Kandy and all my classmates know very well about my interest in MGR.

After he became the Chief Minister, I had the opportunity to visit him as the Secretary of Ealam Tamil Association of Alberta, Canada, related to Ealam Tamil issue. During 1984, both Indira Gandhi and MGR was closely involved in Sri Lanka issues and both requested us to come up with an constitution similar to Canadian Federal system. The whole world knows, how much MGR was involved with Sri Lankan Tamil issue. If he would have been alive, he would have solved long ago.

He is a wonderful human being beyond imagination and the genuine care he had for the down trodden people was unmatchable. More and more I read about him, my respect continue to increase.

I hope you all continue with these blogs and web sites to teach the younger generation about respect, good habits, great will power to success, and the humbleness even after the great success.
Posted by Roop No comments:

You can clearly see the difference of who dominates in the talk show right from the beginning. You can also feel how intelligently MGR uses his words and how quickly and shrewdly reacts to some of the questions.

In one particular question MGR narrates his life history under 4 minutes without any stumbling, the speech flow was excellent. His knowledge in Politics (freedom movement) Cinema and people in particular are exhibited in his speech as usual.

When I heard this speech for the first time I noticed the clarity of the sound. This talk show was recorded in 1974, I cannot believe this record is 35 years old rather appeared to be taped a year back. The very mention is the voice of MGR, crystal clear than in his films of those days.

The restriction in YouTube upload is 10 minutes I had to edit this speech into two parts. First part is embedded here.
Posted by Roop 1 comment: 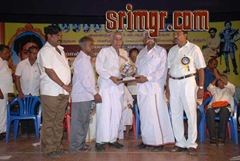 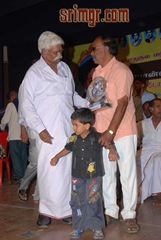 One of the oldest MGR Fans Duraisamy from Coimbatore an Engineer in profession was felicitated in the function. 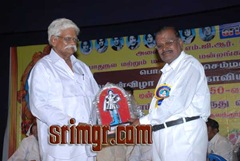 Director Saroj Kumar was also felicitated in this function near to him is B.S.Raju, Editor Urimaikural MGR Magazine. 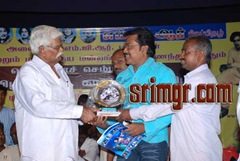 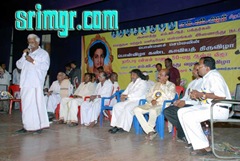 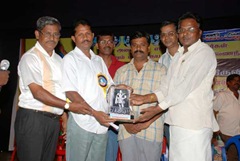 Tutucorin MGR Fans association was congratulated for their work in casting MGR name in Guinness Book of Records for screening more than 100 MGR movies consecutively in Tutucorin Sathya Theater, I have already updated this event in our blog.

Second from left is T.T.Selvan. To the extreme right in the photo is So.Ma.Velandi who traced down Jeya Mohan when he indecently wrote about MGR and Sivaji in his blog in 2008. 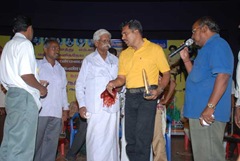 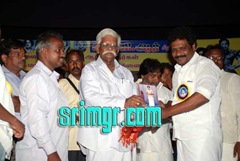 Yesa Durai (ADMK) from Tutucorin was felicitated by Pulavar Pulamaipithan who was also responsible for screening more than 100 MGR movies in Tutucorin Sathya theater for Guinness Record.

MGR is the only person who named his Party, his Newspaper and his movie titles in his mentors name. 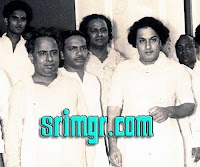 On 15th September 2009, MGR's Mentor C.N.Annadurai Centenary year completed. On the occasion a Five Rupees Coin was issued by the Central Government. On behalf of srimgr.com we thank the Minister and persons involved in bringing out the coin in respect of former Chief Minister of Tamil Nadu, Silver tongued, Gifted writer and MGR's Mentor C.N.Annadurai fondly called as Anna.

Both images were given to me by MGR and MG.Chakrapani Grandson Pradeep.
Posted by Roop No comments: 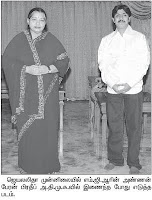 We wish him success.

Part of the MGR Fans who graced their presence for the function. 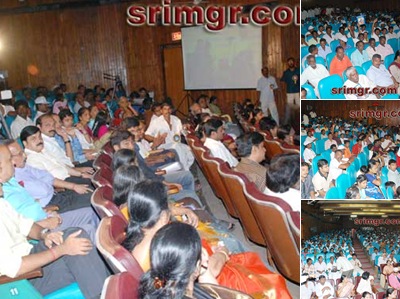 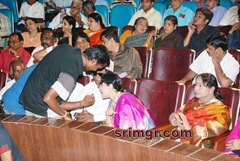 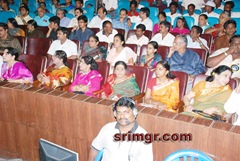 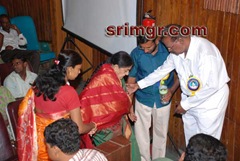 Actress B.S.Saroja entered the dais to receive the MGR Award. Continued by all MGR Co-stars and other VIPs. 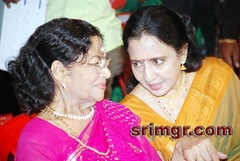 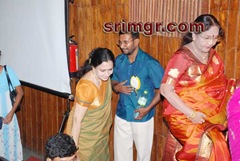 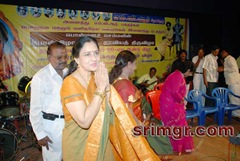 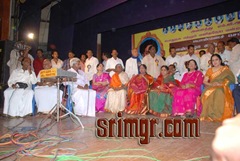 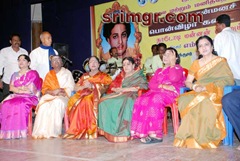 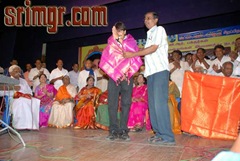 MGR and M.G.Chakrapani’s grand son Pradeep was welcomed by Majordasan. 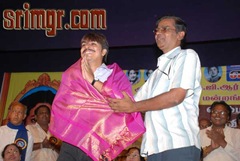 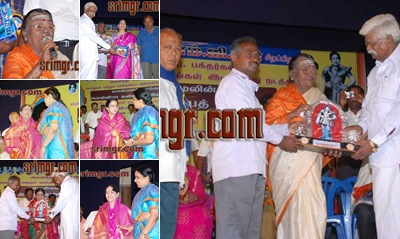 The Golden Jubilee Book was released during the function. 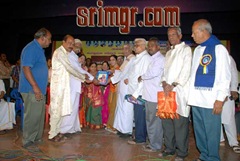 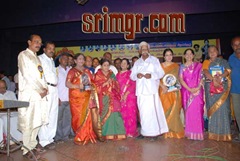 All VIPs with their awards. 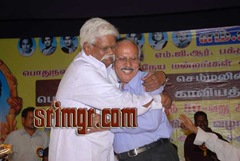 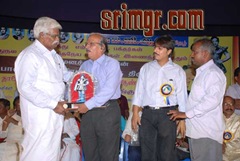 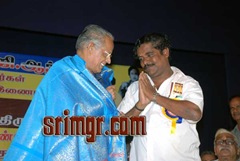 Founder of MGR Bio diesel Alagarsamy was welcomed by Theni Rajappadasan and a two minute emotional speech which entered the hearts of MGR Fans. 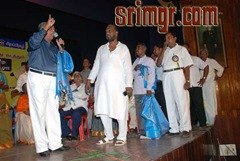 This was taken from Dinamalar Vellore edition.

WE wish him success.
Posted by Roop No comments: