An Evening With MGR’s Bodyguard

For the past one week Chennai city is having dual climate like our Puratchi Thalaivar dual action movies. In the morning it is hot and humid in the evening it is breezy and rainy. One of these days I had a chance to visit and meet MGR’s bodyguard K.P.Ramakrishnan. He is now 86 years old still active and healthy. 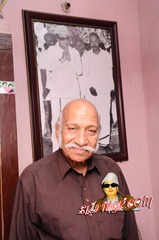 K.P.Ramakrishnan the bodyguard of our beloved Leader MGR

His son R.Govindaraj took me to his private room, a large portrait of our MGR took half of the space, he introduced me, the very first word K.P.Ramakrishnan sir said is MGR and he blessed me for my work. 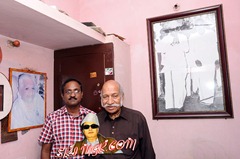 Photo taken in his private room behind him is the large portrait, I am standing with him, a proud moment for me and to cherish forever

K.P.Ramakrishnan sir talked about his close association with our Puratchi Thalaivar from the 1950s. He had worked nearly in all his movies as one of the stunt men or a character role or as MGR double when MGR is facing the camera and if the shot is not masked.

He also said that our Puratchi Thalaivar suffered lot of hindrances while touring Tamil Nadu from 1953 to 1977. The five bodyguards looked at our Thalaivar well being. 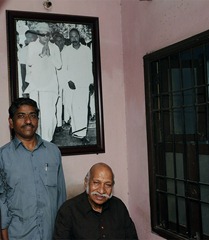 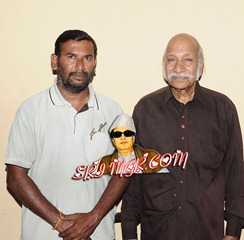 To the left KPR and his son Govindaraj, to the right KPR and MGR Devotee Venkat

The talk went to movie he told MGR took utmost care while shooting fight scenes. He always double checks the stunt performance before going for the take, sometimes he has to do home work, one such scene is the walking scene in Neerum Nerupum movie.

K.P.Ramakrishnan mentioned one incident in the movie Ninaithathai Mudipavan, involving knee pad, the production assistant had given 150 rupees worth foreign knee pad for MGR and 25 rupees knee pad to Ramakrishnan, before take MGR asked to show the knee pad he is wearing, with little hesitation he showed, MGR became angry and asked them to provide same kind of costly and protective knee pad to Ramakrishnan and then only he will go for the take. The scene had lot of diving and sliding the knee pad is vital for that scene there are also chances that the knee will be injured during such scenes. Ramakrishnan sir eyes glistened when he told this incident, MGR cared so much for co actors. 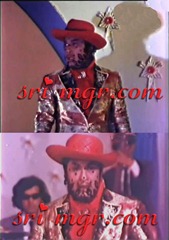 The famous skating scene from the movie Ulagam Sutrum Vaaliban

I asked about Ulagam Sutrum Vaaliban climax scene he said MGR planned a very different climax scene having fight in a mirror room, but he changed it to skating sequence. Ramakrishnan sir said he and Asokan daily practised skating, in the movie MGR did 99% of the stunt.

During action scenes involving jumping or falling from a balcony MGR will come up to the balcony for checking and asks the stunt director about the precautionary measures for that stunt. If he feels something will go wrong he will break the shots into two, one before fall from balcony another hitting the floor in this way he reduces the chances of accident.

I thank K.P.Ramakrishnan Sir and his son R.Govindaraj for allowing me to take an interview and publish this in our MGR blog.