The Hindu Tamil daily continuously wrote about our Puratchi Thalaivar MGR for the centenary celebration. They shared the authoritative and rare information which were already published in many books and magazines. 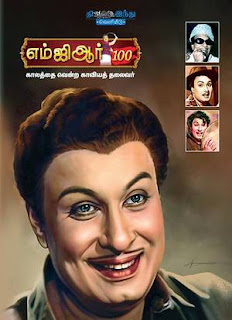 Later they published it as a book titled "MGR 100 Kaalathai Vendra Kaviya Thalaivar". Above is the cover of that book with a mesmerizing MGR image done by A.P.Sridhar.

"The Hindu Tamil's tribute to M.G.Ramachandran, MGR 100, has sold more than 5,000 copies in less than a month of its launch on January 26. The Hindu Tamil ran a 100 day series titled MGR 100 on the eve of his centenary focussing on the many attributes of the actor-politician who founded the AIADMK.

This series that recalled his colourful legacy in an interesting way received an overwhelming response from the readers. The successful series was then compiled into a book, which again was a huge hit among readers.

A second print order of 5,000 copies of the book had also been placed, and have had a great response. The Hindu now plans to go for a third print of the book, which is priced at Rs.200".

Above article is reproduced from the newspaper.

Email ThisBlogThis!Share to TwitterShare to FacebookShare to Pinterest
Labels: mgr, MGR 100, the hindu

What Happened In January 1967?


This post was scheduled to be published on 12.1.2017 on the 50th year. Due to unavoidable circumstances it was delayed. Many of us know the historical significance of this day, the incident and the aftermath became a catalyst for our beloved Leader's mentor party to attain the status of ruling party of Tamil Nadu. 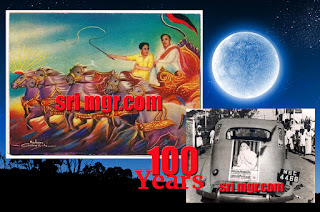 To the right is the poster showing MGR with neck cast, asking people to vote for "Rising Sun" (the election symbol of DMK) 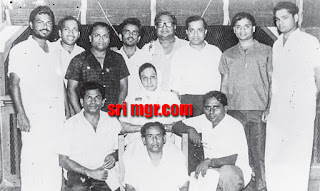 January 12th 1967, afternoon, after attending the election campaign, MGR came back to his house for the lunch. On that fateful day, one of his villain actors, M.R.Radha accompanying with Vasu (producer of Petral than pillaiya?) visited Ramavaram garden to talk about the new project. While conversing with Vasu, MGR heard a bang on his left ear. He saw M.R.Radha pointing the gun, blood was oozing out, MGR tried to stop the blood flow and felt dizzy, he staggered and reached his car and motioned his driver to take him to hospital.

And what happened next? how MGR dealt with the incident? how MGR felt about the results of the general election? all these are given below by his personal bodyguard K.P.Ramakrishnan. He was with our beloved leader MGR when he was convalescing in Government General Hospital.