This is nothing to do with MGR watch but interesting article about MGR series watch launched by Casio. 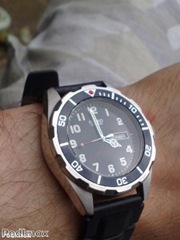 A new Casio watch, from its MGR series, is to be released

Watch fans who want to wear an item that looks tough and stylish are being advised to go for the Casio MGR-7500.

The MGR series is one of the most expensive of the watchmaker's collections, which believes in "going from zero to one" to create something that was not available before, but the number of features more than makes up for this, Review board magazine has reported.

For the MGR-7500, these include having a Diamond Like Carbon (DLC) coating, which is highly scratch resistant, a daily alarm, stopwatch and a calendar that displays the day and date, as well as a mode that can display the time for 27 cities in 29 various time zones.

When in this mode, pressing the top right button can also alter the home city to one of the owner's choosing.

Features within this watch do not stop there, either, with a water resistance of up to 200 metres, along with a technique for battery life that has the second hand jump on a two second interval to alert the user of a low battery.

Many playback singers have lent their voice to our beloved Leader Puratchi
Thalaivar MGR. Of that we are going to see K.J.Yesudas fondly called Gana Gandharvan.

Many MGR movies released after 1972 had one or two songs rendered by K.J.Yesudas.

He had sung 19 songs for MGR alone. His first song for MGR movie (actually second if we consider he lent his voice for Chandrababu in Parakum Pavai) is “Thanga Thoniyilae” from Ulagam Sutrum Vaaliban and his last song “Thendralil Adum” from Maduraiyai Meeta Sundarapandian. 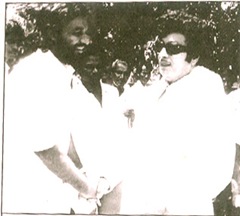 Below are some of the Duet songs and Philosophical songs sung by K.J.Yesudas which I liked most.

Another interesting point in this song apart from K.J.Yesudas mesmerizing voice, MGR used his political symbol of Two Leaves in this duet song. Video uploaded by Rajshri.

Watch how suitable MGR look and K.J.Yesudas voice interlaced in this philosophical song.

A philosophical song from Uzhaikum Karangal, using soft voice of K.J.Yesudas instead of regular majestic TMS voice. But the picturing of MGR as a Messiah like and the ADMK flag took the song to another stage.

Another song sung by K.J.Yesudas a slow song

One of MGR’s heroines Manjula today passed away. Her first movie with our beloved Puratchi Thalaivar MGR is Rickshawkaran, for this movie MGR received India’s Best Actor Award in 1971. 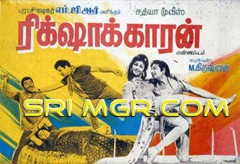 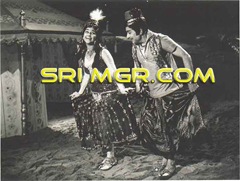 MGR’s favourite lyric writer Vaali (Rangarajan) passed away yesterday in  Chennai at the age of 82. He first worked with our beloved Leader for the movie Nallavan Vazhvan for the song “Sirikindral Indru”. Though the movie was a average run, MGR used his talent and patronized him.

From Nallavan Vazhvan to Maduraiyai Meeta Sundarapandian this duo produced immortal songs on screen. His greatest song that happened in MGR’s life is “Naan Aanai Itttal” in Enga Veetu Pillai. MGR an actor who became the Chief Minister of Tamil Nadu, 1965 it was mere lines became immortalized in 1977. 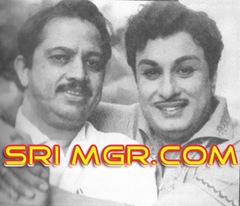 The songs written by Vaali in MGR movies

For me the greatest songs by Vaali for MGR movies are:

Most of MGR philosophical songs are written by Vaali, I am very much blessed for my Professor who taught me Tamil in College had done his Ph.D., in Vaali songs.

This song is from Olivilakku, the lyrics became more popular in 1984 when our beloved Puratchi Thalaivar was in United States undergoing Kidney Transplant.

We srimgr.com team pray for his soul to rest in peace.

Earlier this movie was re-released in two theaters in Chennai on 28th September 2012, in Mahalakshmi and Anna theater, Mahalakshmi had a three weeks run.

Not even one year has passed Olivilakku is re-released in the same theater. On my way to clients work I had to pass through Mahalakshmi theater and took some images (no videos) as the time was 5.15 PM. 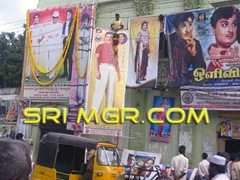 Already MGR fans has started to show their devotion by garlanding MGR banners. Above are some of the images.

There are more banners placed by various MGR fans association.

King Claudius to Laertes “Revenge should have no bounds” a line from Hamlet. Taking revenge in Tamil Movies are run of the mill story. In MGR movies the theme revenge is categorized to five, they are taking revenge for his Mother, Father, Sister, Family and Country.

The concept of revenge in MGR movies is giving justice for the wrong doing by his enemies. Mostly they were taken into custody or they repent for their sins and rarely killed.

Most of MGR movies have a widowed mother. But when looking into the story of MGR movies for the revenge theme the number of movies falls under this category they are:

Of this the grandest revenge movie for his Mother is Adimai Penn.

Astonishingly more revenge stories are attributed for his fathers demise. The movies are: 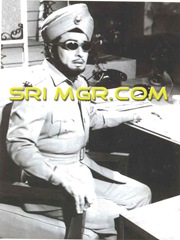 Above image is from Sangay Muzhangu.

Not more than two movies for the taking full revenge by our Hero, against the opponent done on screen. One movie Engal Thangam though appears to fall in this category it is more apt to say that the story is about brothers love.

The movies for this category is two: 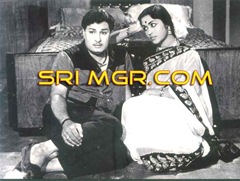 This includes not only the villain killing MGR’s father and mother but also tormenting his siblings. This includes two movies. 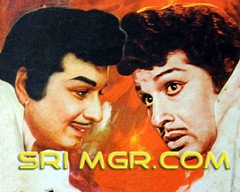 The above image is from Neerum Nerupum, this movie involves revenge against Asokan who had killed MGR’s Father and Mother. Same movie can be counted in For Country also.

V. For The Country:

Most of his movies either Social oriented or period movies MGR’s character is centered around liberating the hardship faced by his country men, those includes the below movies. 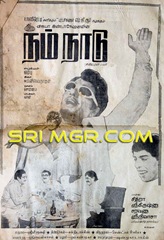 Revenge theme against his Employer who becomes corrupt and anti social. 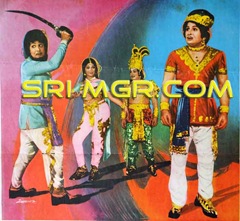 A classic novel of Akilan “Kayalvizhi” directed by MGR and named as Maduraiyai Meeta Sundarapandian a revenge against Chola Empire, how MGR succeeds in his task forms the core of the story.

Rickshawkaran movie which fetched MGR his best Indian Actor Award is also about revenge, but in this he fights against the injustice of Asokan, this revenge MGR takes is for somebody else, the foster child.

I might have missed some movies, if any please let me know.Thanks to Vinod Sir for cross checking the list.

Below are the MGR movies that have reached 100 days and more in Coimbatore theaters.

City centres like Chennai, Madurai, Trichy, Salem, Coimbatore etc. only Coimbatore had a very low 100 days movie run. MGR Hit films for example Anbay Vaa, Kavalkaran, Nalla Neram, Pallandu Vazhga, Neethiku Thalai Vanangu, Indru Pol Endrum Vazhga and Meenava Nanban did not have a 100 day run in Coimbatore, sure not a fort for MGR movies but politically it has a strong MGR base. 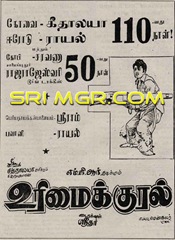 ALS productions first venture with our beloved Leader Puratchi Thalaivar MGR is Chakravarthy Thirumagal. The movie was first released in 18th January 1957 all over South. 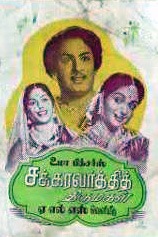 The first MGR movie for Director P.Neelakantan then he went on to direct 16 other movies with MGR as the lead.

The movie is re-released tomorrow in Mahalakshmi theater. More of images and videos of re-release will follow soon.