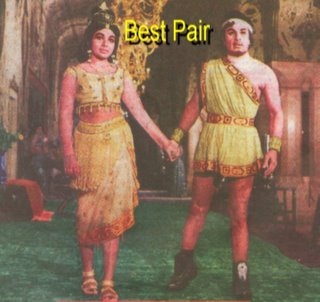 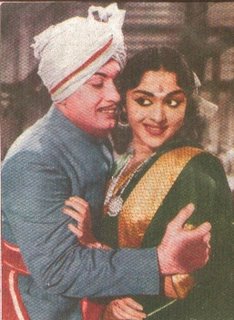 In 1967 Assembly Election was won by the DMK, under the leadership of Anna, after his victory Anna went to the Hospital, were MGR undergoing treatment and gave the list of Ministers for MGR's approval!, that Anna knew MGR's charisma and treated him like other front line leaders of the Party.

In 1968, MGR's 100th film released called "Oli Vilakku" Unusually MGR donned a negative role, which is a very big risk for any actor's 100th film. MGR's mentor Anna fell sick and went to US for the operation. Anna's tenure as Chief Minister was short lived. Anna died of Cancer in Feb' 1969. MGR stood on Karunanidhi's side; thereby Karunanidhi succeeded Anna even though Elder Leaders opposed giving Power to Karunanidhi. The party was saved from a split. Can we say this is the Fate for MGR it lead to open the door to active politics.

"Adimai Penn" Slave Girl one of MGR's Magnum Opus movies which was in the anvil for 4 years was released on May 1969.The movie broke box office records. In 1965 first version of Adimai Penn is a different story. Lavish sets erected and shot with different actress. After MGR's accident in 1967 not only Adimai Penn but also many films progress halted. And after returning to the set many films were renamed, many actors and actress were changed. The fans favourite pair for MGR, Sarojadevi got married and MGR had to change the entire script and importance was given to Jayalalitha. In this film both MGR and Jayalalitha took dual roles. Jayalalitha's performance in action and dance were laudable. One song was entirely shot in and in the Kings Bed room. MGR and his crew were not satisfied with the Bed room (though the walls and other things were cast in Gold and embedded with precious stones!) they felt the flooring is not contrast to the Walls and ceiling, they covered entire Bed Room with White Mica sheet which enhanced the rich look of the Bed Room. MGR costumes are very colourful. (I will tell more about this film in my Blog later)
Posted by Roop No comments:

After his successful film “Nadodi Mannan” MGR met with an accident in the stage drama that during stunt scene. One of his legs was broken into two, his rivals had a very good opportunity and were content on saying that MGR career came to an end. Even he comes to act again he won’t fight like before. The fracture took six months to heal. In leisure MGR watched lot of films, one film inspired him that was a English film, the hero was recuperating from a fractured leg and was spending time in his flat with a Wheel chair, he witness a crime of his neighbour and how he saves the girl is the rest of the story. MGR was eager to act in that film in that condition, so he asked his story writer to make a Tamil version of that film. The work is going on but his brother did not allow him. After his recovery MGR completed movies that were stopped after his accident. He was spending 22 hours of work per day to complete the films. One director said that MGR did not take a break for 10 days and worked at a stretch to complete the climax of a film.

All films released in 1959 and 1960 did an average business in Box Office. In one song of the movie MGR walk is very different from the one he always does. We know that the scene was taken after the accident. MGR needed a break through and he has to prove he is the Emperor in the Box Office collection. That happened in 1961 by a film named “Thirudathe” – Don’t steal. In this movie MGR character is not immaculate as in other films; he steals to make ends meet. Albeit the movie shows MGR with a negative role, the film broke records. From then on there was no turning back. Every year from 1961 till 1977 taking the scepter, one of his films remained top at the Box Office.

From 1961 MGR changed his stance from Mythological to Social films. He created an individual formula for his films. All his movies depict him a Philanthropist, Do gooder, Saviour of downtrodden, a socialist, love to Mother and . And most importantly his film characters entwined with Tamil Culture. Where his role is always honest man, shows bravery, helps damsels from distress and a hard worker. His films always portrayed positive side of life. His dialogues are one liner.

There is still a question is MGR a good actor? MGR’s films are action movies. There is less scope for acting. His beautiful performances were average in Box office. His best acted pictures were “Pasam” – Love which is only flop is his film career, “Petralthan Pillaiya” , “Neerum Nerupum” the second character Karikalan, but his fans only expected his smiling face, his coolness, his different kinds of Fights and Duet songs mostly enacted as Dream song with fantasy background and colourful costumes. To me MGR is a best actor who always underplayed his character; his role can be seen as an average Tamilan. But his characters actually projected him as a Super Hero.

From 1961 to 1966 MGR films were released 3 to 4 months gap. His role made people believe that MGR is a Super Hero. Now will a question arises his is a real Super Hero. The answer came in 12.1.1967 when he was shot by another Actor M.R.Radha, not in the shooting set in MGR’s own home. The bullet pierced his throat but did not come out. The whole Nation shocked on hearing the news. Millions thronged the hospital MGR admitted. He was born once again, his solid Will Power made him to stand in front of the camera this time with more vigor and ebbing youth ness. But only thing he lost was his voice clarity. His dialogue delivery sometimes appeared childish and gave another meaning. But his fans liked the way he spoke. His Fans never let their Super Hero down.