Lets take a time travel to 22nd August 1958 the day "Nadodi Mannan" (Wanderer and King) released, the response for the film was excellent, a huge success and created a revolution in film making. A film released nearly two decades ago, when Cinema Technology was in nascent stage, when there was no Digital Theatre Sound or No Surround Sound playback and not even Stereo recording. What will happen when the same movie released now?

Imagine the same movie has to compete with the Young Hero films, those films having all sort of sound effects, and as well as CG effects. But still "Wanderer and King" is in the Toppers list. New films generate Rs.50,000/- per week as revenue for the Theatres alone. But "Wanderer and King" generated and still generating Rs.1,50,000/- per week. (Source 'Daily Thanthi') MGR is still the King in Box Office collection.

What does the film tells about? Is the film showcases scintillating Action? Rip roaring Comedy? Or Lengthy dialogues (as it is a protocol for the Old movies and also if it is a Historical one) the answer is big "NO"

Then how is the film is still a favourite? The film narrates the different back ground of the Rich and Poor. The revolutionary way to liberate the Poor and oppressed saying it in simple word "Socialism"

The film has Action not fully, Rip roaring Comedy – Limited, Lengthy dialogues – No, instead lot of catchy one liners, there was no Computer Graphics in 1950's the Double Action scenes shot in were by mask technique, which gives us a feeling of Two MGR acting. As a thumb rule for a mask shot the camera should not move. But the Camera moves in "Wanderer and King" not in just one scene but more than 4 scenes. To my knowledge if my guess is right MGR should have used Back projection in two scenes. The songs are prophetic, the sets are sumptuous, and costumes are lively and vivid. Finally what MGR said in the movie, he did in his life and typical MGR formula, and these are the important ingredients that turned into a Money Maker movie.
Posted by Roop No comments:

The Story of Wanderer and King:

Rathinapuri is a country ruled by a King who had a Girl as his heir, but the Raja Guru (The Chief Priest) without others knowledge kidnaps the little princess and raises her in his own now known to the outer World. He has a plan to rule Rathinapuri later. Though everyone searches, all goes in vain. After some years the Old king dies. Now New King has to be appointed there were two rightful heirs to be elected King one is Pingalan and another Marthandan (King). The Chief Priest likes Pingalan as he can be easily made a puppet. But most of the consul and the Commander wishes Marthandan to be anointed as the King. The Chief Priest accepts and plots to kill Marthandan before the coronation.

Same time due to misrule of the Officers and wars, make rebel groups emerge throughout the Kingdom and give annoyance to the Monarchy. Of that Veerangan (Wanderer) who is a farmer turned Soldier becomes a rebel leader and propagates the evils of Monarchy and was flung into prison. There he meets a girl who is a member of another rebel group headed by the Old king's body guard, as there thoughts are same there heart beats in love rhythm. (Marthandan and Veerangan are exactly alike) Due to coronation most of the rebels were pardoned for their crime. Veerangan comes out of prison and mistaken as the New King in disguise.

As the coronation ceremony nears The Chief Priest puts a lot of conditions in the name of Astrology and makes Marthandan separated from his wife and was housed in a separate castle guarded by his Commander. He arranges for Marthandan's assassination by means of poisoning by his most trusted Cook.

One rebel group mistakes Veerangan as the new king and tries to kill him. And Veerangan escapes from the duel and fortunately for the people and unfortunately for the Chief Priest meets Marthandan. The New king comes to know about the problems poor faces in their daily life. Marthandan promises that he will look through the problems after he was sworn in as the King. On that night during the dinner the poisoned drink makes Marthandan unconscious. The news reaches the Chief Priest and tries to make Pingalan as the King.

The Doctor advices about the condition of the King, that he will be alright and he will conscious after 2 or 3 days due to the effect of the poison. The commander convinces Veerangan to act as the King only for a day. Veerangan accepts and rushes to the coronation ceremony. And in right time takes the crown and sceptre in a dashing manner. The Chief Priest did not believes, that Marthandan is alive some thing should have happened. He orders his men to rectify his doubt and there the King was captured and taken with them, and kept in a dungeon.

After the ceremony, the Commander comes to know the drama of the Chief Priest and again convinces Veerangan to continue as the King. Though Veerangan is not willing to be in Power but he accepts and lays many revolutionary ideas that will change the condition of the Poor and oppressed. All upper class in the country is against the new orders.

Same time Veerangan reaches the Island, and accidentally enters the queens chamber, there he sees the princess and tells everything about her and ask her to help him in finding out the Real King, she accepts tells the place of the Real King were he was held captive and also she fell in love with Veerangan. Shortly Pingalan also enters the chamber and lures her and abducts. Veerangan comes to the rescue and finishes Pingalan in the sea. (But he was to be resurrect in the Second part of the movie)

In the Eagle den the King comes to know by Pingalan's aide about the whole story and how he was held captive there by the Chief Priest. He tries to escape from his captivity on progress unfortunately he was hurt on the head and fells unconscious. Veerangan comes in time and saves the King from drowning. And both of them unite to save the Princess and fights to finish of the wicked plans of the Chief Priest. And finally after reaching their country the Real King puts the end to Monarchy.

The movie was inspired by the stories of "If I am a King" and "Prisoner of Zenda". Actually the story was started to grow wit

h MGR when he entered the film Industry. When the time was ripe he started to shoot the film. MGR stopped to work in other films and dedicated his entire force as well his wealth to making this Film. He was very concerned to his make up as he has to do the two leading roles, the heroine Banumathy has to wait longer than usual and she was not ready to wait and MGR has no other choice other than as a Director, to kill the heroine in the movie. And saw the debut of Sarojadevi as the new Heroine, one of the best loved pairs of his fans. 10 minutes after Intermission the film was shot in Colour. MGR was very bold to take this move, in the history of film making either the film was fully black & white or Colour. But MGR took the risk by moving over to Colour.

Re-Release and Reaction - Part I 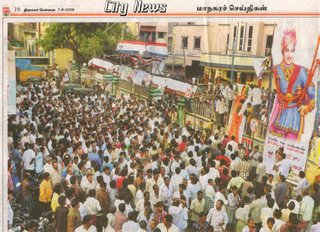 MGR's first directorial film "Nadodi Mannan" (Wanderer and King) was re released in Chennai city after 12 years. His fans thronged the Theatre and behaved as devotees and performed 'Abishekam' (In Hindu tradition Pouring Milk over a Idol is a respect and make the God happy) to their Demi God MGR. Look closely accompanied picture you will conculed the Fans age group is not more than 40. 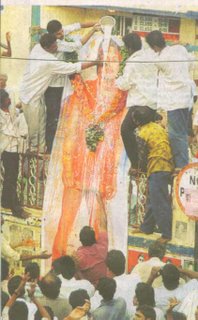 nd they astounded by the behaviour of the Fans like throwing flowers, lighting camphor etc., and also they telecasted the news several times.

After MGR's recuperation from his illness in 1984, whenever he tours the Southern Districts of Tamil Nadu he always asks Dr.V.V.Muthuswamy (Cardiologist) to accompany him.

On one occasion MGR was staying in Ashok Hotel in , and Dr.V.V.Muthuswamy was working in , on that day Officials from Police Department rushed to Dr.V.V.Muthuswamy and asked to meet the Tamil Nadu Chief Minister MGR urgently. He went to the Hotel were MGR was staying. There he was taken aback as he saw MGR was in unconscious state, it was a shocking state for him, as he always seen MGR in ebullient state. Tears rolled from his eyes on the mere sight.

Dr.V.V.Muthuswamy started his regular procedure of taking E.C.G. in 12 positions. On completing the 10th position the E.C.G. machine prompted for the insertion of paper roll, which he had forgotten to take with him. Imagine his consternation that he is taking care of a person who is elected by Millions, he said to himself go ahead and try once again, and as a miracle the machine worked giving the remaining 2 positions.

After finishing the examination he was satisfied that nothing serious and MGR needs some rest. And then he opened the machine and saw there wasn’t any bit of paper remaining. He was mystified that some force had worked giving out the last bit of paper to conclude the test. Even today Dr.V.V.Muthuswamy feels the event as a miracle.

Even though MGR had a panel of Senior Doctors to check his health regularly, MGR always asked him to stay with him. He cherishes the brotherhood nature that MGR showered on him.

Emperor of Tamil Cinema Strikes Back 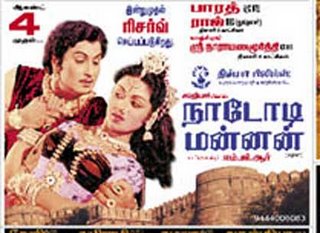 The First picture is the Newspaper Cut out of MGR directed film "Nadodi Mannan" (Wanderer and King) released in 1958. I have not taken this cut out from Old 1958 magazine. This is the 3.8.2006 edition of "Daily Thanthi" Those who don’t know Tamil, what is written in the advertisement is the film is going to be released on and Advance booking is advised. 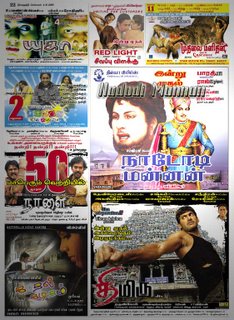 The other picture shows MGR film advertisement and other New Movies that are currently running in . Note that MGR film ad is bigger than any other movie ad. And do take into account that this MGR film is a re release. After 48 years "The Emperor Strikes Back"

This is a test for tamil blog
Posted by Roop No comments: