The 1975 Blockbuster movie and Puratchi Thalaivar MGR starrer Ithayakani was re released in Mahalakshmi theatre this week.

The above image was taken on 7th December, time 5.50 pm. Thought this much people only came to watch.

The most famous pose of MGR, no need to mention the movie title the pose itself is enough. 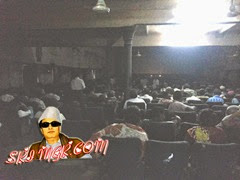 A part of the crowd inside the theatre taken during the interval of the movie. The theatre had 75% occupancy even the movie was shown in Sun Life channel the previous day.

As usual the print is bad but the movie had 30 minutes long interval to compensate the cut of the movie. Most of the reel had MGR colour print (runs only in one colour that is pink).

The first scene of Ithayakani movie and the response to our beloved Leader MGR.

Above video had to be enhanced for brightness and sharpness. For viewing pleasure the video resolution reduced to 352 x 288 pixel size as the original video looks very much blur.