We have already uploaded two videos of Ithayakani movie which was re released in Mahalakshmi theatre two weeks back. In this post we are uploading another two video clips. 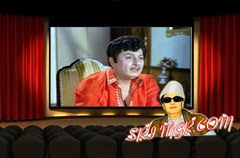 After the marriage in coffee estate the couple arrives to get the blessing from his mother. Followed by astrologers advice of separating the married couple for one month.

Click the above image for the video clip of Inbamae song. As the print and the projection is bad the clip had to be enhanced for brightness, pardon for the picture quality. Watch how MGR fans enjoyed the duet song. In the song when the heroine mentions our God MGR as Vallal (noble) the theatre became thunderous. 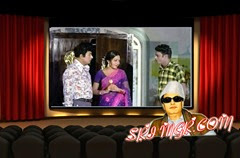 The second video clip given below is the political dialogues uttered by our Puratchi Thalaivar MGR and the characters of the movie.

Click the above image to play the video clip.