This was an ad placed by Diamond Pictures for the re-release of Ulagam Sutrum Valiban in Chennai as DTS from March 11th 2011. This movie was already re-released in DTS format in 2008 and we have given round up about the article by the title named ‘MEGA RELEASE” and the post was completed in 13 parts, the link is given below. 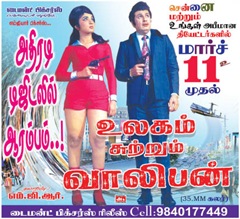