When ever I write a new Post and publish I receive less comments just one or two. When the topic shifts to MGR Movie records I get various kind of comments from MGR Fans as well as from Nadigar Thilagam Sivaji Fans. The post for comments will come within 2 to 3 days. Some post will comments nearly after three or four months. I posted about MGR's Picture festival on December. By the end of February I received a comment from Mr.Pradeep Balu saying him the Grand Son of M.G.Chakrapani and MGR. I first thought some one is trying to play practical joke. Because I felt why should such persons will try to contact me, what great thing I have done to MGR. I did not answer to his email. This month too I received two comments one with his mobile number. Then I contacted Mr.Pradeep Balu just two minutes talk and when contacted daily. I asked more about his family and he gave the details which I want to share with MGR Devotees and MGR Fans. 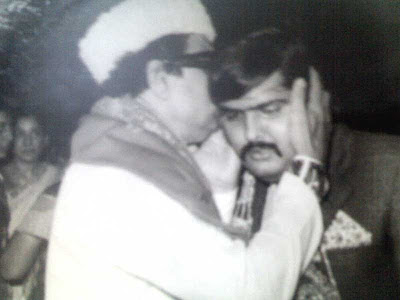 PRADEEP BALU Son of M.C.Balu (9th son of M.G.Chakrapani) M.C.Balu is a singer he had a troupe started with Abaswaram Ramjhi, an Ad film director and ADMK Party Worker. He actively participated in ADMK party. M.C.Balu passed away one year back, his wife a writer in Andhra Pradesh and daughter of the famous film writer and novelist in Andhra Pradesh named Palagummi Padmaraju. Pradeep Balu was born in the year when MGR came to power. 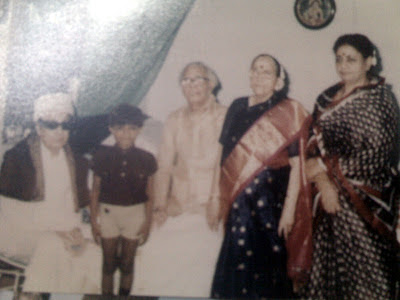 Pradeep Balu was to be debuted as Junior MGR in Tamil film unfortunately that did not happen. Then Junior MGR Pradeep concentrated on Film editing. He worked as Assistant Editor in various movies such as “Bambhara Kannaley”, “Azhaga Irukirai Bayamaiga Irukirathu”, “Thiruvillyadal Arambam”, “Kannum Kannum”, “Sabari”, “Deepavalli”. And he worked for five Hollywood films shot in RAMOJI FILM CITY in “Crocodile-2- death roll”, “Quick Sand”, “In the shadow of the cobra. He was credited for Assistant Director for Beeper, and Centipede. After 12 years of Hard Work Junior MGR got to work independently it is again an English co produced by Walt Disney named "The Family Picture" Directed by Umakanth. 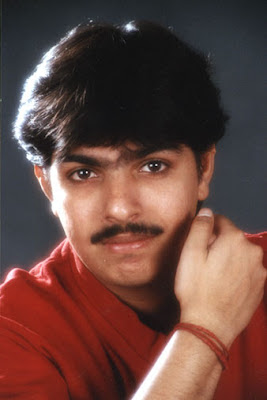 Junior MGR is the only person from the MGR family to be in Film Industry. Junior MGR Pradeep Balu wants to achieve something in this film Industry and prove that his grandfathers a good grandson.

LET US (MGR DEVOTEES AND FANS) PRAY FOR JUNIOR MGR SUCCESS IN HIS CAREER.

The images are provided by Jr.MGR Pradeep Balu, from his Mobile, with his consent I have produced some of the words from his email. He has promised me in giving the scanned pictures of MGR and his family.
Posted by Roop