In 1978 last MGR movie was released, though the movie was already completed in June 1977. The movie story is from Akilan titled Kayalvizhi the project was produced and directed by B.R.Panthalu and in the middle he died the project was shelved for long time, then MGR directed the remaining part of the movie with another producer and released his last flick in January 1978. 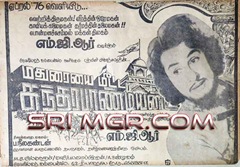 The above ad shows that the movie will be released in April 1976, the ad was given in Makkal Kural on 20th November 1975.

The second and final movie released when our beloved Leader Puratchi Thalaivar MGR was the Chief Minister. 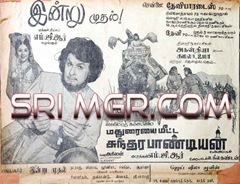 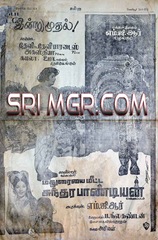 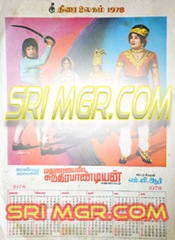 The above image is the 1978 Calendar given by Thirai Ulagam for the release of last MGR movie Madurai Meeta Sundarapandian. 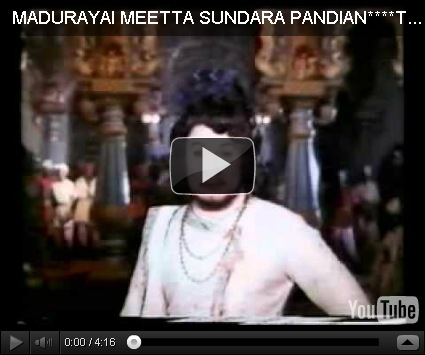 Above is the Philosophical song from Madurai Meeta Sundarapandian taken from Multi Abdul Gafoor uploader in youtube.

K.Kannan who acted as Kosala King in that movie narrates MGRs techniques in filming the long scene into one shot.

At 2 pm MGR handed over 7 page dialogues to Kannan and asked him to by heart the dialogs and the shot will be ready by 4 pm. Since it is the last day of shooting in Jaipur, if the scene does not end by 5 pm (as the Sunlight gets weak) they have to stay another day.

Kannan was eager how MGR will shoot this lengthy scene. Within two hours MGR fixed 9 cameras and no camera is visible to other camera angle. His placement of 9 cameras was checked again. 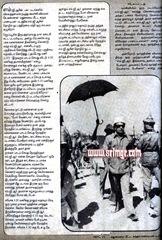 By 4.15 pm MGR said "Action" then Kannan as the King and Latha as Kayalvizhi spoke the 7 page dialog without any mistake and the shot was ok. And further Kannan says that to shoot that scene it will normally take one day to complete but MGR's brilliant mind completed the scene within 15 minutes. MGR's Cinema technology mind is far ahead of others of his day.

This is the video clip showing the work of nine cameras and also the editing brilliance. Total duration of this video clip of nine cameras is 2 minute 10 seconds. I checked the clip and counted the cameras it came to 10 and I checked again with one person view and it came to 9. Please check yourself and write your comments through email id: replytomgr@live.in, were and which the camera are placed.

All the nine cameras are placed to capture the Soldiers and Elephants 1000 in number. The last 15 second of this clip is from 3 cameras side by side on the right side of the characters played by K.Kannan and Latha. A frame is not missed. Watch the clip. This clip is not only for the camera work of those days (MGR movies) but also the editing techniques used in those days. 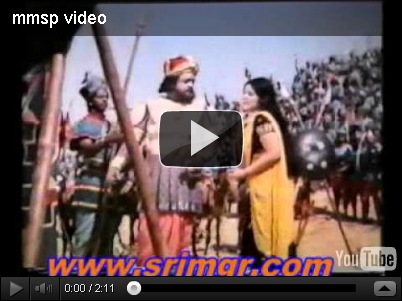 As said by K.Kannan this camera placement was done by MGR with a map and his editing mind. This kind of camera work is done to other characters and not to important MGR character. That shows MGR's good nature to other actors. Who will allow such a first time feat featured by other actors in this Tamil movie world? And I don’t know which one camera MGR has handled.

The above nine camera is from our blog previous post.