The year 2017 is the birth centenary of our beloved Leader Puratchi Thalaivar MGR, not only Tamil Nadu celebrated but the Tamil world honoured. Below is a lengthy article written by DBS Jeyaraj and which is published in "Daily Mirror".

January 17, 2017 was declared a holiday in the Southern Tamil Nadu State of India. This was to acknowledge and celebrate the birth centenary of Marudur Gopalan Ramachandran or MG Ramachandran who served as chief minister of Tamil Nadu for 10 years from 1977 to 1987. It is the political party he founded in 1972 -- the All India Anna-Dravida Munnetra Kazhagham -- that is in power today in the State. Various events were held throughout Tamil Nadu to honour the memory of a larger-than-life personality known to millions of people by three letters of the English alphabet denoting the initials of his names - MGR.

MGR though ethnically a Malayalee made a name for himself as an actor in Tamil films and followed it up by becoming the Chief Minister of Tamil Nadu State. MGR who started acting in minor roles from 1936 got his major break as lead actor in 1947. Thereafter for 30 years till 1977 he was the uncrowned king of Tamil cinema as the biggest box office attraction of them all. The swashbuckling actor starred as an action hero in more than 100 Tamil films. In a film career spanning four decades from 1936 to 1978, MGR acted in 136 films. Most of his movies minted money at the box-office. This was the time when the magical initials MGR was a household name in the Tamil-speaking homes of countries with a substantial population of Tamils, including India, Malaysia, Singapore and Sri Lanka. MGR had a huge following of fans in Sri Lanka during the time he sparkled on the silver screen. Among his fans in the Island were a large number of Sinhalese and Muslims too.


Today is the 70th Independence day of our country. And we wish to convey our wishes to all our blog readers and MGR fans around the world.

Couple of months back I traveled to Kerala and met my father's friend who had settled after his retirement from government service. I had already posted some pictures given by him in our MGR blog. For this special occasion I had planned to publish all the photos of our beloved Leader Puratchi Thalaivar MGR hoisting the tri colour in Fort St.George from 1977 to 1987.

While I was scanning the newspaper cuttings in one computer centre the person who did the work asked me in Malayalam "E- alau marichu poi ethoraiyo kollam ayi, pinney endina ithu" (this person has died so long ago what you are going to do with this) I replied in English "for you he is a dead person but for us (Tamils) he is still living in our hearts". 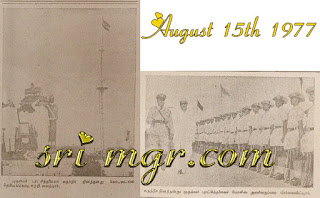 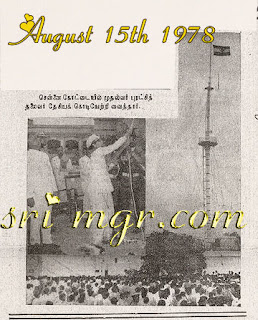 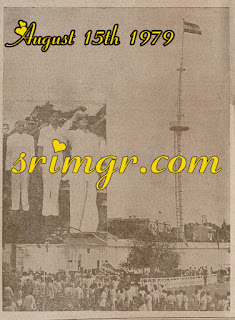 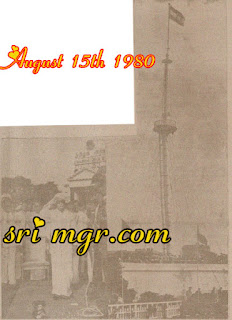 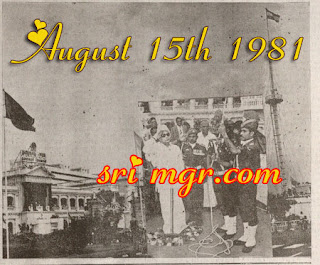 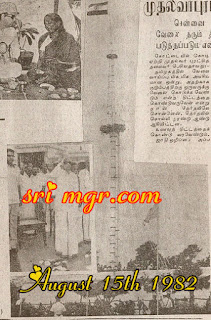 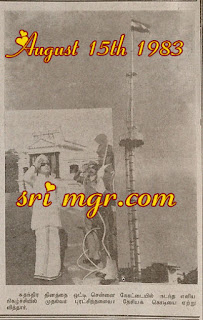 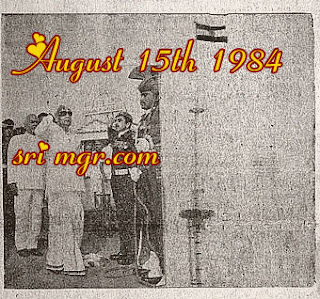 After his illness and recuperation, MGR returned to India and took office from 1985 to 1987.

In 1985, instead of the Chief Minister, the Finance Minister V.R.Nedunchezhiyan hoisted the flag, and in 1986 MGR hoisted the flag for the last time. And in the year 1987 our beloved Leader Puratchi Thalaivar MGR left for medical check up in August 8th 1987 to New York, US. 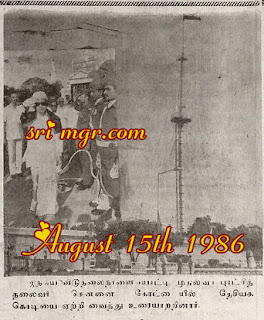 
Amalraj Pictures hit movie of 1974 Netru Indru Nalai is re-released this week in Mahalakshmi theatre. I took couple of pictures outside the hall. I like to share one which is posted below.